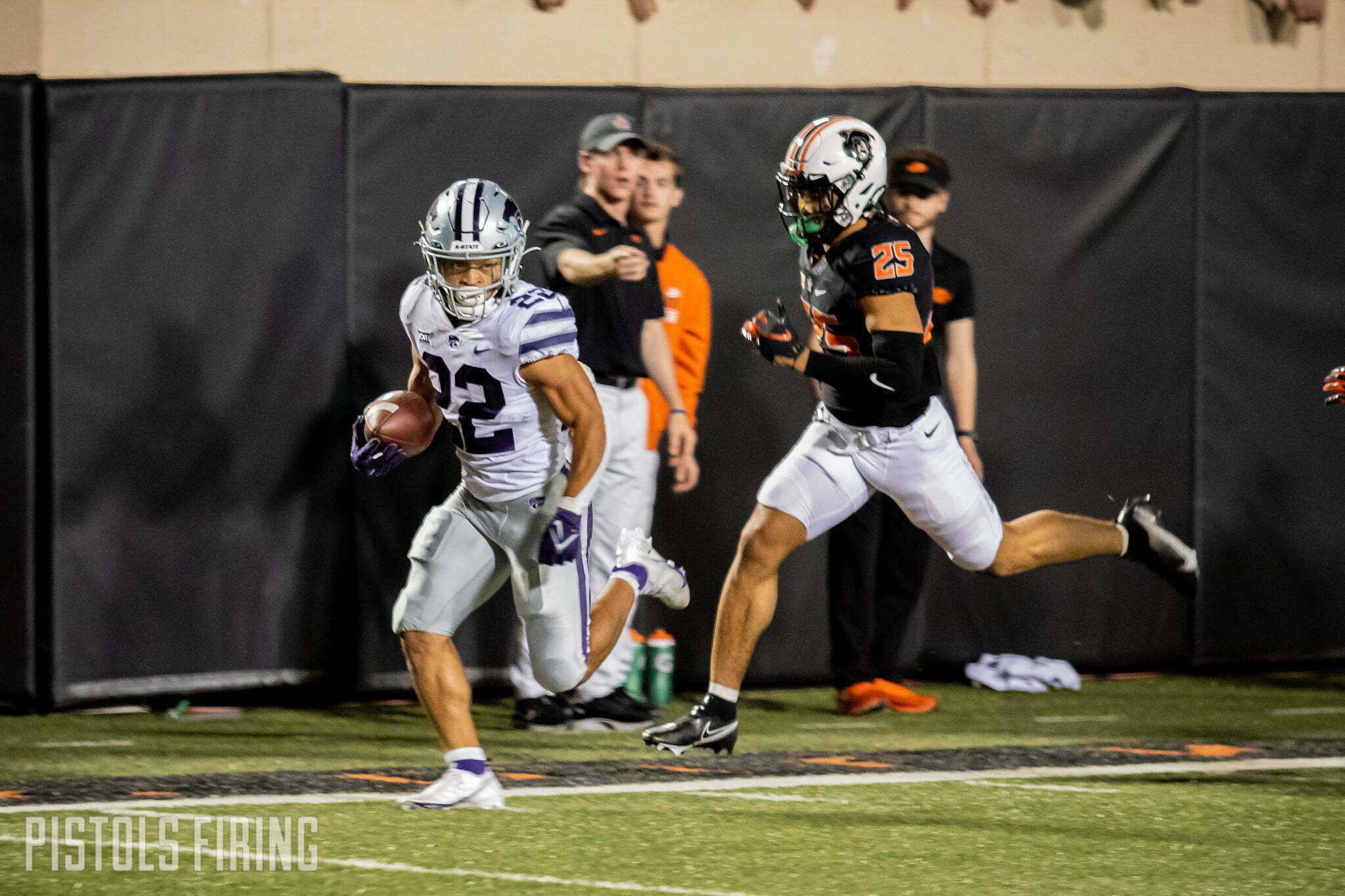 While there has been no shortage of football news this summer, there will be actual sports to be played before we know it. So let’s take a brief pause from your regularly scheduled conference realignment news for some football talk.

We’ve already looked at some of the quarterback storylines for the Big 12 in 2022, now let’s look at the running back position.

I looked at the returning rushers and projected depth charts up and down the conference for this coming fall and here are some of the tailbacks to take notice of.

There were three Big 12 tailbacks that landed in the Top 10 in rushing nationally last year: Vaughn, Baylor’s Abram Smith and Iowa State’s Breece Hall. The last two are now in the NFL and the first was an underclassman.

Vaughn followed up a breakout freshman season by leading Kansas State with 1,404 yards and 18 touchdowns on his way to an All-Big 12 First-Team Selection. According to Pro Football Focus, Vaughn was responsible for 59 plays that resulted in 10 yards or more last season, the most among Power Five rushers. Expect that to continue in his junior season.

Vaughn may boast the numbers but Robinson boasts the sex appeal. Robinson should have a more well-rounded offense to support him (more on that below) though both are welcoming new starting QBs. While Vaughn will share a backfield with a dual-threat passer with a propensity for picks in Adrian Martinez, Robinson will provide pass-protection for a former No. 1 overall recruit in Ohio State transfer Quinn Ewers.

Let’s be honest, if a Big 12 tailback is going to get a shot at the Heisman, he’s going to have to put up big numbers on a big offense — and probably have to win some big games. The jury’s still out on whether Texas can facilitate No. 3, but I think Robinson is a lock for the first two.

Don’t throw anything but I included both Bedlam backs in this spot because both will be asked to come into their own behind an outgoing star.

Richardson has shown flashes of his star power during his first two seasons in Stillwater. With mounting injuries to Chuba Hubbard and Dezmon Jackson, OSU went with the rookie off the bench against Baylor in 2020 and he responded with a heroic performance. Only Thurman Thomas has rushed for more yards in a game as a Cowboy freshman.

As Jaylen Warren’s backup last season, Richardson continued to make plays and posted outings of 79, 134 and 84 yards, respectively, while still being tabbed RB3. With Warren and Jackson gone, will Richardson be able to take the offensive load?

Much like Richardson, OU’s Eric Gray has been biding his time over the last couple of years but he’s got even more plays on tape.

With Kennedy Brooks gone to the NFL and quarterback Caleb Williams gone to Southern Cali, Gray is the Sooners’ leading returning rusher.

The senior comes in with loads of experience, over 1,700 yards and 10 touchdowns over his three years in Norman and at Tennessee. With the Vols in 2020, Gray recorded four 100-yard games and totaled a career-high 772 yards. Behind Brooks last year, he amassed 78 carries for 412 yards and two scores as well as 23 catches for 229 receiving yards and two more TDs. His style should fit in nicely with first-year Oklahoma OC Jeff Lebby’s new up-temp offense.