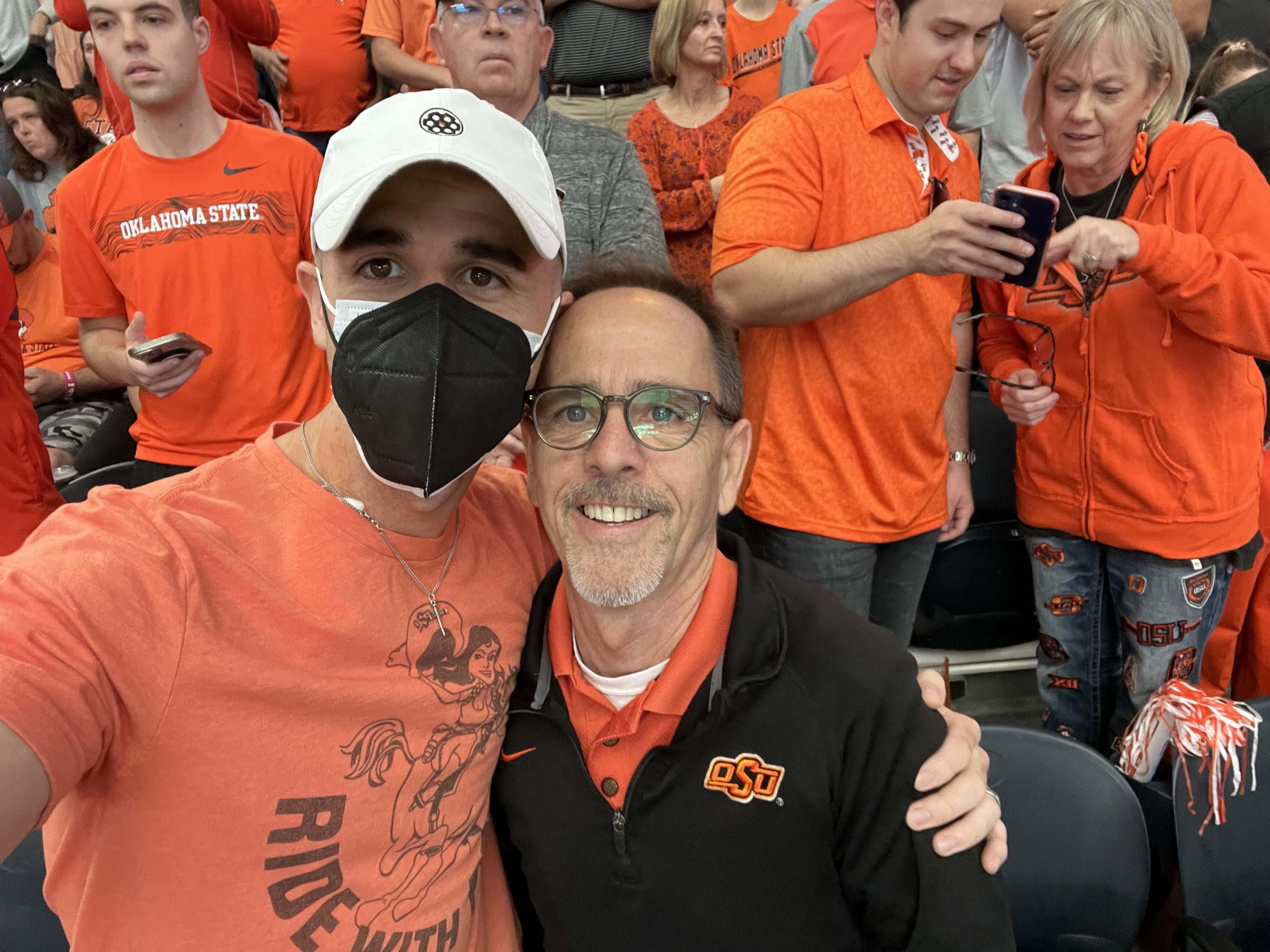 I love college football. And growing up, I was encouraged strongly expected to love all things Oklahoma State. My dad graduated there long ago and practically everyone on the Boone side of the family did, too. So my dad — and, really, our whole family — have always had that in common. It’s been a shared joy, mostly, but admittedly it has also been a common topic on which we could commiserate over the years.

We’ve shared that together with unforgettable (both good and bad!) experiences across sports. We were there for 2013 Bedlam football, for instance. And we watched baseball together in Bricktown on several occasions, including once where we dragged my father in law — a KU fan — to join us. I still remember the amazing seats and the experience but couldn’t tell you what happened on the field, and I think that’s how I view a perfect memory — not the event but the experience of it.

So after learning at the first of December that my cancer had returned, my dad made sure we could experience the Big 12 title game together as well. After I spent weeks upon weeks pleading for him to go to Bedlam because OSU > OU looked pretty obvious from the eye test, which he ignored, he wasn’t about to miss out on a Big 12 title game opportunity with OSU surging into a potential spot in the playoff.

So we went together. Me and him. It was the culmination of a pretty emotional week for our family, and OSU’s loss … well, that didn’t exactly make the drive back to Tulsa shorter. But we had a great time. And so I wanted to write about my time with my dad.

Before we could make our way to the game, we first had to get me patched up and ready for chemo, which my doctor decided we’d start the next week on Monday. So Friday morning began with a trip to Saint Francis to have a port procedure. I didn’t get a port the first time I did chemo but this time, because of the volume of treatments and the ease of access for everyone, I could no longer opt for vein-only treatments.

Thankfully they put me under for the quick thing and placed the port just beneath the surface of my skin on my chest.

Had to get to the hospital at 7 a.m. for a 9 a.m. procedure so, yeah, that took a big chunk of the morning. And I’d be lying if I told you I was prepared to deal with an actual “procedure” on travel day. Port placements are common, of course, but being put under, dealing with a new hardware bulging out of your chest and the soreness of surgery were not ideal for the trek to Dallas.

STILL, I knew all of it was going to be worth it for what was at the end of our road trip on day one: SHAKE SHACK.

I’m a sucker for burgers, and for shakes, and knowing Shake Shack has elite shakes and burgers made this a must-have for our first meal of the trip. We don’t have this in Oklahoma; we have Braums. And Braums is … fine. But Shake Shack, it is not. If you see the two on the same eating playing field then we can’t be friends.

I had two burgers and ordered cheese fries. No Eskimo Joes, but they still slapped. It was the first time my dad had ate there since we tried it a long time ago together on a family vacation to New York. I’m not sure how impressed he was, but he did make note that the patty folds over the bun and that was neat to him.

We finished the night staying at the apartment of one of my mother’s closest friends. Walking up the stairs I noticed I was waddling, confirmation that Shake Shack did its job. Two burgers, shake and fries was a lot of food — even for me.

I can’t start my day without coffee like most brave patriots across the country. So dad and I agreed breakfast and coffee away from Arlington were musts before the 11 a.m. kick.

We found both at First Watch. It’s one of my favorite breakfast places and a place my wife and I share a love for, so finding one close to the place we stayed at was a pleasant surprise. I had the breakfast tacos. Nom nom. No pics could be snapped. I got them and immediately scarfed it down on their outdoor patio. I Facetimed my wife who was equal parts bummed to miss the meal and equal parts bummed to miss the meal with me. It was the first food we ate after we got engaged in 2015, so it holds a special place in both our hearts.

My wife loves the pancakes there — they are HUGE — but honestly anything First Watch is top of the line. Great food, great service, great chain. Got us charged for the game.

Traffic getting into the stadium was a madhouse, but we made it inside with plenty of time to spare before kick. Great seats, too. Can’t overstate just how much of the vibes were won early by OSU fans. They brought the smoke. Orange pom-poms were flying all over the place.

I’ll skip my recap of the game as a fan. It was spent mostly pacing back and forth, honestly, and that was something in common a ton of OSU fans had with me at the end of the game as we all held our collective breaths and watched as OSU went for it on fourth-and-goal. Pain.

When in Rome, right? We had to indulge in the delicacies that In-N-Out offers. It was a delightful trip. Cheeseburger and fries, both animal style, and of course a shake to boot did the job for me. OK, there’s proof I lied: I got two cheeseburgers. Sue me!

OSU losing by 14 touchdowns would have been easier to swallow than losing the way it did to Baylor with the title game and a potential CFP appearance on the line. That much I freely admit. It stung a bit.

But it’s just football, right? And in the grand scheme of things football is really not on the list of things that should have the power to sway my mood.

Instead, I came away deeply thankful for quality time with my dad. The season didn’t go as we expected in myriad ways — no one thought they were good-enough to be ranked in the preseason then they had a chance to be in the playoff. For me it made the 2021 season that much more fun. The unexpected is always so much more enjoyable than the expected. And to end the season with my dad by my side, as I clutched him while Dezmon Jackson’s outstretched arm for the pylon came up just short, felt like just the right place to be. We’ll remember this experience forever, and forever we will commiserate about it because, well, that’s what we do. But experiences like this over the years have never been only about the game, anyway. And after the last year it was just another reminder for me to cherish the experience and not the event. OSU could’ve won the conference and that would’ve been fun. But I had a great time with my dad. That’s what I’ll lock away in my memory box and treasure.