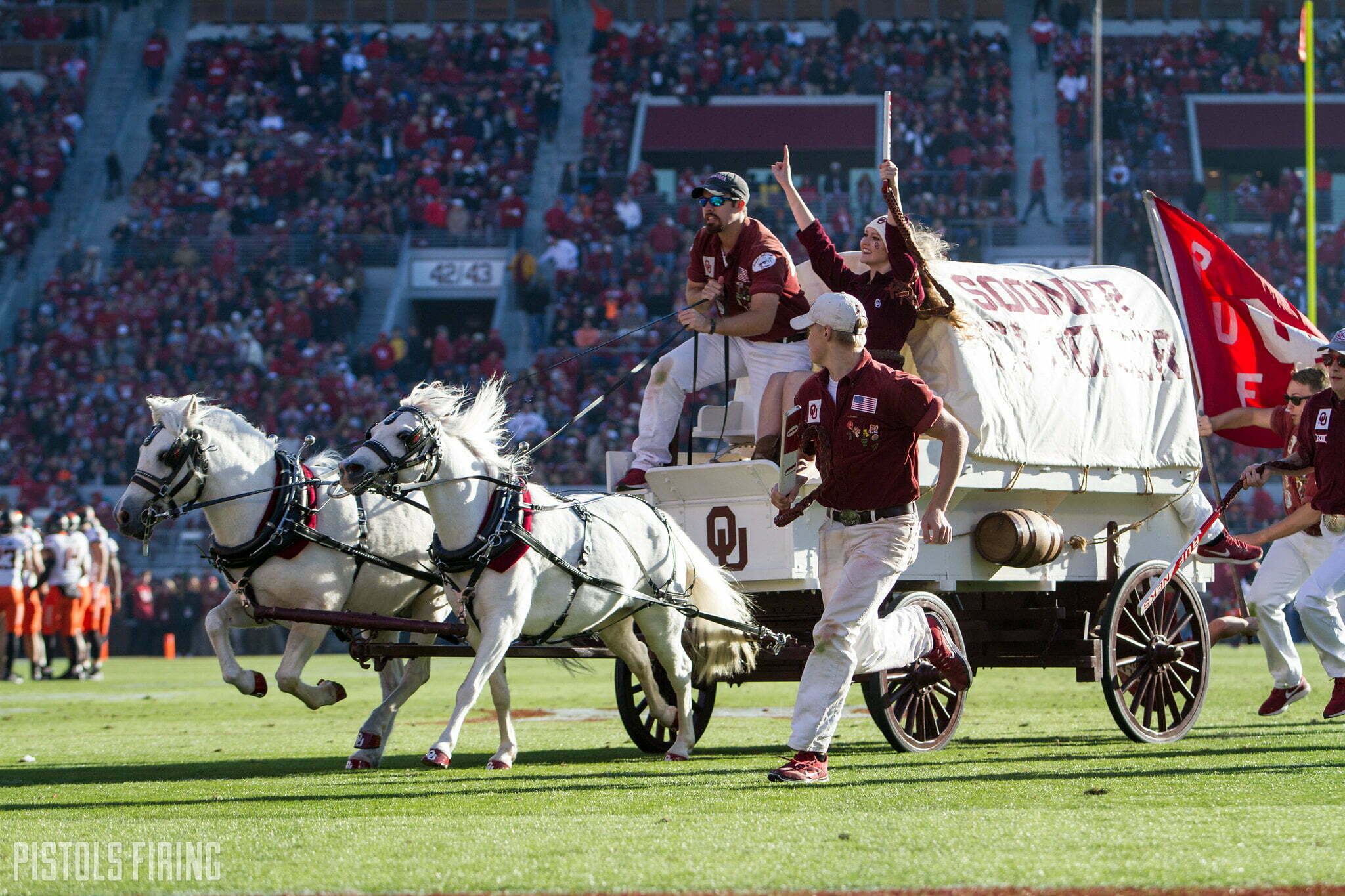 Some Big 12 games were closer than expected in the second full weekend of conference play.

After a strong nonconfernce showing for the league, the Big 12’s true contenders are starting to show. Here is a recap of this weekend’s action, starting with conference standings.

This one started out much closer than expected, but OU found its stride in due time.

Heisman hopeful Jalen Hurts had 284 total yards and four touchdowns. He did, though, throw his second interception of the season in the third quarter.

Junior running back Rhamondre Stevenson was dominant in limited work. In only five carries, Stevenson had 109 yards and a touchdown. A junior college transfer, Stevenson got a tackle on the ensuing kickoff after his 61-yard TD run.

Come for Rhamondre Stevenson's 4th quarter touchdown, stay for his tackle on the ensuing kickoff. pic.twitter.com/MglIUJnV5L

All things considered, the Jayhawk backfield had a decent day. Quarterback Carter Stanley had 230 yards, three touchdowns and no interceptions, and Pooka Williams ran for 137 yards.

OU has it’s first big test of the year next week in Texas. Kansas has a week off before it plays Texas.

West Virginia might have pulled off quite the upset if it wasn’t for Austin Kendall’s four interceptions Saturday.

Kendall was also responsible for all four of the Mountaineers’ touchdowns, throwing for three and running for the other.

Sam Ehlinger wasn’t outstanding, but he got the job done, completing 18 of his 33 passes for 211 yards and two touchdowns while running for 56 yards and another two scores.

Texas running back Roschon Johnson had a nice day, running for 121 yards on 21 carries.

Texas will welcome Oklahoma across the Red River next weekend. West Virginia will host Iowa State.

Like with the game above, turnovers were the story of this one.

Spencer Sanders threw three interceptions and fumbled twice, as the Red Raiders upset Oklahoma State. Unlike with Kendall, who wasn’t sacked at all Saturday, Sanders was sacked seven times.

It was a big day for Jett Duffey, who started his first game of the season. Duffey threw for 424 yards and four touchdowns. He also ran for another score.

It was a career day for Tech linebacker Jordyn Brooks, who had 19 (!!) tackles, three sacks and four tackles for loss.

The Cowboys have a week off before hosting Baylor. Tech travels to Baylor next weekend.

Iowa State has been hot and cold this season, but the Cyclones were hot Saturday.

Brock Purdy threw for 247 yards and two touchdowns and ran for another 102 yards and two more touchdowns. Ten of Purdy’s 19 completions were to Deshaunte Jones. No other Cyclone receiver had more than one catch.

TCU still used both Max Duggan and Alex Delton, but Duggan got much more of the action. Duggan completed 68 percent of his passes for 219 yards and two touchdowns. Both of those touchdowns went to Jalen Reagor.

Iowa State travels to Morgantown next week for a game against West Virginia. TCU has a bye week before playing at Kansas State on Oct. 19.

There are only two unbeaten teams in the Big 12 and one of them is … (checks notes) … Baylor.

Charlie Brewer threw for 230 yards on only 14 completions.

After struggling against OSU last weekend, the Kansas State offense again had issues against Baylor. K-State was 6-for-17 on third down. Skylar Thompson threw for 218 yards and a touchdown, but he also threw an interception and lost a fumble.

The unbeaten Bears host Texas Tech next weekend. K-State is on a bye week before hosting TCU.