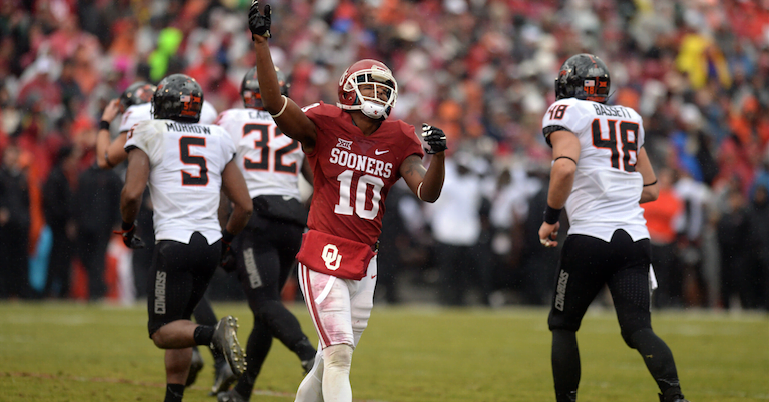 Going into today’s game, Oklahoma State knew what they had to do: Limit the big play.

It’s easier said than done. Even on a wet-field, the Sooners capitalized on their opportunities downfield.

“One of the things I had concerns with coming in was them getting big plays, and that’s what happened.” Gundy said after the game. “Unfortunately we played pretty good. In fact, maintained some quality drives and had some defensive stands, but they big played us.

The first big play was a back-breaker to the guy you know you can’t give it up to. The defensive front wasn’t able to get enough pressure, and Baker made them pay. When he’s able to extend plays with his mobility, he can go full-on backyard football on you. Which he did here.

The other guy that can make you pay is Joe Mixon, who ironically delivered what turned out to be the knockout punch. I thought the OSU defense showed a little bit of fatigue in the close. And it showed on this play specifically. They missed tackles, took bad angles, and let Mixon break loose for a big play that put it out of reach.

The big plays, even in the nasty rain and weather, were ultimately going to be what decided the game. And none of the biggest went in OSU’s favor. Oklahoma State has the guys to make them. They have James Washington. They have Jhajuan Seales. They have Justice Hill. All are homerun threats. But none could break loose for game-changing plays on offense.

“Overall,” Gundy said, “What really got us was their ability to make big plays.”