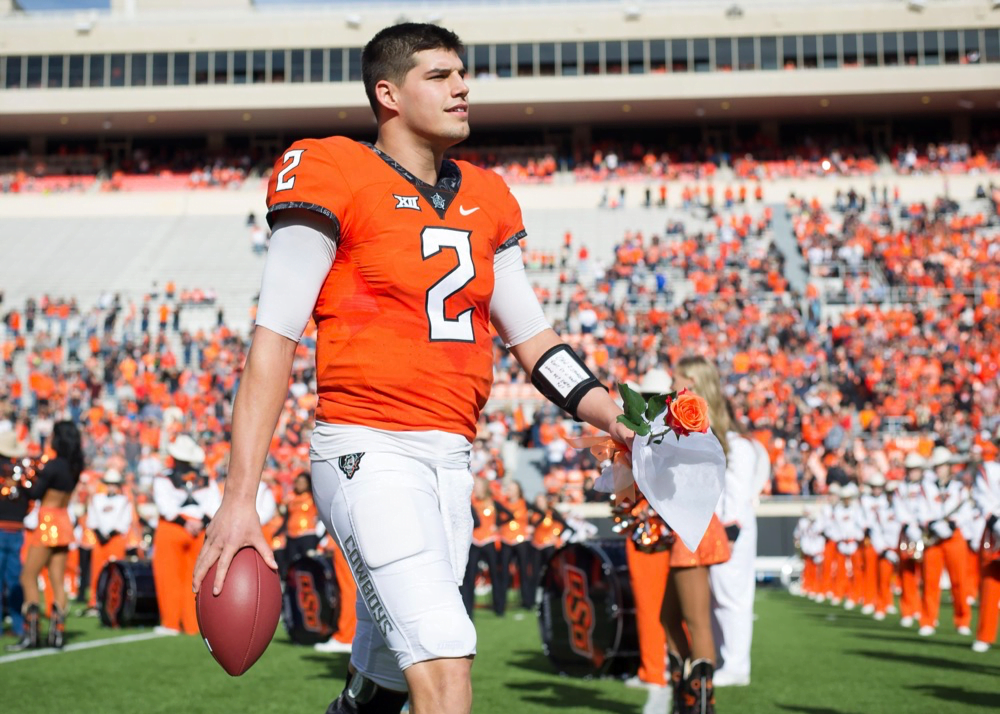 There were loads of memorable moments from Senior Day 2017 in Stillwater on Saturday. Little stuff that we’ve sort of skipped over in the last few years because the final game of the season meant too much. More attention on the pregame festivities, a curtain call at the end of the game and more chatter after Game 12 about the macro than the micro.

There was also a lot of thoughts about what could have been. TCU, OU and Kansas State. What if you could play those games again? What if this play or that one had gone differently. It felt like nobody really knew how to feel at the finale this year. A salute to some all-time greats as they took down … maybe the worst Power 5 program of the last decade.

It was a little like toasting your parents at their 50th wedding anniversary party with the cheapest whisky in the building because that was all that was left.

“Obviously the elephant in the room, I wanted to win a Big 12 title,” said Rudolph after the game. “That wasn’t in God’s plan. Everything happens for a reason. I’m going to stay motivated and continue to work. I want to be remembered as a guy who was completely committed, who poured everything he had into the program and was serious about it.

“It’s tough. You put so much into it. You envision it, you plan how you’re going to get there and things don’t go your way. You have to reassess and rally the troops. You don’t want to throw in the towel. You want to keep fighting and keep competing.”

Rudolph will be remembered a myriad of ways. Different people will see different sides. His legacy will be complex. But on Saturday, it was pretty simple. He got the loudest and longest ovations. He was QB1 one final time.

Mike Gundy removed his seniors on both sides of the ball during timeouts to get them a final round of applause before they exit for the bowl game and whatever they do with the rest of their lives.

We sent our seniors off in style. #okstate #GoPokes pic.twitter.com/B0HtWDW3u9

“You know I’ve never really done that,” said Gundy. “You see it a lot in basketball. I would like to say it was my idea, but it wasn’t. It was suggested to me. I’ve always been a little leery of it. I don’t want to be disrespectful of Coach Beaty at Kansas. I should have done it earlier … when you have that luxury I just think it’s right for what the players go through in their four years, and I just think we owe that to them.”

His defensive coordinator agreed with him.

“Yeah, you don’t see that,” said Glenn Spencer. “I’m glad we had a timeout left. It’s kind of hard to do on our side of the ball. That was a nice idea on Gundy’s part. It was a nice send off those kids deserved.”

It wasn’t a moment the way we’re used to defining them, but it was a moment. A nice, “maybe you’ll pull the video clip out once every few years to remember some of the greats” moment.

“It was cool,” said Rudolph. “It was cool to have coach Gundy do that the way they did. “I’ll remember it for a long time. A lot of seniors have done everything they can for Oklahoma State football. They’ve poured their lives into this place. It was cool for us to get honored together and go out in a special way.”

The final ovation in the fourth quarter was great. It really was. But the real moment for me came before the game when the seniors trotted out to midfield. It was Rudolph hugging James Washington’s family as they all posed for photographs. I’m not sure why that was the moment, but it reminded me that we are all getting older and we (and they) will never be exactly the same as we are right now. We’ll never be in this exact place with these exact people ever again.

As those seniors ran back toward the locker room together so they could sprint out with the rest of their team, the oddity of it struck me. You almost never see a small group running that way on the field. Out of the locker room, through the gate and onto the field? Yes, all the time. But back toward the locker room in a small pack, toward a group that they’ve grown up with, the people they’ll leave behind next year? Very rare. And with that collection of human beings? It will never happen again.

“This group is hard,” said Gundy. “Every year is hard. As I get older, I get a little more emotional. You just never know when it’s going to end. When you see those guys move on who have been with us, the character and the class is important and when you have a group like those guys it’s just tough to see them go.”

There are people in that stadium who attended their final football game on Saturday. Others who may one day make a run at some of these guys’ records. And others who may one day take over as head coach for whoever takes over for Mike Gundy. Mortality is never as close as it is when we honor the lives or careers of those we revere, and despite the meager crowd in Stillwater on Saturday, I was reminded of that.

I was reminded that the wins and losses are important, they really are. But so are the moments. So are the rides. So is a three-and-a-half year roller coaster. They’ll never experience anything like it again. Neither will we. Damn, it’s been fun. They all are.

This one more than most.

My last ride in BPS. So many memories. So many victories. So blessed. Proud to be a cowboy and focused on the future. #Gopokes pic.twitter.com/un7oAFtYVL