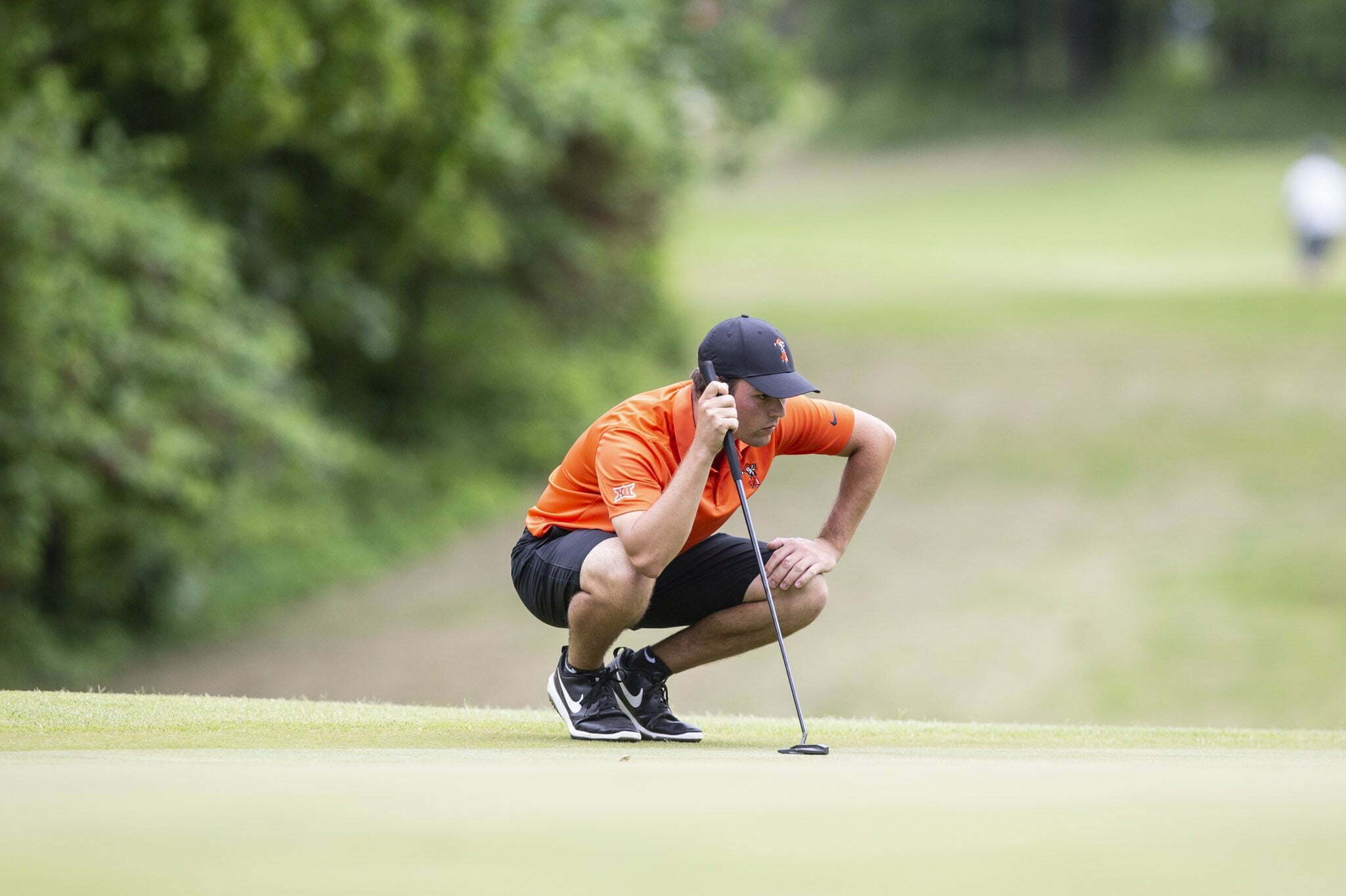 Oklahoma State leads the Stillwater NCAA Regional by two strokes after going 17-under as a team through Monday’s two rounds. Stark, a freshman from Kingsburg, California, was a big part in that.

Stark subbed in between rounds for Jonas Baumgartner, and Stark shot a 7-under 65. That tied the low round of the day with fellow OSU freshman Bo Jin. And Stark did so after watching most of the First Round.

“I knew before the round even started this morning, 6:30 or whatever, coach said, ‘Be ready,'” Stark said. “So we had a plan set forth. After nine holes, Coach [Donnie] Darr told me, ‘I’d start practicing right now and just get ready. I don’t know what Coach [Alan] Bratton’s gonna do.’ So I started practicing then and just warmed up like I was getting ready to play for the tournament. Then at 12:15 or so, Coach Bratton texted me and said, ‘You’re in.’ So I got 15 minutes to actually like fully mentally prepare for being ready to go.”

Monday’s performance was a part of a hot streak of form for Stark. A few weeks ago, he tied Viktor Hovland’s course record at Karsten Creek, shooting a 62. He also recently advanced to U.S. Open sectionals.

“Yeah, I kind of struggled a little bit in the middle of spring,” Stark said. “It was good Coach gave me a break, sat me down for a tournament. I just kind of reevaluated my game, and I realized that there’s not much I need to work on really. It’s just more mental stuff. I wrote some stuff on my glove, just gets me through it like if I ever have doubt or whenever I look at that.

“Sitting me down get gave me more time to practice my short game, and my putting and chipping has gotten so much better since then, just a month and a half ago or so. My game has been trending for the last month or so.”

Stark wrote SFT on the thumb of his glove for “See, Feel, Trust.” On the label he wrote “Be You.” He also wrote “John 13:7” on it, a Bible verse that reads, “Jesus replied, ‘You do not realize now what I am doing, but later you will understand.'”

Stark beat his groupmates Giovanni Tadiotto (Illinois) and Jovan Rebula (Auburn) by four and 17 strokes, respectively (Rebula had a nightmare scenario on the eighth hole that saw him card a 14 on the par 4).

There were a few times along the back nine where Tadiotto and Rebula would hit with irons off the tee box while Stark pulled out his driver.

“I feel like gives me an advantage if anything,” Stark said. “I always hit driver out here in spots that most people don’t. Driving is probably the best part of my game, and I feel like this place is why I separate from many people because I’m able to push it up there where people aren’t into some fairly tight areas.”