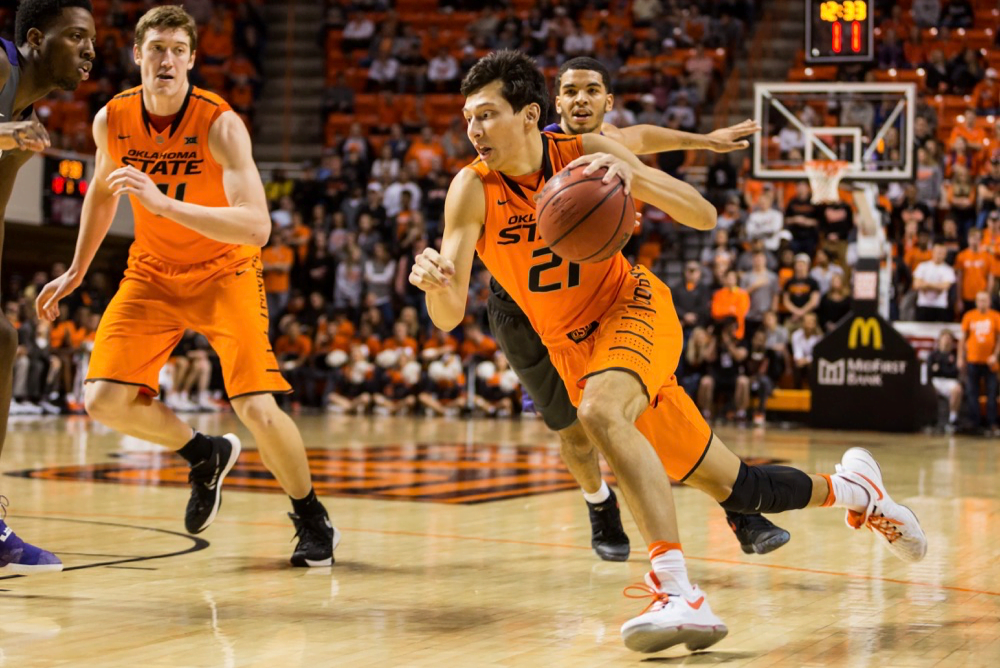 With 3:08 left against the then-seventh best team in the nation, Lindy Waters spotted up. Five days and about a minute and a half earlier, he did the same thing against his hometown Sooners.

Waters suffered a concussion in practice before the Oklahoma State men’s basketball team traveled to Texas in January. He was out for three games, and the Cowboys went winless while he was gone.

But since his return against Kansas in Lawrence, OSU is 5-2. Waters has provided a sharpshooting presence outside the 3-point line, and because of his major buckets in the Cowboys’ past two games, he earned Big 12 Newcomer of the Week.

Waters didn’t seem to care too much about the last part.

“Feels good, but at the same time, you gotta stay humble,” Waters said with a shrug. “You got six weeks left in the season. It’s always good for personal achievements, but right now, it’s all about the team.”

Through Bedlam and OSU’s signature victory against the Mountaineers, coach Brad Underwood said he has picked up on one of Waters’ key traits:

Waters’ duel daggers plus a clincher with 15 seconds left in a tie game on the road against Tulsa earlier this season, have made that clear, Underwood said.

His teammates are the reason the freshman is cool under pressure, Waters said. They give him confidence to shoot it.

“They allow me to just go out there and have a blank mind,” he said. “I’ve just been in the gym, just trusting my shot.”

He put it best: Blank mind. Not once in Waters’ interview with the media Monday, did he smile or laugh or frown or anything — just a blank mind, and it starts with Underwood, he said.

“He lets us just be basketball players, and I guess that’s what I’m better at,” Waters said. “… I’m just having fun, not worrying about anything else, just staying in the moment, just relying on my teammates to create open shots for me.”

He’s cool. Not a lot gets to him, clearly.

There are a couple of things that get his blood pressure higher than a Tibetan monk.

“When I get a text from coach saying, ‘Come talk to me,'” Waters said. “Or when my mom calls me out of the blue. You never know what’s gonna happen.”

Waters missed a significant chunk of the beginning of Big 12 play, suffering the concussion only one game in after the Cowboys lost to West Virginia at home. It was a big setback for somebody who started in 12 of the first 13 games. Still, he averages almost 18 minutes a game, and he has played against the likes of North Carolina, Maryland and Kansas.

Underwood said he has had enough experience.

He’s come a long way in a short time, too. Playing in this conference will do that to you. He’s not really a freshman anymore. In the conference opener against West Virginia, sophomore Davon Dillard saw understandable nervousness out of Waters, he said.

“You could tell he just didn’t know what was going on,” Dillard said. “He didn’t expect it.”

Dillard said everyone was in a frenzy during the Cowboys’ 0-6 start.

“We were like, ‘Man, we’re going down,'” Dillard said. “We started the season off so hot, and so everybody expected us to come into the Big 12 really hot. I feel like we just kinda panicked, and we just kinda fell into a slump.

“Now, I feel like the freshmen have got a lot more experience. Playing in the Big 12, every night is gonna be like a dog fight. Now, we’re a lot calmer.”

Dillard started to reflect on Waters. His shoulders sunk, and his head rolled still in disbelief.

Along with Waters, whom Underwood called OSU’s most versatile guy, freshmen Brandon Averette and Cameron McGriff have stepped in and shown flashes of excellence. Especially recently on the Cowboys’ five-game win streak which has Underwood happy.

“The future’s bright with those freshmen,” Underwood said. “I’m excited to see them growing up and making plays.”