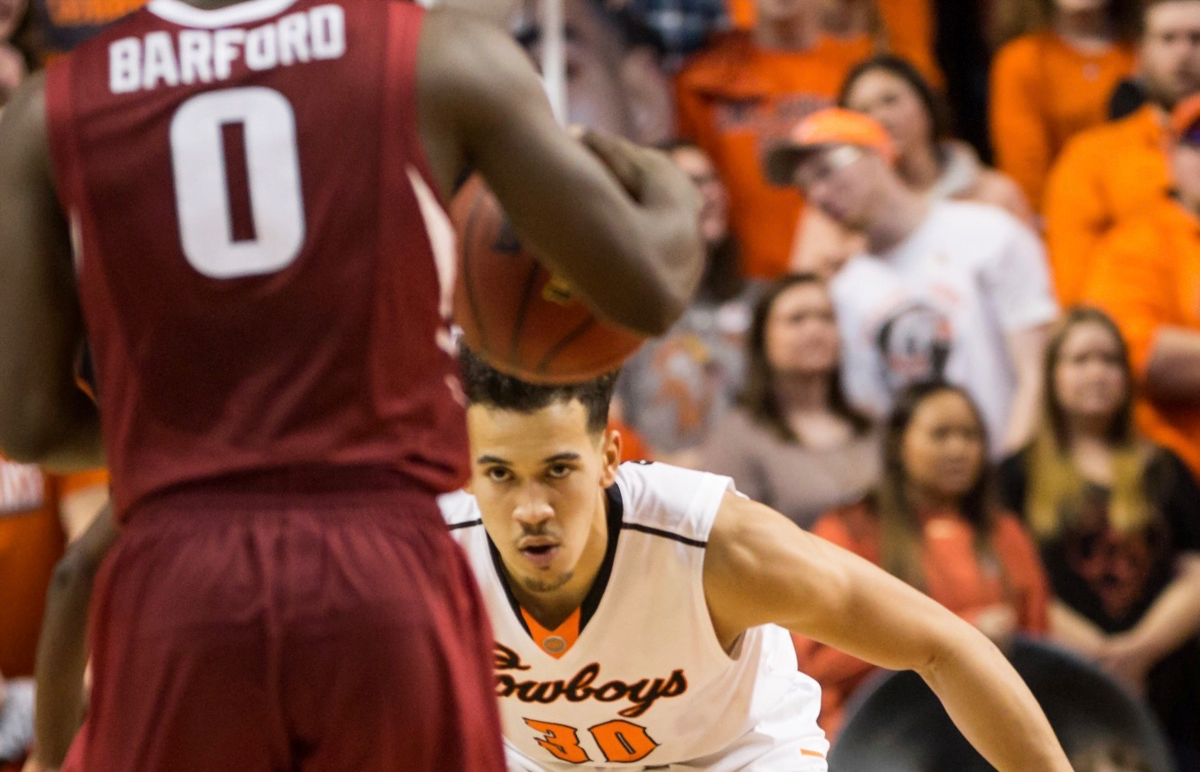 During its six-game losing streak to begin conference play, Oklahoma State was in a defensive rut. The team was giving up 86 points per game, and the defense often broke down in the final minutes of play.

Now, during the Cowboys’ four-game winning streak, that average has dropped to 69. The defense is playing worlds better and the Cowboys are fresh off their first win in Norman in a long time. It’s clear that Underwood made a change in his defensive philosophy, but what exactly was it?

Here’s what color commentator and former coach Fran Fraschilla had to say about Underwood’s change during the Oklahoma broadcast on Monday:

“Watch the defense, Bob,” said Fraschilla. “You see how they’re packed in, they’re not out denying? All five orange jerseys in the lane. That adjustment has turned around Oklahoma State’s season.”

Fraschilla is dead on. Underwood’s simple defensive adjustment has all but changed the Cowboys’ defensive effectiveness.

Early in conference play, the Cowboys did a poor job defending the paint. They would often give up easy baskets underneath:

And there was no help defense, even in mismatch situations:

The issue was that players were left on islands. They were constantly trying to deny their defender from getting the ball (an Underwood staple traditionally), which left defenders susceptible to backdoor cuts or one-on-one drives.

Now, Underwood backed off the denial-heavy philosophy and sagged all his players inside. The strategy is to limit points in the paint and force the offense to have to take contested shots inside.

If they kick it out to the perimeter, the defense immediately closes out not he shooter, not only contesting a possible shot but cutting off any ball rotations or drives. Notice all five defenders are constantly looking back to the ball. They constantly adjust to the strength of the court (the strong side is where the ball is) and, while they’re allowing the catch, they’re denying any potential drive or pass afterward.

By putting a focus on the paint, all two-pointers are contested. Gone are the possessions of easy layups and backdoor cuts.

Additionally, because of the congestion, anyone who enters the paint immediately has a hard time either scoring or passing the ball to the perimeter.

This philosophy is not perfect, as it occasionally leaves the defense susceptible to three pointers if they don’t close out quickly. But most three pointers will still be contested off the first catch, and any subsequent passes allow the defense to readjust to the ball.

All in all, it’s a solid strategy that forces the defense to play out of their element.

At Stephen F. Austin, Underwood prided himself in a successful pressure-heavy scheme defense. Here, he was forced to make a change.

“I changed the pickup point,” Underwood said after the Texas Tech game. “I’ve always been a very heavy-based denial team – not letting teams run their stuff and forcing them to do things that they don’t want to do. We got away from that a little bit. We backed off and got more into the gaps.”

It’s one thing to successfully devise and execute a scheme. It’s another to be able to scrap it and reinvent it (that’s why coaches like Chip Kelly have faded). Good coaches innovate; great coaches are willing to adapt. Brad Underwood, if you didn’t know it already, is a great coach.