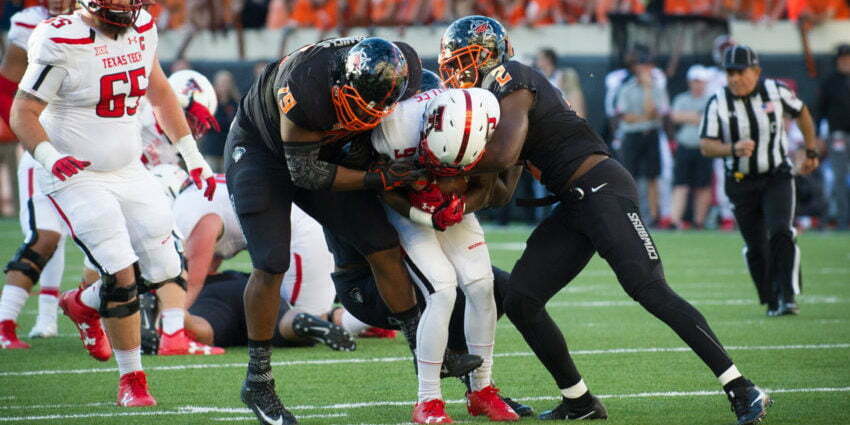 The Oklahoma State Cowboys used a different defense in their 45-44 shootout against Texas Tech this past Saturday. The game plan was good at times, and defensive coordinator Glenn Spencer shouldn’t receive all the blame for giving up 3.38 points per drive.

The scheme had its flaws, but at the end of the day, it always comes down to execution. In this game, the Cowboys didn’t execute as well as they could have. OSU has made the change from a base nickel defense to a 3-3-5 set. Now instead of four defensive lineman and four in the secondary they have three lineman and five in the secondary.

The base coverages in OSU’s new defense are the Cover three.

The number refers to the amount of deep safeties (two=two deep, three=three deep, etc.) with the rest of the defenders with hook-to-curl or flat responsibilities. OSU also does some cover six (one half and two quarters deep) and they occasionally mix it up by bluffing pressure or calling a zone blitz.

They use the 3-3-5 to allow short passes and protect against the deep ball, and that’s fine. With this philosophy’s pros, though, comes just as many cons. It’s fine to go cover three or four, but when a team does it practically every down with the secondary (especially the safeties) playing way off, it open up holes in the zone.

And Texas Tech took advantage of that.

They constantly picked apart the deep hole between the flat and the safety on the sidelines (they ran this play plenty of other times, too):

The spot between the corner and the linebacker:

And they frequently used RPOs (run-pass options) or quick passes to throw to the receivers who were left uncovered pre-snap (wait, didn’t we talk about this?).

Don’t blame this all on Spencer & Co. If you think about it, the scheme makes sense, and the color commentator on FS1 even mentioned that it was the exact same game plan that Texas and TCU used against Texas Tech.

The issue is that in order to pull it off (and not give up the big play), a defense has to play excellent zone coverage and they have to tackle well in space.

Unfortunately, they still gave up the big play because they failed to play excellent zone coverage:

And failed to tackle in space:

Although OSU gave up points, head coach Mike Gundy was pleased with the new scheme and its ability to slow down Mahomes & Co.

“The risk of making a wholesale swap … is whether you can make your adjustments,” said Gundy. “… There were times that we needed to make adjustments that were more difficult to make just based on not knowing exactly the ins and outs of the system, but I thought it was a good move. They had 510 yards or so, 96 plays, and when you look at it, they were 4.8 yards a snap, something like that [actually 5.4] …and we were nine-and-a-half yards a snap. So to me it worked.”

The defense did find ways to slow down the Red Raiders, and Mahomes made a number of improbable plays to keep the chains moving in key situations. The scheme needs work, but you can’t judge it on just one game.

They used the 3-3-5 against West Virginia, and it worked pretty well. Plus, against a team that spreads it out five wide as much as TTU does, offensive numbers will always receive a boost. Finally, OSU’s defense at its core, as in the actual players, just isn’t as good as many had hoped, so while a coaching staff can scheme and strategize, but sometimes giving up plays are inevitable. You can put lipstick on a pig, but it’s still a pig.

The Cowboys now look to their game against a very similar offense in TCU’s. Let’s hope that they’re able to use this week to work out the kinks.

How do you think the defense performed against Texas Tech? Leave your opinions below in the comments!