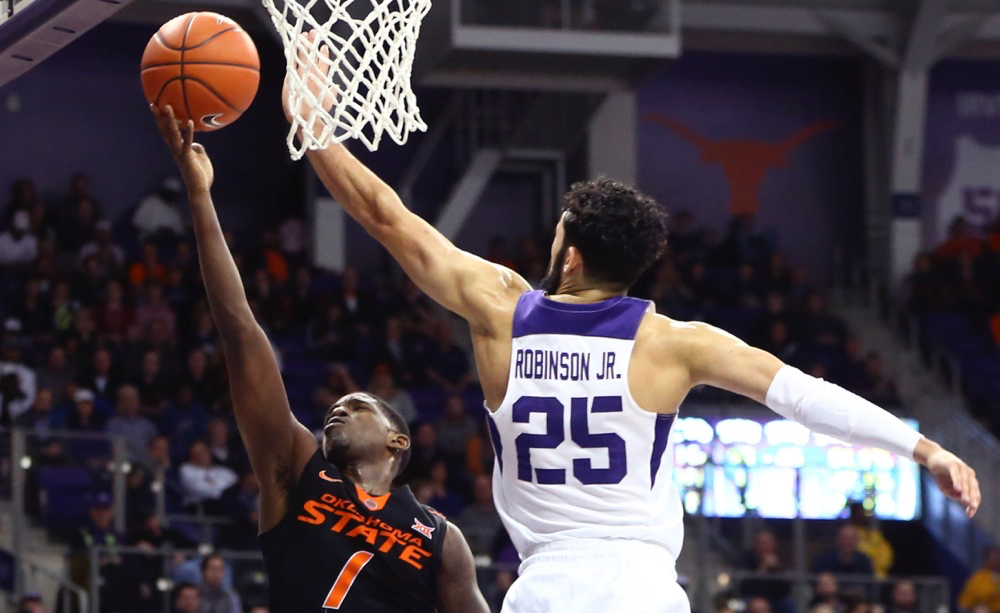 FORT WORTH, Texas — Jawun Evans rode out of Fort Worth on Wednesday night with an extra-large sausage pizza in his hands, hood over his head and Nike flip flops swinging from his feet.

He didn’t exactly have the look of an assassin who had just delivered a death blow to a suddenly-reeling TCU squad as he walked quietly down the big ramp at TCU’s stadium towards the Oklahoma State bus.

But he was. And he did. Evans double crossed poor Alex Robinson and hit a stepback that poor Jamie Dixon will not be able to unsee.

Evans had 16 points, 4 rebounds and a career-high 12 assists on Wednesday as OSU took down TCU 71-68 in a thrilling game that featured a 6-0 flurry by the Pokes to end the festivities.

Evans took eight of Oklahoma State’s last 14 shots, made five of them and hopped up and down on the TCU logo afterwards as his head coach thrust a double-pump punch towards a delirious OSU bench.

It was a punctuation mark on an evening marked by offensive showmanship.

The Cowboys have now won seven of eight, and Evans has proven himself a worthy closer both on this Wednesday night and over the last handful of wins.

The default to Evans isolation can be worrisome at times for Poke fans when games get nippy late. We’ve seen that movie before. But Brad Underwood said it’s not an accident.

“We do it on purpose,” said Underwood. “Most of it is based on what the defense is giving us at the time and who’s going. They switch ball screens. We’ve got a little action we run where we slip two bigs … and Jawun is going to beat his guy most of the time.

“When you’ve got one of the best guards in the country, we’re going to ride with that — 12 assists shows he’s not a selfish player. He’s going to make the right decision most of the time.”

Evans showed all of his cards on Wednesday as he dished dimes that would have made Mason Rudolph and Jalen McCleskey weak. His game was on a string on Wednesday. It felt, at times, like he was toying with the fans. Like he was playing a different sport than the guys trying to defend him.

In person, he has a sixth gear that nobody else on the floor has. He was abusive to TCU’s big men and dismissive of its guards.

Evans found Leyton Hammonds early as No. 23 scored a season-high 21 points. He whipped passes to Jeffery Carroll (17 points) in transition that made no sense. He looked off TCU bigs like they were safeties and led his team to easy layups (OSU shot 51 percent from the field and had 38 points in the paint).

Then when the chips were down and the game felt like it was tightening around Underwood and Co., they looked to No. 1. He closed like a star should close. He never looked rattled. He never got out of control. He just did Jawun stuff over and over again.

He flew by dudes and got easy layups. When he didn’t have the bucket, he even found Mitchell Solomon for two as time wound down on a must-have game for the Pokes.

They were. No. 1 most of all. And this is the brilliance of Evans. He blew the game open offensively in the first half and took it back late. The iso ball might not be the most palatable taste in the mouths of Oklahoma State basketball fans, but its success on Wednesday was undeniable. And when Evans is really rolling, he seems nearly impossible to stop.