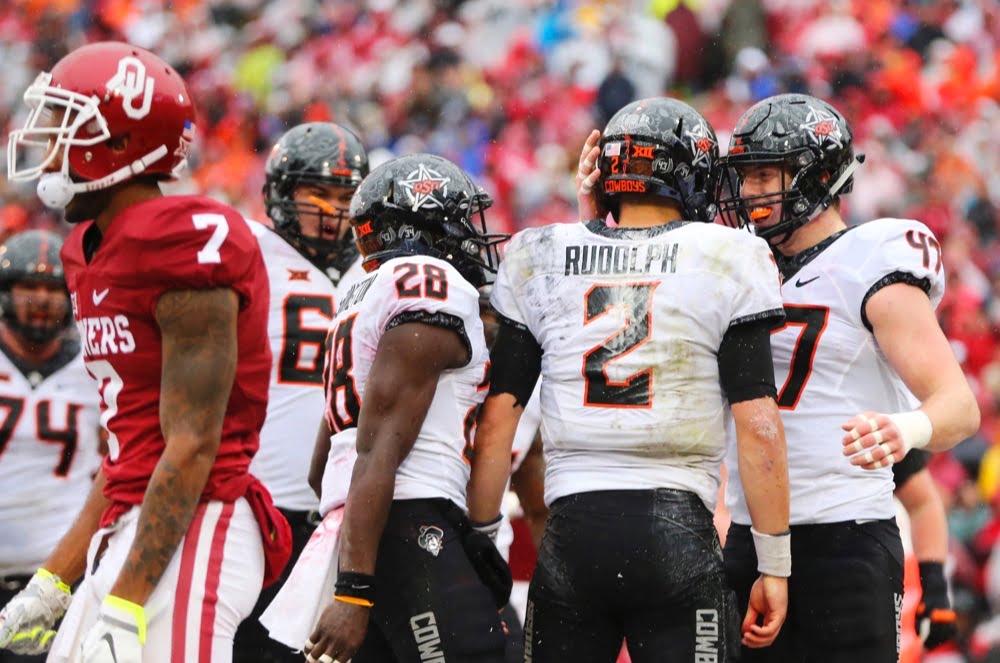 I recently collected data on recruiting rankings going all the way back to 2005, Mike Gundy’s first year in Stillwater. We rolled out a few interesting things I found and think about what OSU’s position in the recruiting world will be going forward. Hope you’ve enjoyed them. This will (probably) be the last piece.

Let’s be clear about something — Mike Gundy is succeeding at Oklahoma State. That is undeniable. I am 100 percent in the Mike Gundy camp when it comes to college football coaching. In fact, I think he’s probably underrated by a majority of Oklahoma State fans. He’s an amazing coach. The Eddie Sutton of OSU football. On the Mount Rushmore of OSU sports.

OSU has been awesome since he took over. I mean awesome.

Better than Notre Dame, Michigan, Nebraska, South Carolina, Texas A&M, Missouri, Arkansas, UCLA and Miami. Here is a look at OSU’s company since 2005 when Gundy was put in charge of OSU’s program. These are the records of schools since 2005, sorted by winning percentage. So my conflict is not with whether OSU is great or Mike Gundy is an awesome coach. Both of those things are empirically and statistically true. My conflict is this: Can OSU be even better than it has been? Can it recruit better and win more and become a national powerhouse? Can it fill the void Texas has left on a national level?

Can it …. become Clemson?

Maybe the better question is: Does it even want to?

When we discuss the future, we must always talk about the past. What are your goals? Where are you trying to go? What do you want to do? Each program has different goals of course. It would be silly for North Texas to have the same goals as Alabama. So what are OSU’s? Let’s look at three quotes. All of them are from last season.

“So a long time ago, when we started this, my goal was to put a quality team on the field so that people that loved Oklahoma State football knew every Saturday we had a chance to win.”  -Mike Gundy

“Our goal each year is to get our team prepared so that when we step on the field the fans can be proud of the product that’s on the field. We’re going to play hard, we’re going to do it respectfully. It’s extremely difficult to predict wins and losses or to see how the game is going to go — any game. But our goal is to win a conference championship. We have always felt like if we can win the conference championship that would allow us an opportunity to get to the playoff.” -Mike Gundy

It is clear from these three quotes that OSU’s goals have shifted over the years. From simply putting a quality product on the field back in 2005 to winning conference championships in 2017.

Spencer and Gundy both said it. There is one more step left in the evolution of a team, though, and that is to get where OU is. Where your goal is to win a national championship and a Big 12 title is just a signpost on that road.

The problem? I’m not sure how you can get to space with the way things currently stand.

We already looked at how recruiting wins national championships. Then we looked at how OSU isn’t necessarily interested in becoming an elite recruiting school. So it seems the program is at a crossroads here. Can you really become Clemson without recruiting like Clemson?

I asked four national writers (both CFB and CFB recruiting) for their take on this. On how OSU can move incrementally to become elite at recruiting (like the teams in the graphic we looked at here). This is what they said.

Travis Haney (247 Sports): I’ll be honest and say I’m not sure that Oklahoma State can consistently move into that category, mostly based on geography. Isolation is such a difficult thing to overcome — largely because it’s that much harder to get recruits on campus for unofficial visits.

None of the hot Texas prospects just happen to be stopping through Stillwater is my guess. That’s not to say a dynamic staff cannot make some headway and land some higher-end targets, but I believe OSU is one of those schools that’s going to have to lean on identification and development – and some JuCos — to balance out that gap.

And I’d say Gundy’s staffs have done a really nice job of that. I’m kicking around doing a story on him as the most underrated coach in the country relative to consistency and resources. So maybe this is just what the program is in terms of recruiting, unless you move it three or four hours south. It isn’t a death sentence, but it’s certainly a hurdle.

Jake Trotter (ESPN): I mean, can you? How many programs have crossed that threshold over the last two decades? Oregon? Texas A&M sort of? The “big boy” programs you reference have won national titles and/or exist in incredibly fertile recruiting grounds like the states of Texas or Florida. It is almost impossible to go from a good recruiting program to an elite one.

Greg Powers (Scout): Rankings classes are valued by determining quality and quantity. It is very interesting that you use the No. 14 nationally as the spot that would be ideal for a program like Oklahoma State to rise (ed. note: I asked how you move from No. 34 to, say, No. 14 in an email to Greg), because the last time it took a full allotment of recruits was in the class of 2014 (28) and it actually finished at No. 14 nationally in the Scout rankings.

Since that time the highest number of recruits it has signed is 22 (2017). Over the past three classes it has signed over 34 percent of its talent from the JuCo ranks, and JuCo prospects are not valued as highly as high school prospects in the team recruiting rankings formulas. We view OSU and TCU as two of the best talent evaluating staffs in the conference and it is that ability to identify and secure that type of solid talent that has made those two programs competitive within the conference.

Woody Womack (Rivals): Make the leap from good to great in recruiting is always tough for programs like Oklahoma State. It takes a combination of consistent on-field success as well as pipeline to elite talent. I think if the Cowboys were to make a few runs to the college football playoff they could parlay it into more consistently ranked classes in recruiting.

There are loads of interesting nuggets, but the one about JuCo players and OSU not fully filling out its classes in a given year is maybe the most intriguing to me. Gundy is, pretty undeniably by these writers, one of the best at evaluating the right kids and building a successful culture with them.

But Oklahoma State still has a long way to go as a program. We would all love to see the Cowboys string together a run of three Big 12 titles in five years or four in nine years. Something like that. OSU is closer than ever to joining a crop of nationally-relevant schools that contend at the very highest level every year. So close. You can almost taste the milk and the honey of that sweet terrain.

OSU has built itself (with Mike Gundy as the chief architect) into a tremendous college football program. One that is worth being proud of and following and enjoying. And don’t misunderstand me here. Things are great right now. These really are the golden years of Oklahoma State football. I’m fine with winning a Big 12 title every five or six years. The yearly product is incredible. I’m not complaining.

But success breeds the desire for more success, and opportunities to break into that circle of prosperity that reboots itself year after year don’t come around that often for schools like Oklahoma State. The opportunity to become OU is right there. And despite what you think about OU, that is a program anybody should want to become (on the field anyway).

I realize that this takes time. That you don’t build Bama overnight (unless your name is Nick and you wear a straw hat to two-a-days). I realize it could take two decades or maybe three. Or maybe it’s impossible. I don’t know. What I do know is that OSU is inches away from breaking through and winning multiple conference titles and playing for national titles like the other schools we’ve talked about.

And yet it still sometimes feels like they’re so far away.