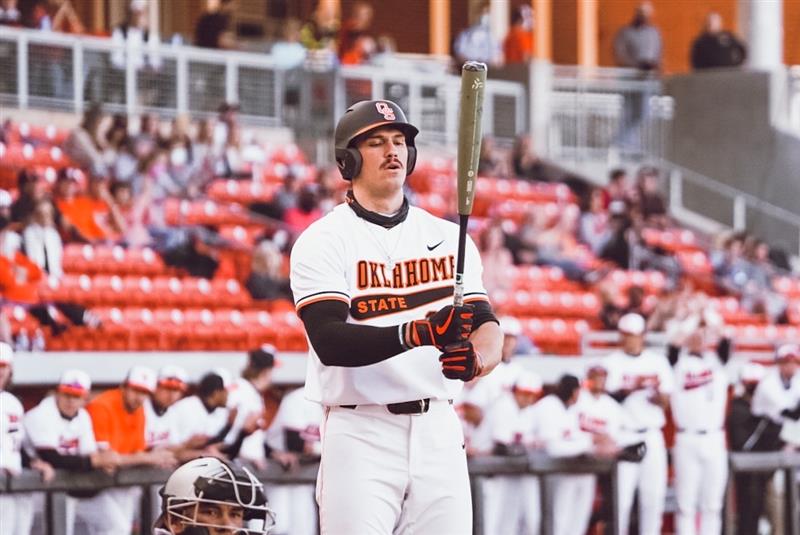 Losing streak, no more. The Cowboys are back in the win column.

Oklahoma State beat Kansas State 14-5 on Friday night in O’Brate Stadium. The victory busted the Cowboys’ three-game skid. They lost six of their past eight entering Friday, though four of those losses came against top 10 teams.

The No. 13 Cowboys put up seven runs in the seventh inning, four of which came before an out was recorded in the inning. Only five of the Cowboys’ seventh-inning runs were earned, as K-State committed two errors in the frame.

Parker Scott (5-1) dealt for seven innings on the bump before having a rough eighth. He threw 124 pitches, his longest outing of the season, where he gave up five runs on eight hits while walking one and striking out eight.

Christian Encarnacion-Strand retook his team lead in home runs in the eight when he hit his seventh of the year, and it was a beauty.

He watched it the whole way from home plate, and the ump gave him a little talking two when he returned from his trot around the bases.

Encarnacion-Strand finished the day 3-for-4 with two RBIs and four runs scored.

Max Hewitt also had a big day at the dish, going 3-for-5 with four RBIs and a run scored.

The 14 runs are the most the Cowboys have recorded this season.

It had been 380 days since Carson McCusker last suited up for an OSU baseball game, but he returned Friday night

McCusker, the Cowboys’ fifth-year senior left fielder, missed OSU’s first 19 games of the season with a back injury.

It was a solid return for the towering, 6-foot-8 Nevadan, as he went 2-for-4 at the dish with a putout in left.

“When you see Carson McCusker stand in the batter’s box, it just looks different, doesn’t it?” OSU coach Josh Holliday said. “That’s a large man, 6-foot-8, 240-pound specimen playing baseball. There’s not many of them. He’s a big man. You just see how talented he is. He hadn’t seen a live-pitch baseball until (Thursday), and then he plays today.”

McCusker was a senior last year when the pandemic shut down the Cowboys’ season just 18 games in. McCusker took the opportunity to return for a fifth year.

He has come up big for the Pokes at different times in his career. He hit a home run against Nebraska in the Oklahoma City Regional in 2019 to start a rally that ended with Trevor Boone’s all-time electric home run.

Freshman Nolan McLean has proven early in his collegiate career why he was so highly touted a prospect.

After spending the fall as a depth quarterback for Mike Gundy’s football team, McLean has seamlessly transitioned back into baseball.

He hit his sixth home run of the year Friday, tying for the team lead before Encarnacion-Strand regained his lead in the eighth.

He didn’t play in OSU’s first game of the year, but he has since started six games at designated hitter, 10 games at second base, a game a first base and two games in right field. Holliday said there isn’t a position he is uncomfortable putting McLean.

“He’s a very mentally strong individual,” Holliday said. “He has great standards for himself. He expects to do well. He plays for his team, first and foremost. He’s remarkably coachable, which I can’t tell you how unique it is to come across a fine, young athlete that’s very gifted but so coachable. He seeks information, he trusts people. He’s just a really unique player. He’s got incredible strength.

“One of the things you guys haven’t gotten to see him do is pitch. He’s a remarkably good pitcher, so when we can get his arm kinda conditioned for that, we’ll use him in that capacity.”

Depth in the Outfield

The Cowboys are at least six-deep in the outfield this year.

Add McCusker to the list of Caeden Trenkle, Cade Cabbiness, Noah Sifrit, Jake Thompson and Dom Johnson as guys who could start out there for Holliday.

It’s a good problem to have that Holliday has so many options, and each guy brings a little something different.

“You match guys up, try to keep guys healthy, try to take advantage of all the talents kids posses, put them in a game in a time they can help us win,” Holliday said. “The day we have too many good players will be the day we’ve won every single game every single time we play. We’ll just keep pushing and playing like a team.”