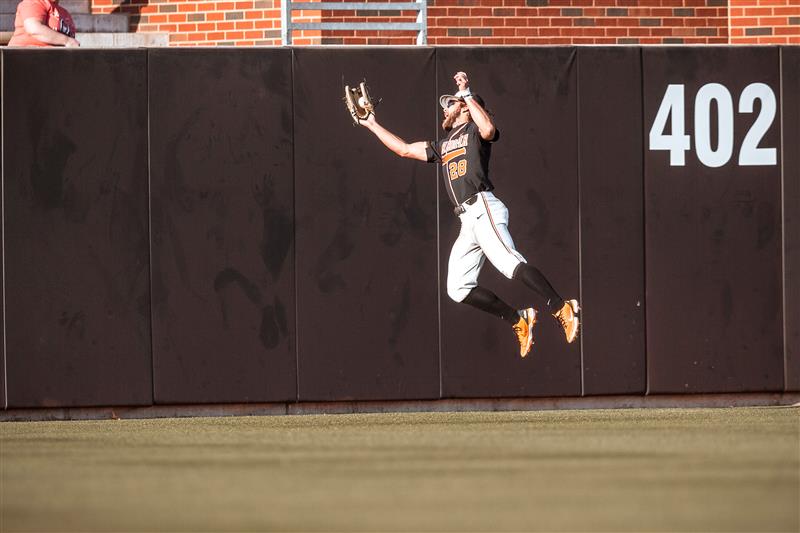 STILLWATER — The Cowboys dropped a tightly contested doubleheader to a Texas squad that has won 16 in a row.

In Game 1, Texas jumped out to a 4-0 lead in the third inning, and the Cowboys nearly came all the way back in the sixth.

Max Hewitt got the rally started with a triple before Jake Thompson brought him home with a two-out double. Carson McCusker then traded places with Thompson with a double before Cabbiness brought McCusker home with a single aided by a throwing error.

That cut the Longhorns’ lead to 4-3, but the Cowboys couldn’t crack into it any further, stranding four runners in the final three innings.

A few pitches made the difference in Game 2, as all five of Texas’ runs came off three home runs.

OSU Is Good, Not Great — For Now

The Cowboys have played four ranked teams this season — No. 2 Vanderbilt, No. 5 Texas Tech, No. 8 TCU and No. 3 Texas. All in the Top 8, coincidentally the number of teams that make up the College World Series.

Against that batch of college baseball’s elite, OSU is 2-9. Against every other team the Pokes have played this year, they are 21-3-1. There aren’t many blurred lines there. The Cowboys are definitively better than the Kansas States and UNC-Wilmingtons of the world, but definitively worse than that upper echelon.

Of those nine losses against Top 8 teams, four have were separated by one run.

It isn’t a horrible spot for the Cowboys to be considering they started two freshmen pitchers in Saturday’s doubleheader, but there is a proverbial hump the Pokes need to conquer to get to that Omaha level.

“When things are going like this, this is when you need to be the most positive and the most forward-thinking. That’s what we’re going to be here. We’re going to control what we can control. We know what we can get better at. We need to be a pitch better here, pitch better there. That’s our standard. That’s our standard as a program. We expect to win. We’re gonna do it. We’re gonna do it.”

Parker Scott, Justin Wrobleski Out for the Weekend, at Least

Cowboy ace Parker Scott was absent from this weekend’s activities with an abdominal injury, and after Saturday’s games Josh Holliday said the Justin Wrobleski, the Cowboys’ Sunday starter, would also miss this weekend.

On Saturday night, Holliday said he wasn’t sure who would start Sunday’s game.

“We’ll figure that out as soon as I get done talking to you guys down the coaches’ locker room and get a game plan ready for tomorrow,” Holliday said. “We’re a little shorthanded, so we’ll have to kind of think our way through it now that we saw how these first two games played out.”