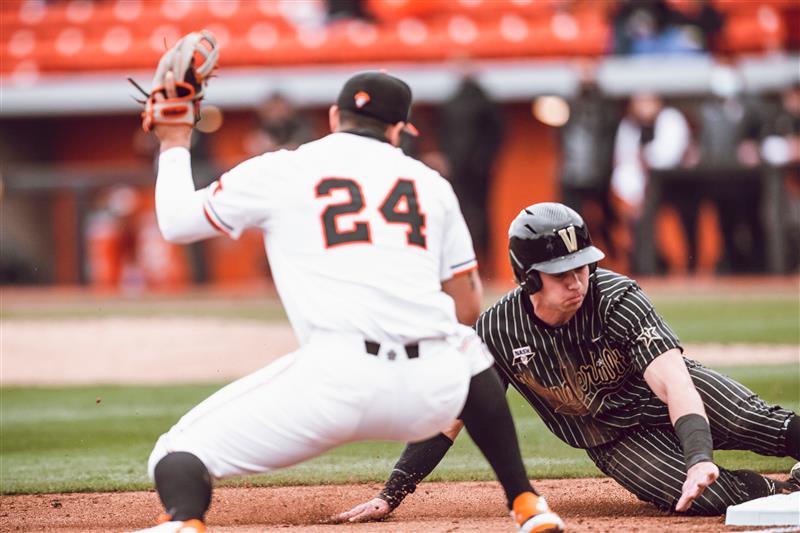 The eyes of the Cowboy faithful are mostly on Kansas City as the Oklahoma State basketball team plays for a Big 12 Tournament title Saturday night, but the OSU baseball team started a Top-10 series in Stillwater.

The Cowboys dropped their series opener against Vanderbilt 5-0 on Saturday afternoon. The game was postponed from Friday, and the No. 9 Cowboys and No. 2 Commodores will go again at 6 p.m. Saturday night.

It was the Cowboys’ first loss of the season.

The Cowboys faced the projected No. 1 pick in the 2021 MLB Draft, and Kumar Rocker showed just why he is so highly thought of.

Rocker threw eight innings against the Cowboys were he allowed no runs on two hits while walking one and striking out nine. It was Rocker’s longest outing of the season thus far.

Rocker is massive on the mound at 6-foot-5, 245 pounds. His fastball hit 101 mph and some of his breaking balls were in the 90s. He is all around terrifying. He grunts as he throws, and if he has a bad pitch, he’ll yell and expiative. It was intimidating stuff.

He has now thrown 23 innings on the season and has allowed eight hits and given up just a single run to Illinois-Chicago.

Max Hewitt and Brock Mathis got the Cowboys’ hits against the future millionaire.