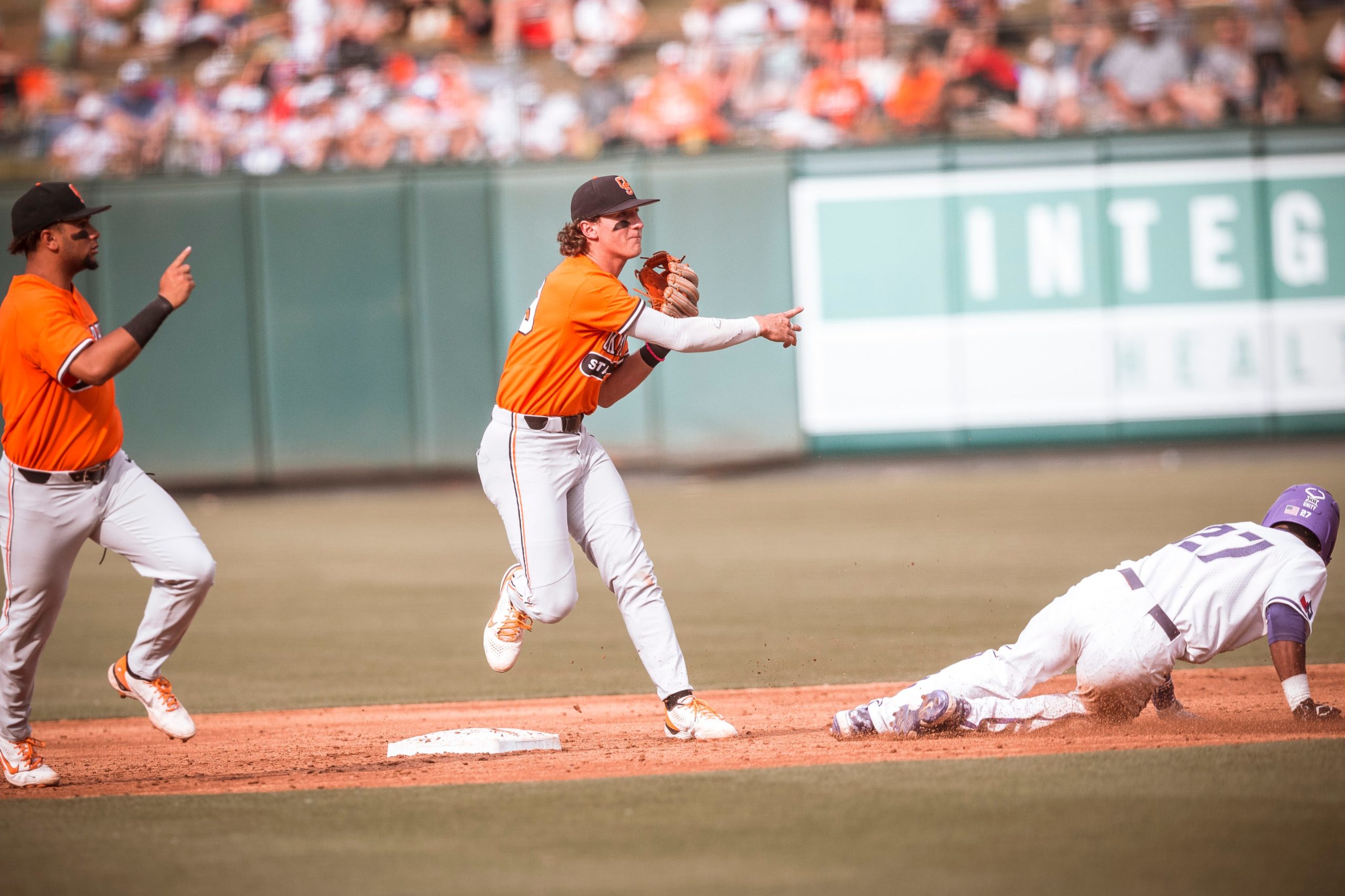 A perfect storm in the desert caused Oklahoma State to fall 14-4 to U.C.-Santa Barbara, and to 0-1 in the Tucson Regional.

An All-Big 12 first-team pitcher didn’t have his stuff, and the Cowboys’ bats looked cold in the sweltering heat. Add in some unforced errors and a pinch of bad luck and the Pokes had no chance against a fantastic performance by UCSB.

OSU may have struggled from the mound and from the dish, but the Pokes were able to keep a lid on it early.

Each team scored in the first inning, and the Cowboys were able to keep it knotted up at 1 until it all unraveled in the fourth.

The Gauchos’ first run came on a safety squeeze that was originally called out. There were three reviews and two of them went UCSB’s way.

Jake Thompson sent the Cowboys’ first pitch in the fourth 405-plus feet and over the centerfield wall to bring the Pokes back to within 3-2.

He was one of the few bright spots in orange, going 2-for-3 with a home run, an RBI single and nine putouts on defense.

The Cowboys tried to get something going in the sixth when a single, a hit batter and a walk loaded the bases with no outs. But the Pokes only mustered one run and stranded two.

Things got worse for the Pokes’ defense in the fifth, starting with a single and a hit-by-pitch to put Gauchos on first and second. Jason Willow’s sac fly pushed the lead to 4-2, and an error on the throw to third advanced another runner to third. He would cross the dish on another sac fly.

After those two runs in the fifth, the Gauchos poured on three more in the sixth to build an 8-2 lead that would prove insurmountable.

Justin Campbell had a tough day from the mound. The Pokes’ ace came in with a 2.08 ERA on the year but allowed 10 hits and walked three batters and hit two more Friday.

Campbell threw a no-hitter earlier this season against Kansas and had given up just eight runs in his last five starts. On Friday, he gave up eight in six innings. Seven of those came during three consecutive trips to the mound.

UCSB’s Rodney Boone, on the other hand, was able to ice the Cowboys’ bats despite the triple-digit temps. He allowed seven hits and four runs while striking out 11 in seven and one-third innings.

Injury, meet insult. OSU was down 9-4 in the top of the ninth. UCSB added five more runs in the ninth to go up by 10.

This marks the Cowboys’ second-worst loss of the season and second-most scores allowed behind the 18-4 defeat to Vanderbilt back on March 13.

With the loss, the Cowboys face elimination Saturday at 3 p.m. CT against the loser of Friday night’s tilt between Arizona and Grand Canyon. OSU went 2-0-1 against Grand Canyon this season.