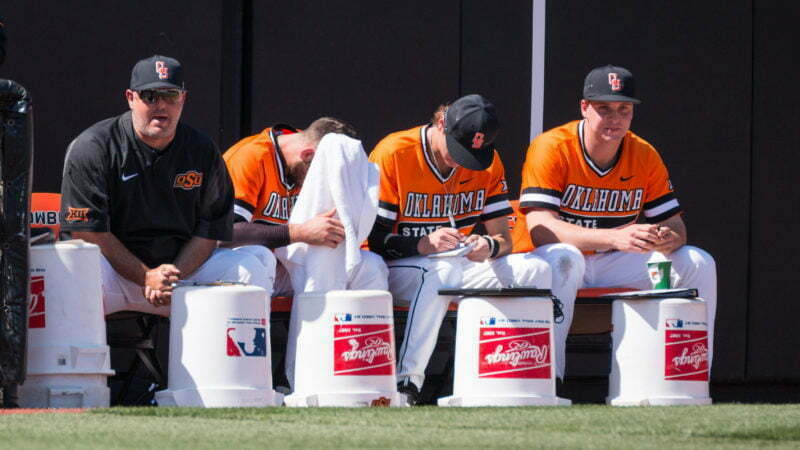 The Cowboys’ season has not gone as planned. That’s an understatement. One of the final four teams to play in Omaha during last year’s College World Series is in real danger of missing their conference tournament.

Oklahoma State’s Bedlam series with an Oklahoma team who’s trended in the opposite direction this year has now been rescheduled twice due to some seasonably severe Oklahoma weather.

To beat out perennial bottom feeder Kansas State for the eighth spot in the Big 12 Tournament, OSU needed some combination of their own wins and Kansas State losses to add up to three. Now, after the Wildcats took two of three from Baylor (they lost on Thursday and took two on Friday night in Waco), the Cowboys have to win two games against the No. 21 Sooners to make the tournament.

Oklahoma State held a 5-2 lead in the 5th inning of Game 1 on Friday before rain stopped the game. Rain and lightning never let up enough to resume and now Game 1 is scheduled to continue at 4:35 pm on Saturday and Game 2 will be at 7:05 pm. Game 3 has been canceled.

Game 1 was originally scheduled for Thursday, May 18 in Tulsa but was rescheduled due to weather. Now, after the games in Oklahoma City have suffered the same fate, it was decided to shorten the series which must end on Saturday, May 20 due to NCAA rules requiring a three-day window on a series.

This narrows the margin for error even more the Cowboys. At this point, each game is a must win. Lose either of the two Bedlam games on Saturday and the Cowboys will finish as the last place team in the Big 12 and their season is over.