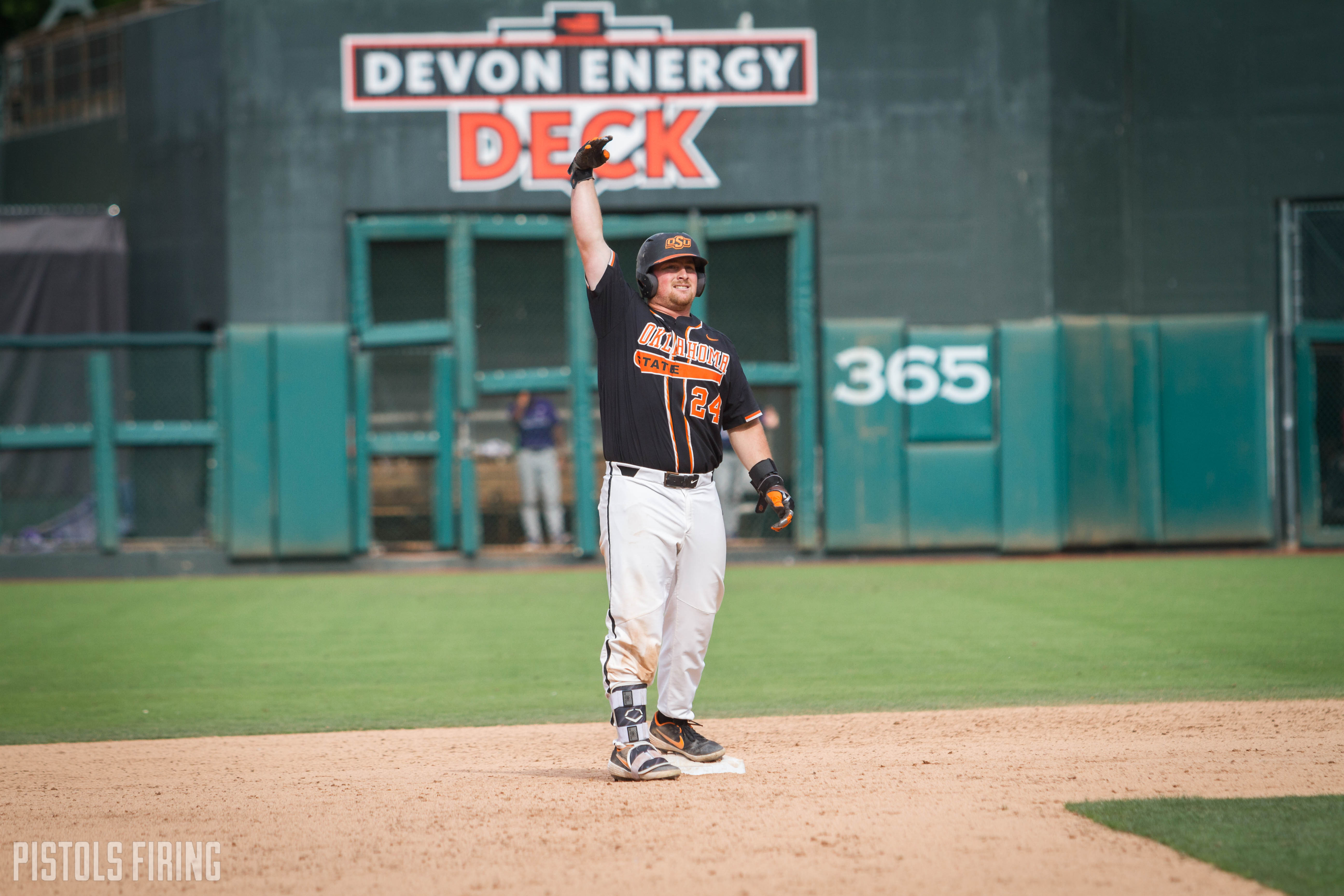 OKLAHOMA CITY — If the Cowboys are to advance to Sunday afternoon’s championship game, they’re going to have to do it on Sunday morning.

The Oklahoma State baseball team fell to TCU 13-6 on Saturday in Bricktown Ballpark. If OSU won, they would’ve automatically advanced to the championship game, but the Pokes now must play TCU again at 9 a.m. on Sunday.

The Cowboys’ comeback attempt all came crumbling down in the final two innings. Before that, OSU was able to level what started as a 6-0 deficit. Cade Cabbiness tied the game in the seventh inning with a grand slam.

The momentum seemed fully on the Pokes’ side, but TCU, a team that probably needs to win the tournament to advance its season past Sunday, paid no mind to momentum.

The Horned Frogs scored five runs in the eighth and added another two in the ninth to live to play another game.

The Cowboys struggled against TCU starter Jared Janczak. Janczak came into the day with a 6.28 ERA, but he is a College World Series veteran. An injury kept Janczak out of much of the 2018 season, but before that, he made four total starts in the CWS in his redshirt freshman and sophomore seasons.

Janczak came into the day with 13 strikeouts this season, but he struck out 12 Cowboys on Saturday. He threw six innings where he allowed two runs on four hits and two walks.

Janczak’s only major oopsie of the day came against Colin Simpson, and Simpson took advantage of it.

With the smash, Simpson has hit home runs in all three of the Cowboys’ games in the Big 12 Tournament this year. He has hit a homer in his past five games and in seven of his past eight games.

“He’s the best power hitter that’s played here in quite some time,” OSU coach Josh Holliday said. “He’s a very special kid. We’ll have a real hard time replacing him the person. Obviously him the player is pretty awesome, but him the person is equal parts a treat to be around.”

The Cowboys’ used seven pitchers in the game. Joe Lienhard got the start but just didn’t have it. He made it only two 2/3 innings where he allowed four runs off six hits. He walked five batters and struck out one. From there, the Cowboys used: C.J. Varela, Noah Sifrit, Mitchell Stone, Ben Leeper, Nate Peterson and John Kelly.

Sifrit was probably the most impressive. He has spent more time in the outfield than on the mound this season, but Sifrit threw two 2/3 shutout innings and didn’t allow a hit.

“I thought Coach (Rob) Walton handled it well,” Holliday said. “We got behind, we had to try to bridge the gap. We tried to use a couple different kids. Noah did the best job of keeping us in it. Mitchell did a nice job, and when we got tied in the eighth inning, we went to our closer (Leeper), hoping to put up a zero so we could come back in the bottom of the eighth and ultimately play for the win.

“Didn’t happen that way. That’s baseball. From there, you gotta get Ben out, knowing you’re gonna need him again.”

The Cowboys have saved Brett Standlee to this point, and overall the Cowboys haven’t used their bullpen members for too many innings. So, it wouldn’t be outrageous to see some of the guys used over the past few days again.

The Big 12 Championship game will be played at 1 p.m. on Sunday, and the winner of the OSU-TCU tilt will get a swing at West Virginia. For the Pokes it would be the third Big 12 Tournament title in team history.