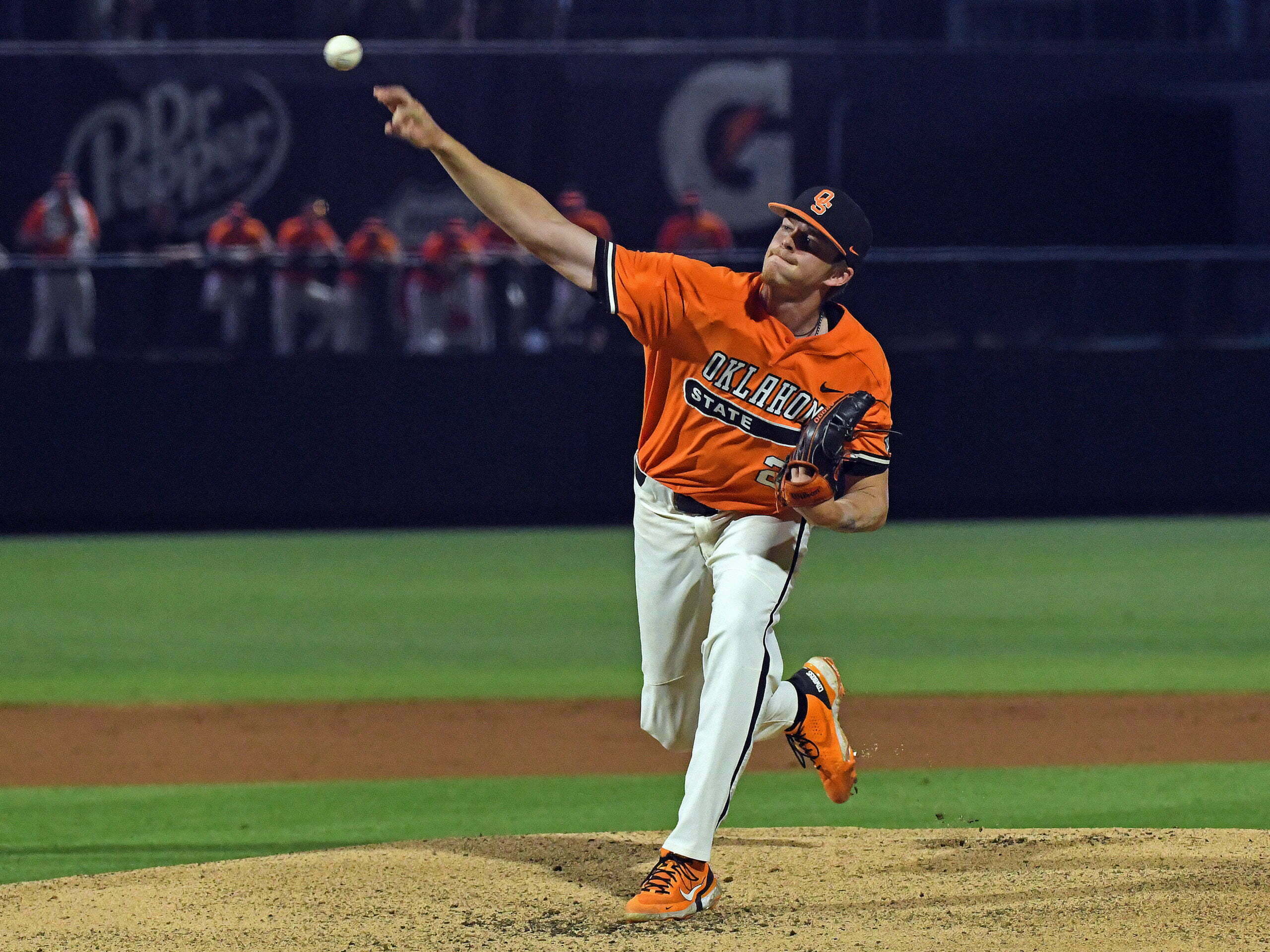 OKLAHOMA CITY — With his head down, Justin Campbell started his deliberate walk to the dugout before the inning’s final out was even recorded.

Oklahoma State topped Oklahoma 9-5 in the first round of the Big 12 tournament Wednesday night (and Thursday morning) in Chickasaw Bricktown Ballpark. Campbell, a freshman pitcher from Simi Valley, California, threw six innings where he didn’t allow a run on just three hits while walking one and striking out seven. He takes intense walks from the mound to the dugout, sometimes coming when a flyball is still in the air for the third out.

“It’s more of what he’s been all year — highly competitive, very skilled, very tough,” OSU coach Josh Holliday said. “He really knows how to make pitches when he needs to get certain hitters in certain situations. I thought he, once again, did a great job. He was fantastic.”

Campbell has the lowest among OSU pitchers with at least nine innings pitched. His first career postseason outing adds to a stellar season that has seen him throw a no-hitter and hit .254 at the plate.

Most of Campbell’s run support Wednesday came in the fifth inning. Christian Encarnacion-Strand started the frame with a double he drilled high off the left-field wall. A walk, a strikeout and a walk loaded the bases for the Pokes, which led to Marcus Brown singling to left to score Encarnacion-Strand, making the game 3-0.

Brock Mathis was the Cowboys’ next batter. He got hit with a pitch, scoring another run. Matt Golda grounded out, but avoided a double-play, allowing another run to score. Caeden Trenkle finished the scoring with an infield single. The Cowboys scored four runs on three hits in the inning.

Brown, another freshman, was used sparingly early in the year but has found his way into the lineup as a designated hitter. He went 3-for-4 Wednesday night with two runs scored and an RBI.

“He’s proving to be a gamer,” Holliday said. “He’s worked his tail off, and he’s been present and available. When he’s gotten his opportunities, he’s really capitalized.”

The game didn’t end until about 12:50 a.m. after the Cowboys were a run away from a run rule in the eighth. Then the Sooners tallied all five of their runs in the ninth against OSU’s bullpen.

The Sooners have less than 12 hours until their loser’s bracket game against Texas.

Morrill Out for Extended Time

The Cowboys could be without their starting shortstop for the remainder of the season, Holliday said.

“Hueston is hurt,” Holliday said. “Hueston won’t be available in this tournament or if all the rest of the year.”

Matt Golda moved to short in Morrill’s stead, going 1-for-3 Wednesday with a fourth-inning home run.

The Cowboys will play West Virginia on Thursday night after the Mountaineers upset top-seeded Texas earlier Wednesday. OSU is 2-1 against WVU on the year, having most recently run-ruled the Mountaineers on April 3.