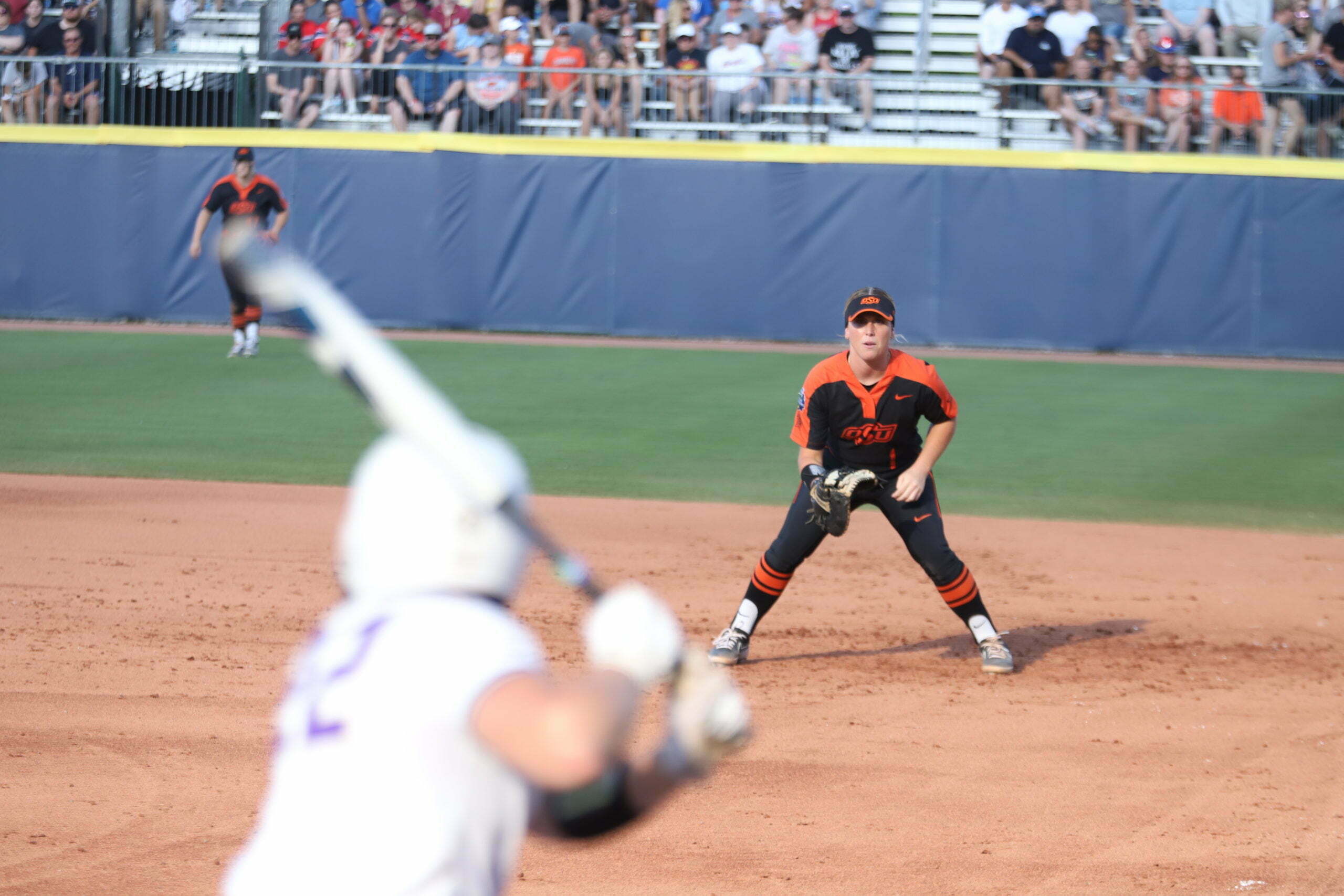 OKLAHOMA CITY — The Dukes are a classic feel-good story in sports, and unfortunately for the Cowgirls, they have to feel bad about it.

Unseeded James Madison knocked off Oklahoma State 2-1 in the Women’s College World Series on Friday evening in Hall of Fame Stadium. The Dukes’ victory comes a day after they took down top-ranked Oklahoma, and the Dukes’ victory came after a remarkable seventh inning.

Karli Petty got hit by a pitch to start the frame, and freshman Scotland David came on as a pinch runner for her. David stole second. Then madness ensued.

Reagan Wright hit a ball back to pitcher Odicci Alexander who turned and caught David in a pickle. After five throws in said pickle, David was tagged, but she wasn’t out. Obstruction was called somewhere along the way, and David was ruled safe at third and Wright safe at second.

So, the Cowgirls had two runners in scoring position with no outs down a run.

Chelsea Alexander put down a bunt. David took off for the plate, but Odicci Alexander made a miraculous diving tag to save the run. It was a tag out of a movie script.

“If that’s not Top 10 SportsCenter, I don’t know what is because that’s probably the best play I’ve ever seen in a career by a pitcher in that situation with that much pressure,” JMU coach Loren LaPorte said. “To see her leave her feet and make that tag, I mean, that’s, it’s unbelievable. I can’t even describe it any other way.”

Kiley Naomi was OSU’s final batter, and she flied out to short to send the Dukes on.

“We had an opportunity and we let it go away,” OSU coach Kenny Gajewski said. “We just didn’t quite execute the way we have been accustomed to, and you got to credit them.”

After stifling the Sooners on Thursday, Odicci Alexander gave the Cowgirls similar treatment. Alexander threw all seven innings where she allowed the one run while striking out two and walking two. She is 18-1 this year.

The only run she gave up came in the fifth inning. Wright hit a one-out, infield single to short and was advanced to second on Hobson sac bunt. Chelsea Alexander provided the Cowgirls with a clutch piece of hitting, getting a ball through the left side. It was a bold move to send Wright home on the play, but JMU catcher Lauren Bernett couldn’t handle the throw at the plate, allowing the run.

It was just the fifth time this season Carrie Eberle started a game after starting the day before. Eberle threw 81 pitches in her four innings of work, where she allowed two runs off seven hits while walking two and striking out one.

A two-out rally scored the Dukes’ first run in the first inning. Odicci Alexander drew a walk to start it. A Logan Newton single moved Odicci Alexander to second. Then Madison Naujokas dribbled a ball back up to Eberle, whose overhand throw to Alysen Febrey at first went wayward, allowing the runner to score from second.

JMU added another in the third when Kate Gordon hit a leadoff home run. Gordon hit the Dukes’ game-winning home run against OU on Thursday.

Sophomore strikeout artist Kelly Maxwell replaced Eberle in the fifth and got the Cowgirls out of a precarious position. Maxwell inherited two baserunners with no outs. Maxwell forced an infield pop up before striking out two to get out of the inning.

Maxwell finished having thrown two innings where she allowed no hits, no runs and struck out five of the six batters she faced.

The loss moves the Cowgirls to the other side of the WCWS bracket. OSU will play the winner of Saturday’s game between Florida State and Arizona at 8:30 p.m. Saturday.

“We have got a lot to play for. These kids love each other. The staff loves each other. This one hurts, they all hurt. Losing sucks. It’s no fun, no matter where you’re at, no matter what you’re up to. But we’ll get over this. We’ll go to bed at night. I promise the sun will be up here tomorrow for sure, and these kids will bounce back and they will be ready.”