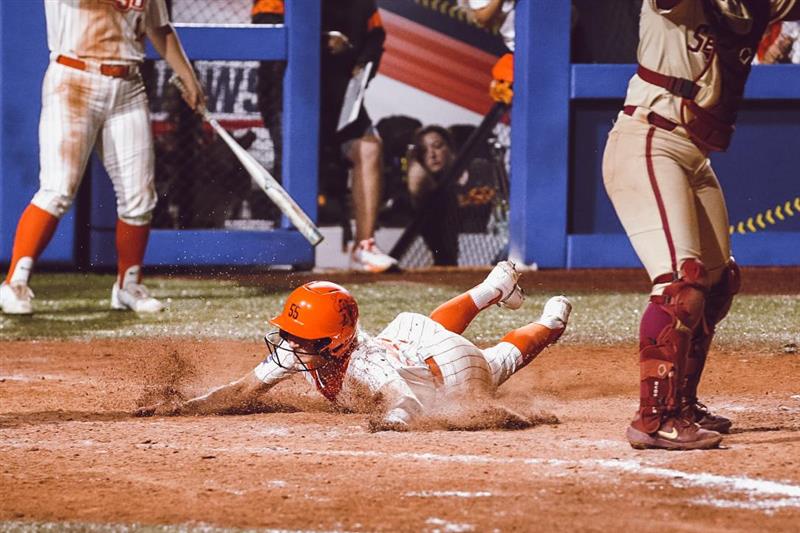 OKLAHOMA CITY — An outstanding Cowgirl softball season ended in the middle of the night.

Oklahoma State fell to Florida State 4-2 in a game that started at 11:50 p.m. Saturday because of rain delays and ended at 2:18 a.m. Sunday. It was the Cowgirls’ second loss in the Women’s College World Series, ending their 2021 campaign 48-12.

“On the season, I don’t know — hard to say right now,” an emotional Kenny Gajewski said. “It’s hard to reflect just quite yet. I don’t know that I want to go there. It’s another great run, another top five. But, hurts. We’re going to lose some great kids. Team will look different this next year. I don’t know how much I want to think about that yet. I just kind of hurt for those kids that this is it. That’s the tough part.”

Errors were an issue for the Cowgirls while in OKC. In the three games, OSU committed eight errors, with four coming against Florida State. OSU committed an error in the third, an inning the Seminoles scored three runs in. Two errors came in the seventh, when Kaley Mudge reached on a bobbled ball before later scoring on a throwing error while she stole third and took home.

Sophomore Kelly Maxwell started in the circle for OSU, and things started promising.

Between Saturday/Sunday’s start and Friday’s relief outing, Maxwell struck out 10 of the first 13 batters she faced in her first taste of the WCWS, but then things quickly turned south.

Florida State hit a leadoff home run in the third inning. After a walk, Mudge slapped a ball into shallow left field to score the runner from first. An errant throw moved Mudge to third on the play. She scored off a groundout during the Seminoles’ next at-bat.

Logan Simunek came on to pitch with one on and one out in the third and got OSU out of the rough frame.

Simunek, a senior, went on to have one of the best outings of her career. She threw four innings where she allowed one run on one hit while walking one and striking out three.

“Well, just she seems to pitch her best in the biggest games,” Gajewski said. “The moment is never too big.”

The Cowgirls got on the board in the bottom of the third inning thanks to an Avery Hobson slap single, then a series of bunts. Chelsea Alexander put down the first bunt to move Hobson to second; Alexander was thrown out at first. Then Kiley Naomi put down a bunt. A wayward throw to first resulted in Hobson scoring from second to cut Florida State’s lead to 3-1.

The Cowgirls added another run in the fifth when Chyenne Factor singled through the right side to score Alexander. However, the Cowgirls just couldn’t quite get the mojo of a rally going.

Things rarely come easy in the WCWS, but the tournament was particularly tough on the top of the Cowgirls’ lineup, a group that had been dominant throughout the season. Naomi, Factor, Alysen Febrey, Hayley Busby and Sydney Pennington went a combined 7-for-42 (.167) with two runs scored and four RBIs while in Oklahoma City.

It was a disappointing end to a remarkable sixth season under Gajewski. On top of the consecutive WCWS appearances, the Cowgirls had a trio of All-Americans this season in Carrie Eberle, Febrey and Busby.

There is also reason for hope going forward with the emergence of strikeout artist Maxwell in the circle. Hobson, a true freshman, also started to come on late in the year. She hit .429 in Oklahoma City, while scoring two of the Cowgirls’ six WCWS runs.