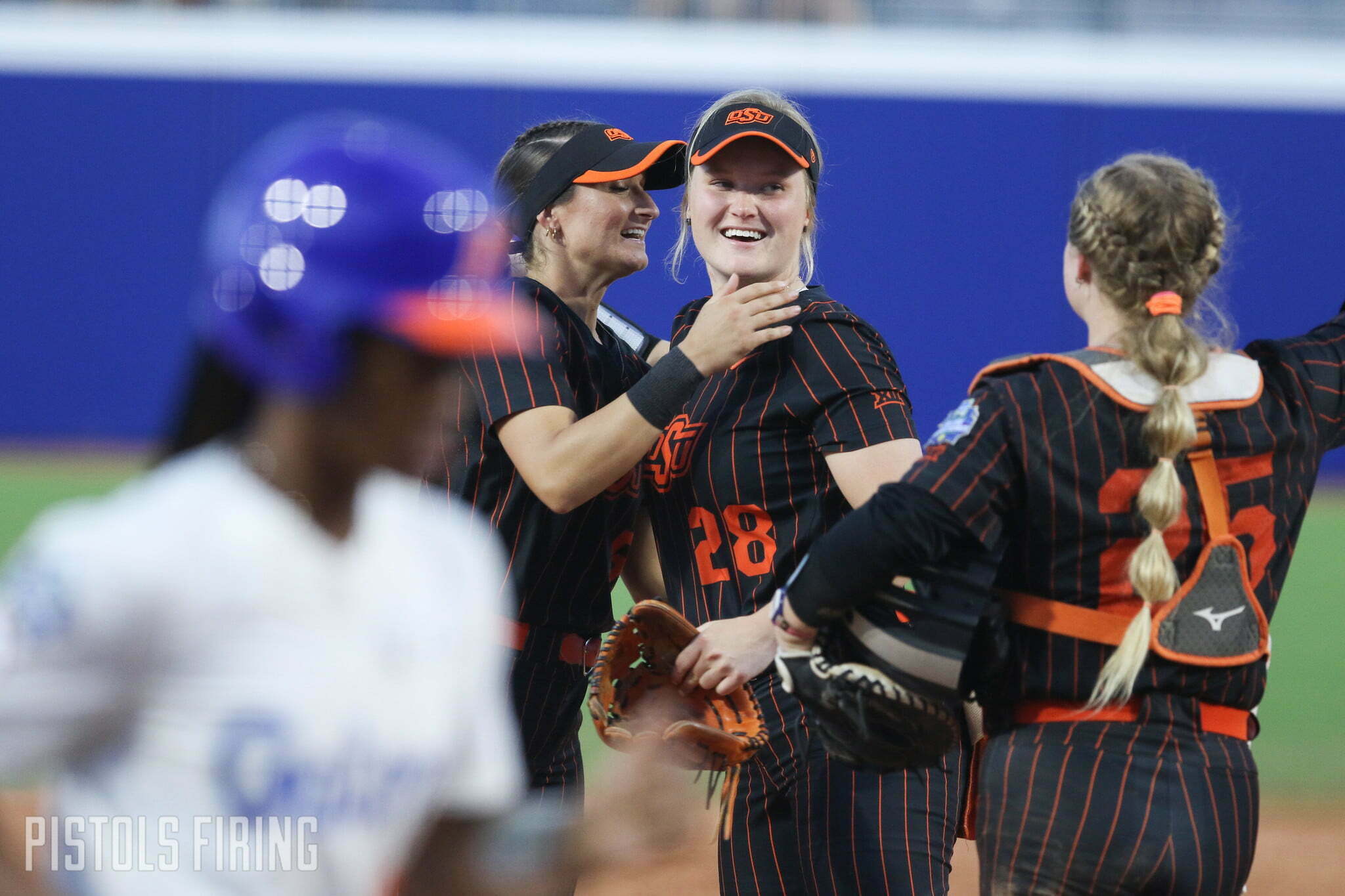 OKLAHOMA CITY — The Cowgirls are a win away from their first WCWS championship series appearance.

Oklahoma State defeated Florida 2-0 on Saturday at Hall of Fame Stadium thanks to another dominant performance from Kelly Maxwell and an outstanding offensive outing from Julia Cottrill against her former team.

Cottrill initially went to Florida from Stillwater High School. She spent two seasons with the Gators, where she won an SEC title after hitting a walk-off home run against Texas A&M in 2021. Her first season as a Cowgirl has had its highs and lows as she has split time with former high school teammate Taylor Tuck behind the plate. Saturday was one of the highs.

She was 3-for-3 at the dish against her former squad. She scored her team’s first run and batted in the other. In her first two at-bats, she saw two total pitches.

Cottrill led off the bottom of the third with a single through the right side. Kiley Naomi moved Cottrill to second with a sacrifice bunt before Chelsea Alexander moved Cottrill to third with an infield single. She scored when Chyenne Factor put down a bunt that Factor reached safely on, giving OSU a 1-0 lead.

Cottrill came up in the fourth inning with Sydney Pennington on third and two outs. Cottrill again swung at the first pitch she saw, singling through the left side to bring Pennington home.

After watching a ball go by in the fifth inning, Cottrill nearly hit the second pitch thrown to her over the wall in straightaway center. It ended up hitting the wall, and Cottrill slide safely into second. In a rare misstep on the day, she was tagged out at third after Naomi hit a ground ball to short.

The Cowgirls have experience playing against former teams. Morgyn Wynne, who had a plate appearance as a pinch hitter Saturday, transferred from Kansas. OSU swept the Jayhawks in mid-April, outscoring KU a combined 25-2 before beating the Jayhawks again to start the Big 12 Tournament. The Cowgirls also swept Texas, Miranda Elish’s former team, winning a combined 8-3 before again beating the Longhorns in the Big 12 Tournament.

Cottrill said she talked with Wynne about the emotions of playing a former team and got this advice:

“I think just remembering at the end of the day softball doesn’t know who’s playing,” Cottrill said. “Keeping it simple was a really big help.”

At 48-12 now, the Cowgirls have averaged 5.3 runs a game. So the two runs against Florida were below average — but they were more than enough for Kelly Maxwell.

OSU’s ace threw a complete game (after throwing a complete game Thursday) where she allowed only three hits while walking two and striking out nine. It’s the first time in the NCAA Tournament she hasn’t hit double-digit strikeouts in a start. Thus far in the NCAA Tournament, she has allowed two runs off 14 hits while walking six and striking out 64.

The nine strikeouts against Florida move her to 302 on the season. She is only the third Cowgirl in program history to hit 300 in a season, joining Lauren Bay (2003 and 2002) and Melanie Roche (1993). But pitchers used to throw a lot more back in those days. Take a look at the strikeouts compared to innings pitched:

With Maxwell dominating on softball’s biggest stage, Berry Tramel asked if this is the best she has ever pitched. A silent assassin, Maxwell smiled and said, “No.”

“I mean, it’s a big stage,” Maxwell said when asked to explain. “So credit all the teams that are playing and stuff. I just think my performance probably is as good as it’s been in the past. “

As if shutting out Florida at the WCWS for the first time since 2018 wasn’t enough, Maxwell wasn’t as rested as she could’ve been. After torching the Wildcats on Thursday night, Maxwell was “randomly” selected for a drug test. She submitted a sample directly after the game that came back diluted, according to OSU coach Kenny Gajewski. So Maxwell was asked to stay in place until she could provide another sample. By the time that happened (and came back negative), Gajewski said Maxwell didn’t get back to the team hotel until 3:15 a.m.

“I don’t know if you’ve ever had to drug test, but it’s not fun,” Gajewski said. “People are staring at you. You’re doing that. You’re trying to test. You’re tired. It’s 12 [a.m.]. She got back to the hotel at 3:15 [a.m.]. If we have to play the next day, if this format hasn’t changed, if we have to play again, this is a tough deal. I’m not mad at anyone. I just know this process needs to probably be looked at to see if we maybe can do it in the mornings of game days or something. The first games, no problem, right? They are done. But we have a long game, we start a half an hour late, then we go through this deal. It’s rough.

The past two times the Cowgirls have made the WCWS under Gajewski, they’ve won their first game before dropping their next two. The 2-0 start puts them on new ground with a real shot at playing softball on the final day of the college season.

“It feels good,” Gajewski said of taking the next step. “It wasn’t easy. The last inning, the last couple innings were kind of touch-and-go there. Kelly was on fumes. We knew that. We had Morgan Day hot. We were probably one hitter away, one hitter reaching base away from going to Morgan Day.

“It just feels good. I’m really happy for our fans. I’m really happy for our alumni, happy for our team. So many people put so much into this program, I mean, it’s wild. Just happy for all of them. They’re all up there, all cheering. We have an absolute mess with tickets, trying to take care of everyone. We’re on the secondary market trying to buy ’em. It’s absurd what the prices are. It’s great but it’s absurd. We want to get everyone here, let everybody be a part of this. I’m just grateful for our kids and the way that they played.”

The win gives the Cowgirls another day of rest. The next time they’ll play will be 6 p.m. Monday. They’ll play the winner of Arizona and Texas, two teams that play at 6 p.m. Sunday. OSU will have two attempts to win one game against the Arizona/Texas winner. If the Cowgirls can do that, they’ll be in the championship series for the first time in program history. For what it’s worth, OSU is a combined 5-0 against Arizona and Texas this season.