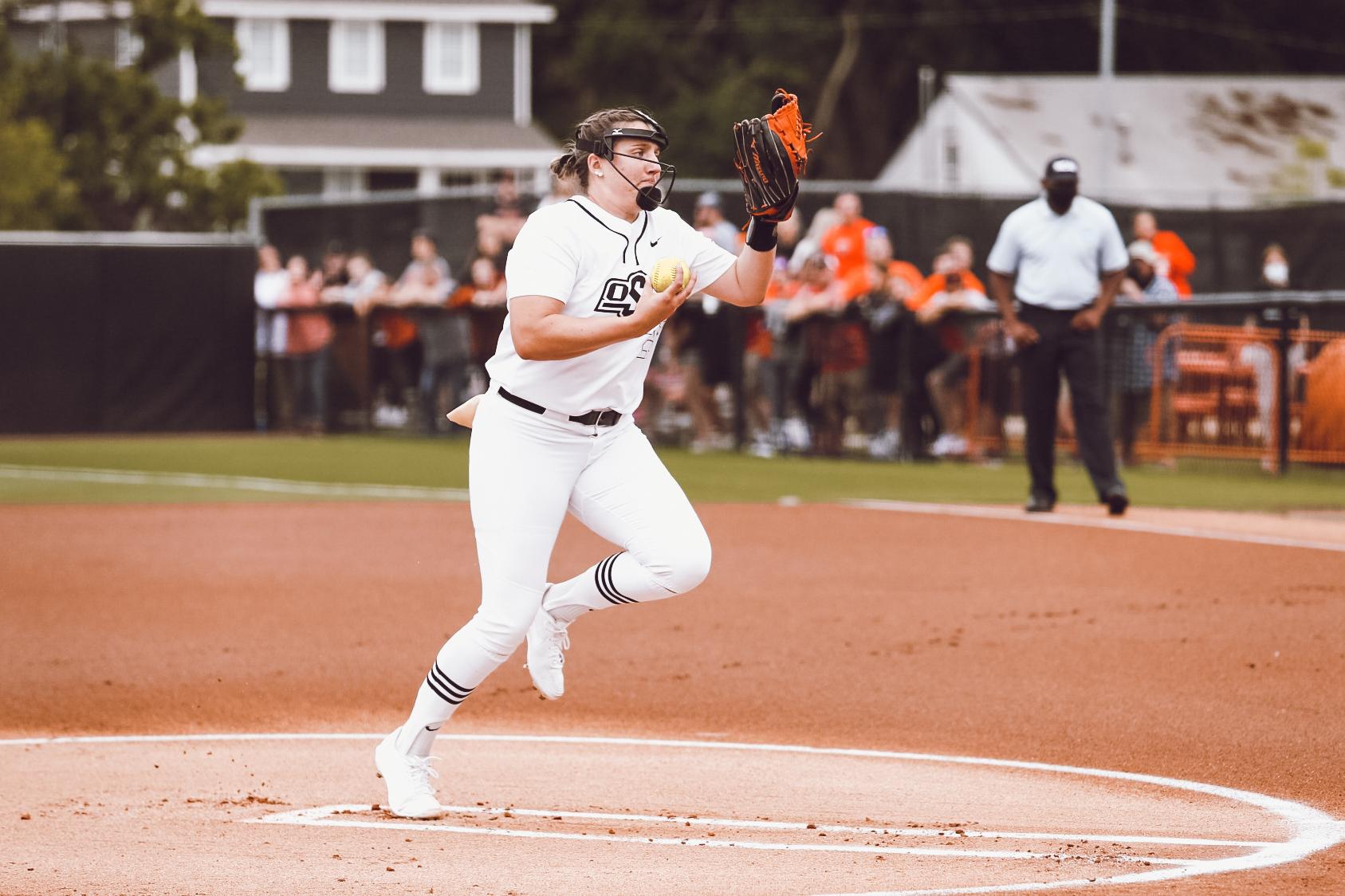 STILLWATER — For the first time this century, the Cowgirls are headed to consecutive Women’s College World Series.

Oklahoma State beat Texas 2-0 on Sunday in Game 3 of the teams’ Super Regional in Cowgirl Stadium, and the Cowgirls did so off another stellar outing from their Ace.

Carrie Eberle threw her sixth seven-inning shutout of the year as she allowed four hits, walked one and struck out three. After spending the first three seasons of her career at Virginia Tech, Eberle, an All-American and Big 12 Pitcher of the Year, is headed to her first Women’s College World Series.

“It’s really indescribable,” Eberle said. “To be able to just have that experience with this team, it’s gonna be amazing. This is what I came here to do. This has been our goal all year long. We’re not anywhere close to done.”

Waving hasn’t worked particularly well for the Longhorns. After UT catcher Mary Iakopo waved a Cowgirl baserunner off the field after throwing her out in the Big 12 Tournament, Iakopo had an error at the end of the game that gave the Cowgirls the win.

UT pitcher Shea O’Leary dealt for much of Sunday’s game, she gave a wave after the fourth inning as she trotted to the dugout, and then she ran into some trouble in the fifth.

O’Leary hit Sydney Pennington and Karli Petty with pitches to start the fifth inning. After Reagan Wright put down a sac bunt to move the two runners into scoring position, freshman Avery Hobson chopped a ball up the middle to score the game’s first run.

Hobson was caught trying to steal second. With two outs and Petty on third, Chelsea Alexander put down a beautiful two-strike bunt and legged it out to score Petty in what would be the game’s final run. OSU coach Kenny Gajewski said he has been trying to get her to bunt with two strikes all season.

“That was a huge moment,” Gajewski said. “It’s a huge play that we’re going to talk about at OSU for many years. It’s a huge way that I’m going to show kids that are coming in here that this is how you play, you just leave it out there. You’re not worried about what might happen. You just set sail on the sea of consequence, and she did it.”

The runs were the first two of the Super Regional OSU had scored without hitting a home run. The Cowgirls did hit a pair of would-be home runs that came just foul of the left-field foul pole.

It’s the ninth time in program history the Cowgirls have qualified for the WCWS. OSU last went in 2019 (the last time it was played), where the Cowgirls went 1-2.

“I don’t want to start reflecting yet,” Gajewski said. “That’s not a good place to be. It means you’re satisfied where you’re at. I’m not going to go there, but what I’m going to tell you is this team, and Texas, all these teams that have got this far, these kids have poured it all out.”

Oklahoma State will play Georgia on Thursday in the Women’s College World Series in Oklahoma City.