Text exchange with my mom last night (she’s in Stillwater):

You don’t need to read anything else on conference realignment besides this. Also I find it very funny that Loftin (A&M’s president) is miffed at “a violation of trust.” Me thinks the bowtied one knows a violation of trust when he sees one. (Dr. Saturday)

Okay, maybe this too. (College Hotline)

Ubben talks about the importance of Joseph Randle. (ESPN)

Strong statistical breakdown by John Helsley that says OSU’s defense could be championship worthy even if it doesn’t appear that way on paper. (NewsOK)

According to this report, Juron Criner is not in Stillwater. (Tuscon Citizen)

Sounds like Thursday night’s pregame is going to be a circus. (okstate.com)

An alternative to the Weeden2Blackmon campaign. (Blackmon for Heisman)

Anthony Slater does a good job breaking down the matchups heading into Thursday night. (O’Colly)

Great post by Eamonn Brennan on what makes up a great college hoops arena (another GIA shout out). This makes me miss having basketball around. (ESPN)

Gottlieb says Gallagher-Iba Arena is his favorite arena in the country. (ESPN)

Lastly, 20% of coaches interviewed say GIA is the toughest place in the country to play, including Roy Williams: “I’ll never forget the first time we played there. They had that Pistol Pete and he fired that gun. I’d about like to die.” (ESPN)

Ryan Herrington has Peter Uihlein as his 2nd best player in college golf for the 2011-2012 season. (Golf World)

Rivals says Brandon Weeden is falling in the QB rankings, they currently have him at 9th. (Rivals)

Missed this over the weekend but Perrish Cox was cut by Denver. (Denver Post)

Speaking of Jesse Palmer, I don’t need him anywhere near this thing: 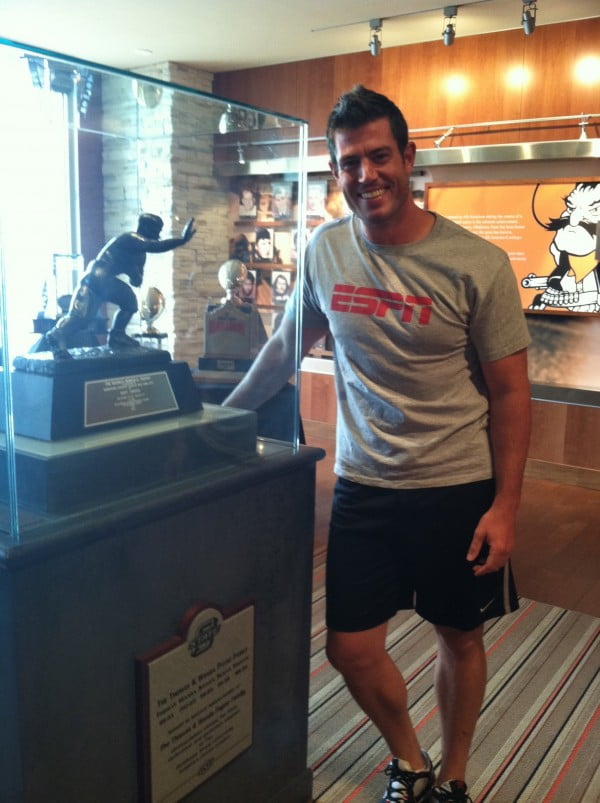 Burns is awesome…is that his Prius at the end? Anyone know?