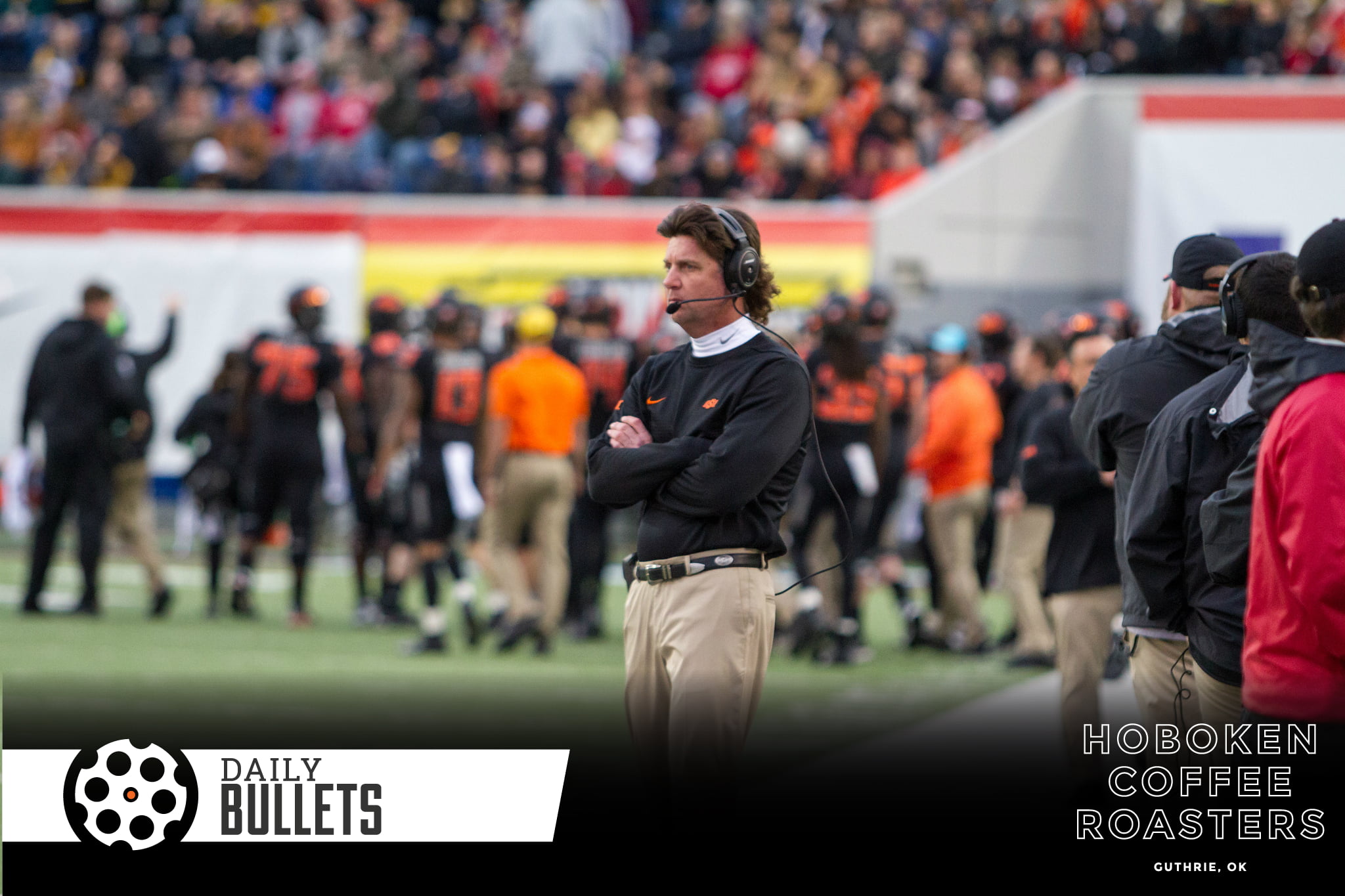 In honor of Bedlam basketball tomorrow (and the absolute beat down Sooner Football received last weekend), the word of the day is “schadenfreude“: enjoyment obtained from the troubles of others.

This was a team capable of better. [NewsOK]

I have the hardest time landing on who this team is – a team capable of gashing a Texas team talented enough to beat Georgia was also capable of being outscored by an offensively-inept TCU team.

• SB Nation’s Bill Connelly dove even deeper into the above discussion – how flummoxing this team was in the context of Mike Gundy’s teams.

On the other hand, this was Oklahoma State, a program becoming one of the most consistent in college football. The Pokes had lost plenty of stars before and turned out just fine. They had won at least nine games in eight of the previous 10 seasons and had ranked in the S&P+ top 30 in 10 of 12.

So what was it going to be?

Or was this yet another underestimated, top-15-caliber Cowboys squad?

The answer was yes. [SBNation]

First – stop what you’re doing and go read the piece for a dose of macro-level perspective on Cowboy Football. “One of the most consistent in college football” and “yet another underestimated, top-15 caliber Cowboys squad” are akk-urat descriptors of Cowboy Football over the last dozen years.

It’s the top 15-potential with a top 50 record that’s perplexing this year.

• Bobby A. floats his take on potential offensive coordinator hires.

I could see a co-coordinator situation with Henson and Dunn. Henson would have an edge as he has called plays before, but I have no doubt that Dunn would be more than capable.

If Gundy does move that direction, I would expect that Henson, as he did at Missouri, would continue to coach the offensive line. Dunn would be logical to coach receivers. That means a quarterback coach would be brought in and there would be lots of options. [GoPokes]

His stance is that if you don’t hire either one you’ve got to bring in a more experienced guy, so as to not upset the chemistry (a la Joe Wickline).

The juicy tidbit was dropping that (per a source) Gundy and Todd Monken had at least talked about the possibility of Monken coming back.

• This comment from Mike Boynton on Cam McGriff stuck out.

"There's a lot on his plate, but Cam is completely capable of handling it. He's prepared for this for the last 2 years."@thacoachmike on @Cameron_McGriff performance against Iowa State. #c2e #okstate pic.twitter.com/FFHyAphTRO

Cam McGriff and his consistency are huge for this team. If he looks like an NBA 3-and-D wing and hits with volume edging up from 13 points per game into the higher teens (16-19), they can get up into the 70’s and have a chance.

Those extra points to break the cold spells offensively would go a long way.

• Porter weighed in on the garden variety of offensive coordinators in Stillwater and slides in his take on Yurcich leaving.

The point is that the Holgorsen-Monken-Yurcich triumvirate is as wildly different as you can get from a personality standpoint. Monken is loud and hilarious. Yurcich is quiet and more subtle with his humor. Dana may be crazy. But they all fit into the bigger picture. They all helped usher in a new era of OSU offenses. They all killed from a statistical standpoint.

To be sure, this is not an anti-Yurcich argument. It’s a pro-culture argument. Would I have liked to keep Yurcich another year? Sure, but I don’t think is as tricky of a spot as Gundy was in last year without a defensive coordinator. I don’t think you have to make a big splash and offer Kliff, like, $3 million a year to come call plays. [PFB]

When a head coach hires someone to coordinate their side of the ball, there will generally more interference than early season AJ Green.

I’m not positive what the defensive culture is in Stillwater but there’s offensive potential flowing from the Arkansas Waterfall. And there’s much less pressure (and importance) to who OSU hires at OC than at DC.

• Going behind the curtain of Mike Gundy’s decision-making, here were his recent comments about the process behind hiring Mike Yurcich.

“We hit a homer with Mike,” Gundy said. “We went and got him because I felt like if we had gone and gotten a name guy, in two years, he would’ve left again because that is what was happening to us. We bring a guy in, we average 50 points a game and the guy leaves.

Gundy has been spotty on some hires ( two of three hires seem to work out) but his OCs have been very successful. I’m pulling for someone he’s not mentoring and respects enough to hand playcalling over to.

• Welcome to 2019 – where the idea of joining a group centered around conversation with other people in your physical presence is countercultural.

It is with this in mind, and in the spirit of the New Year, that I suggest you make a simple resolution: join analog social media.

As I’ve discussed before, analog social media describes organizations, activities and traditions that require you to interact with interesting people and encounter interesting things in the real world. [Cal Newport]

You can count the PFB Tailgate from homecoming as analog social media if you attended. Not quite as cheery but this piece by David Brooks on individualism today was thought-provoking as well.

• Thought this was an interesting spin on the definition of a “grudge”.

The crucial difference in the way Ms. Hannah views grudges is that she believes a grudge is not a feeling. Rather, it’s a story that one can learn and benefit from. “When there’s some kind of suboptimal thing that somebody has done to us, the grudge is our story that we remember about that incident, because it benefits you to have that story remembered.” [New York Times]