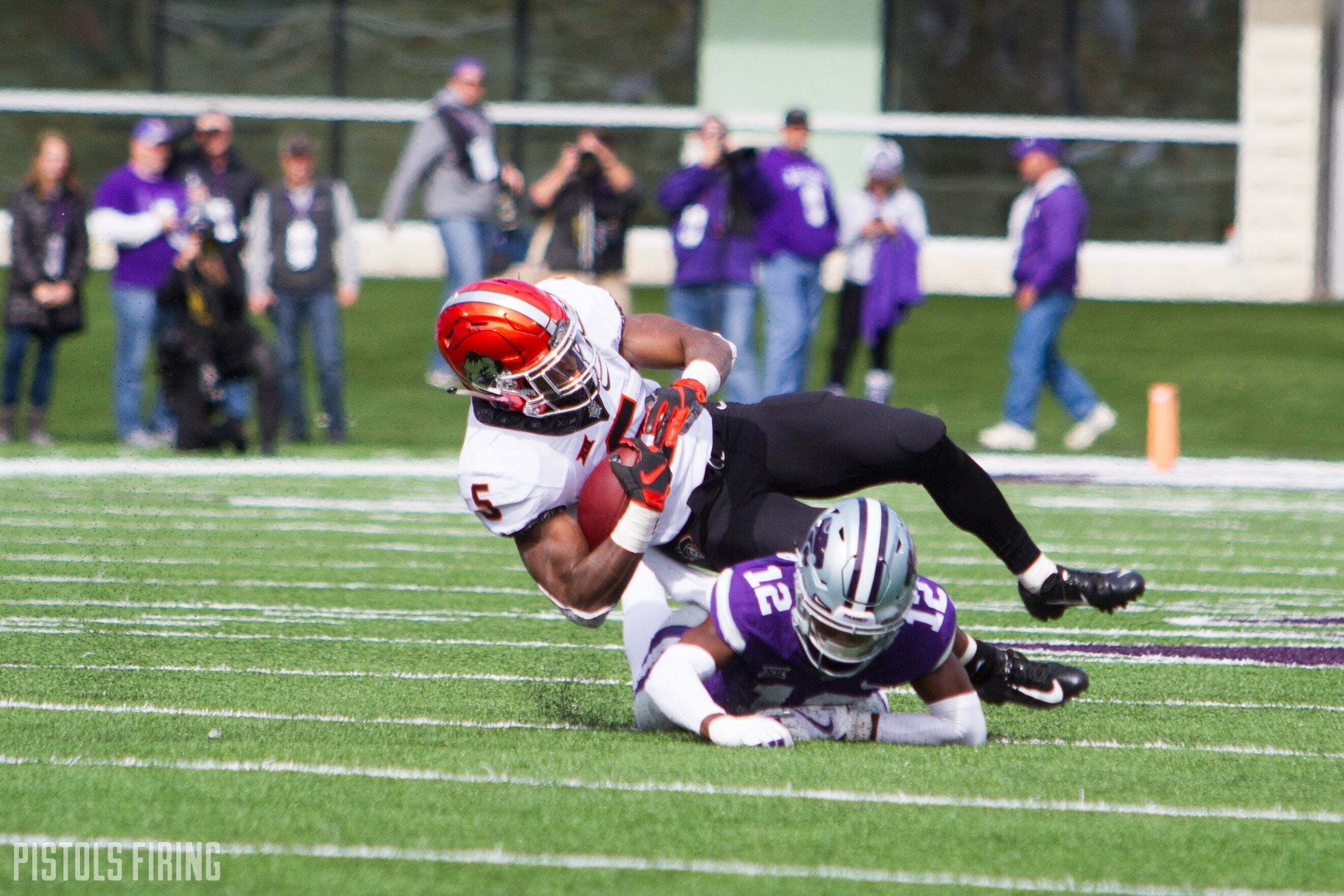 After the OSU game (“game”) today, we had friends over for a little dinner party, and I forgot all about points per drive and freshmen QBs. But there were a variety of things that kind of gnawed at me all day as OSU laid one of its biggest eggs in recent memory up in Manhattan. I revisited them after our dinner guests left and thought I would empty a few pixels onto the page just get them out there before a reset on Sunday. Let’s go.

1. An offense that’s going backwards: Kansas is a better defense than Iowa State, which is a much better defense than Kansas State according to points per drive numbers going into Saturday (this is probably not true in the long run but statistically it is right now). For some reason, the Oklahoma State offense went the opposite way. It played its best game against KU. Then it was ok against Iowa State and downright unwatchable against Kansas State.

The reasons for this are too multiple to list in the length of the post I’m trying to write here, but they include the following:

Other than that, we’re good here. I think this is No. 1 on my list because it has always been the thing I could bank on over the past decade. OSU might not have anything else, but they’re definitely going to have a lights out offense that’s never out of games. That’s not what it felt like on Saturday.

2. That soft second-half defense: I just can’t get over it. Gundy at least acknowledged it after the game.

“I thought we had good schemes. Defensively, when they start pushing us around a little bit late in the third quarter …”

“I really don’t think that the penalties were undisciplined, more so that, like I said we just got pushed around quite a bit of times.”

They really did get manhandled on defense. I don’t know why. OSU looked strong on that side in the first half, but faded hard late and got run over by half of KSU’s offensive players. Maybe there was frustration over OSU’s offense not giving them anything to work with. Maybe they were tired. I don’t know. What I do know is that it was really tough to watch.

3. Gundy’s unwillingness to be creative: Serious question. Do they have fakes in the special teams playbook? Do they have trick plays? Is there anything in the bag of goodies outside of the “Justice vs. five defenders” and “Jackpot with Tylan” plays?

I get it. The most liberal you’re getting is letting the mullet grow a week longer than normal, but sometimes it feels like OSU is calling plays as if it has Alabama’s defense and, well, Alabama’s offense too.

4. Gundy’s unwillingness to pop off: I think there is a special cadence to the way a coach carries himself. That is, 99.5 percent of the time it benefits you and your team and your program to present yourself as if your attendance at a British royal ball is at stake. I get annoyed when people see calm, composed leadership and confuse it with ambivalence.

There are conflicting things at play here, though. The first is that it is starting to look like he doesn’t care that much, and if I — as someone who fundamentally understands why he’s doing what he’s doing — sense this, then he might need to blow off some steam just to remind everyone that he does in fact care.

An aside: I should include it on this list, but people complaining about Gundy getting complacent because of his big contract is silliness. If Gundy was going to get complacent over money, it would have happened many John Deeres ago.

The second is that — lowers voice to a whisper and looks around the room — he knows they don’t have the goods and nothing he does is going to matter anyway. I don’t know what to do with these two things or how to reconcile them, but there is certainly frustration.

5. Lack of fire at the top: I know I keep coming back to this, but what’s the list of great athletes who lacked panache (at times) in key moments? Somewhat humorously, somebody named “Sanders” who played in Stillwater probably tops the list. But I’ll wait on you to fill the rest of it out.

I think celebration for the sake of celebration is the silliest and it certainly doesn’t give you what you need to compete, but all the evidence we have in the history of sports says that you go as your leaders go. And if OSU’s two most visible leaders right now — Gundy and Cornelius — are going with about as much energy as me after a west coast game with nothing but decaf, then I think the questions are warranted.

I guess I don’t understand the argument of, Well they control their emotions really well so obviously they’re doing a great job. This isn’t a polygraph test. It’s football. Half the deal is being emotional!

6. That these games have felt over: I wanted to think or talk myself into believing OSU could come back against Iowa State and Kansas State, and I haven’t truly been able to do it in either one. When both opposing teams took a lead into the fourth quarter, both of those games felt mostly over, didn’t they? Maybe not 100 percent but pretty close. That’s telling.

7. No time to panic: Gundy’s words after the game. “This is a week-to-week deal. We will practice again, get more coverage, get some rest. You can’t panic. You can’t do that, you know? We have to look and see what we are doing, where we are at, and what can we do to correct it. We are certainly aware of the situation and I mean, you don’t have to worry about that. We know what’s going on, we are trying to do what we can as soon as possible to fix them.”

Sure. Fine. Yeah. I get it. It would be a lot weirder if he got up there and said, “We are definitely panicking!” I guess I would just prefer a little less “We got this” and a little more “I’m kinda pissed about being the first win for three different Big 12 teams over the first four weeks.”

8. I don’t think Gundy will play the freshman: This probably actually annoys me most of all, but because it’s a hypothetical I’ll rank it last. If we get to the OU game, and Gundy still has Sanders pouring Gatorade for the Wallace Bros. and giving Tyron neck massages at halftime, there will not be enough server space in the entire universe for the forthcoming OSU fan outrage. Honestly, it doesn’t even really matter if he’s ready or not, you have to prepare him and hope it works.