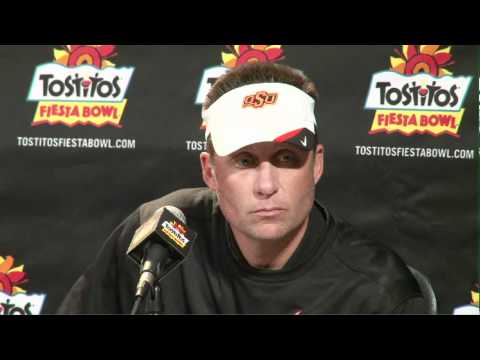 I’ve been trying to collect my thoughts ever since Colton Chelf swallowed nice chunk of end zone grass as the prelude to Quinn Sharp’s redemption (which could absolutely be a movie title), and I’m just now settling into a few leftover thoughts and stats from Monday night. Oblige me? Let’s go.

Some Random Thoughts
The Chelf TD/non-TD/Sharp kick had to be one of the top 10 gambling moments of the past decade. Darren Rovell reported that $30M (as in million) swung on the fact that Chelf’s TD was DQed and Gundy settled for the field goal.

There’s been a lot of gushing about Andrew Luck, a lot of hyperbolic columns written, and a lot of “he’s a sure thing” tweets sent since Monday night, but I have a question: what exactly did he do that Brandon Weeden didn’t? Besides lose?

On that note, what exactly does Weeden have to do to get some accolades from the national media for his last two years? He came in and went 23-3 as the starter, rewrote every passing record at a school that wasn’t exactly bereft of them, and singlehandedly restructured an entire conference in the process. If he had a Gator on his shoulder or a red helmet with white numbers on it we’d be checking the web daily for updates on heart transplants for Pat Forde and Ivan Maisel.

I’ve gotten a lot of emails and messages about how horrendous the Stanford band was. I get that, and I understand that they were annoying, but as David Ubben pointed out, people need to understand that irreverence is kind of their thing. Now that doesn’t mean you shouldn’t have been annoyed by them (and if they did in fact act like they were flying planes and crashed them into the ground then thats horrific), but you shouldn’t have been surprised at the fact that they acted like pompous, over-educated adolescents. That’s who they are.

It got lost by the way the game ended, but that 4th and 3 at midfield with 10 minutes left was one of the top ten plays of this season. Ballsy by Gundy to call it (though it was probably percentage-wise the right play), icy by Weeden to throw a strike, and nasty by Blackmon to turn it into 21 yards and keep OSU marching towards the tie.

The all blacks were spectacular, definitely one of my favorites of this season. I think my #1 favorite was actually the black-white-orange they wore in Ames but I can pretty much file that baby away to the memory bank because that combo will never be worn again.

If I would have told you casually before the season that OSU would play the #4 team in the country and rush for 1 yards in one of its games this season you would have said one of the following things:

You would not have said “wow, Fiesta Bowl champs, baby!”

I saw a lot of chatter after the game about Gundy’s decision to kick the field goal and I agreed with it for two reasons. One, they were kicking an extra point, OSU has missed three of those in the last four years. There was no way they were missing this one. Two, they had just been stuffed from the four for three straight plays two quarters earlier. I’m not saying OSU wouldn’t have scored the TD, it just felt like the extra point was the safer choice at that point.

Records That Fell
Passing yards:
Old: Zac Robinson with 329 vs. Oregon in the ’08 Holiday
New: Weeden with 399 against Stanford

Tweet(s) of the Night
These were 1A and 1B because I can’t decide which is better/funnier. The first one was just an epic response to my musings on how bad the bowl shirts were and the second a classic one-liner about the most obnoxious part of Stanford’s persona. Good work, fellas.

Don’t forget, you can watch a replay of the game in its entirety on WatchESPN any time you want. This could come in handy for the next 17 conference basketball games…