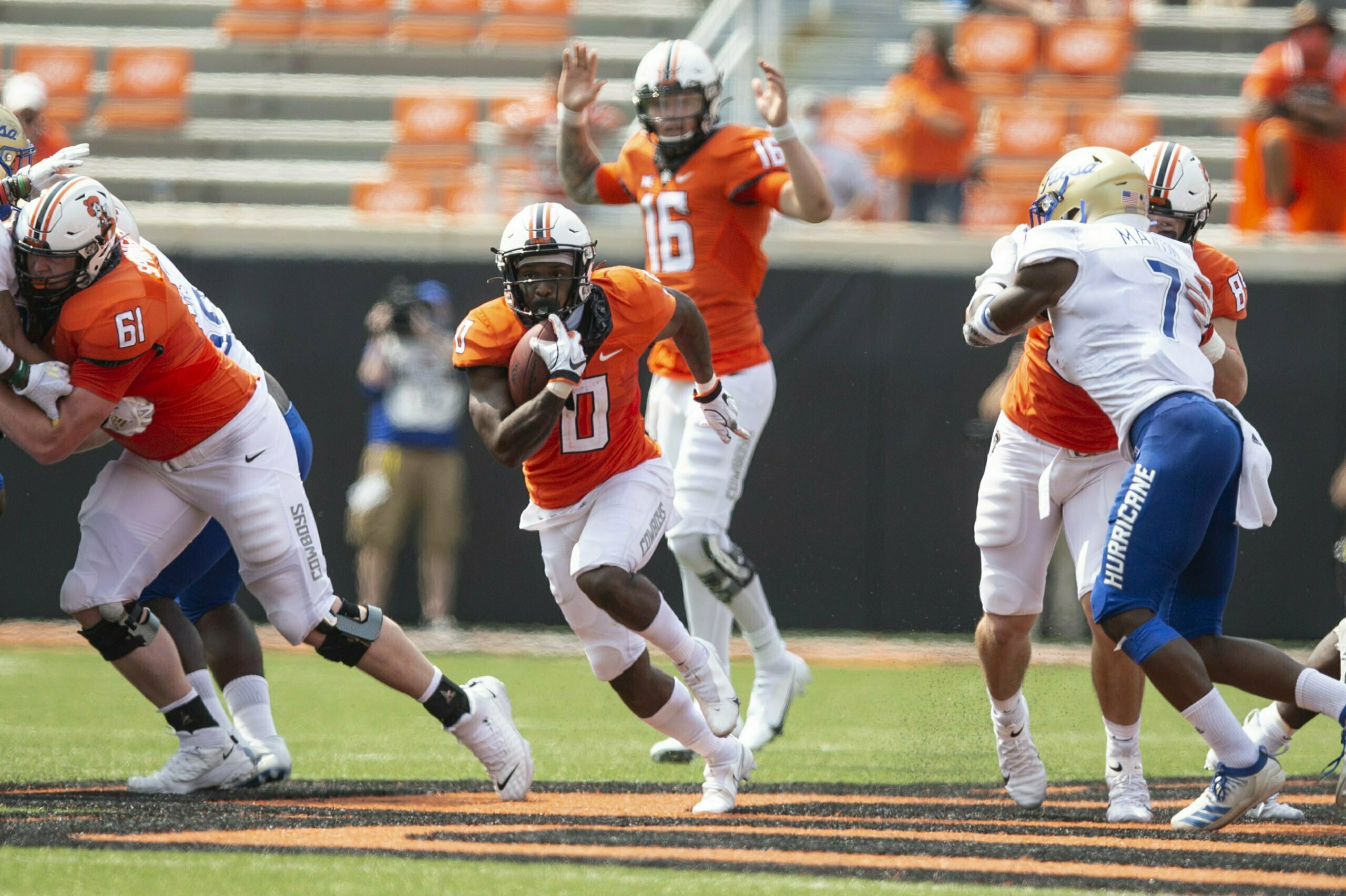 Oklahoma State had a tough home opener this past weekend in Stillwater. The Tulsa defense held the Cowboys to just 279 yards and 16 total points. Starting quarterback Spencer Sanders and several other Pokes sustained injuries during this game. The offensive line experienced some of these injuries and, as InsideTexas.com’s Ian Boyd points out, the starting unit looked quite a bit different than the unit that finished the day.

After Sanders’ went down, we got to see not one, but two other OSU quarterbacks, JUCO transfer Ethan Bullock and true freshman Shane Illingworth. Bullock struggled through about two quarters of play, and Illingworth came in late and was able to help the offense score some points and pull out the victory.

Below I wanted to cover several things that stood out after watching the Pokes’ offense as it struggled to find a rhythm against TU.

With Sanders leading the charge, OSU’s first drive was a long one going for 76 yards on 17 plays. Offensive coordinator Kasey Dunn had the offense moving with some tempo and they were mostly basing out of 11 (one running back and one tight end/Cowboy Back) and 12 personnel (one running back and two tight ends/Cowboy Backs). The Cowboy Backs were lined up in the fullback spot, as H-backs, on the line of scrimmage in the tight end spot and split wide, including the formation shown in the image below where both Jelani Woods and Logan Carter when split to the same side.

We saw a heavy dose of zone running schemes on this drive and in the passing game Sanders found Carter near the sideline on the play shown above and Dillon Stoner on an out route.

When Bullock took over, the Pokes were mainly in 11 personnel formations with some 10 (one running back and no tight end/Cowboy Backs) and 12 sprinkled in. The running scheme continued to be zone heavy and in the passing game Bullock was really only able to connect on short throws and finished the day 8-of-13 for 41 yards.

Illingworth took over for Bullock after the JUCO product threw an interception late in the third quarter. Dunn decided to utilize more 12 personnel formations with the freshman, including a decent amount of the Diamond formation. We also saw some gap scheme running concepts mixed in and a focus on getting the ball to stud wideout Tylan Wallace in one-on-one situations. Illingworth finished the day 4-of-5 for 74 yards and helped lead the Cowboys to 13 fourth quarter points.

For a refresher, the terms Inside Zone and Outside Zone refer to blocking schemes that have the offensive linemen blocking specific gaps instead of a certain defender. If an O-lineman has a defender lined up in front of him, he blocks him. If he doesn’t have a defender lined up in front of him, then he steps toward the side the play is going and either helps double team block a defender or moves to the second level (think linebackers or safeties playing up near the line of scrimmage).

A season ago against the Golden Hurricane, former OSU offensive coordinator Sean Gleeson’s offense ran wild with Outside Zone. Including plays like this one below.

Chuba Hubbard’s field vision paired with how the offensive line was able to block this running concept led to a huge day on the ground for the Pokes. However, this year we just didn’t see the same results early on against Tulsa from this play.

Now, you have to remember that the offensive line was being shuffled around and QB1 went down with an injury. Although, overall the O-Line as a whole wasn’t able to get a good initial push against the defense to open up running lanes, and when holes did open up, Hubbard’s awareness and decision making wasn’t up to par with what he showed a season ago against TU.

In the diagram and video below, I’ll show one example of these struggles.

As you’ll see in the following clip, right tackle Hunter Anthony misses his cut block attempt, center Ry Schneider allows too much penetration inside and it looks like Hubbard might have cut back a little too early, all leading to a negative play for the OSU offense.

With Bullock not able to get much going in the passing game, the Cowboys had the Tulsa defense loading up for the run.Dunn seemed to be favoring runs to the left, behind experienced and talented left tackle Teven Jenkins and left guard Josh Sills, and the TU defense started to catch on.

One bright spot for the running game on Saturday was redshirt senior running back LD Brown. There had been rumblings of his improvement in the offseason, and it came to fruition against Tulsa as Brown showed great vision and excellent acceleration when he saw a running lane.

In the clip below, you’ll see the Cowboys running zone again. At this point in the game, the offensive line had some time to settle in after O-Line coach Charlie Dickey made some in-game adjustments. Jenkins is now on the right side, with Sills remaining on the left, not allowing the Tulsa D to cheat one way or the other.

Here’s another angle of the play shown above.

And, even though this one got called back for a hold, Brown shows an excellent burst of speed through the hole that I don’t think I’ve seen from his in the past.

Brown finished the day with 61 yards on nine carries, averaging 6.8 yards every time he touched the ball, and I think he outplayed Hubbard in this one.

As I’ve mentioned above, the Cowboys primarily stuck to a zone running scheme against TU. However, when they did move to the gap scheme they saw success. Specifically with Guard Tackle (GT) Counter, which I counted them running three times, they averaged nine yards per attempt.

For example, the play below picked up about six yards and the first down. In the following diagram, the playside of the offensive line, or the side the ball is going to, blocks down, or away, from the play. The backside guard and tackle pull around to perform a kick out block on the defensive end and a block through the whole on the linebacker.

Below is another example of the Cowboys running GT Counter for a big gain.

So, why didn’t OSU utilize pulling linemen more in their gameplan?

Well, as Adam Lunt from the Tape Doesn’t Lie Podcast pointed out to me, these gap scheme-type plays were more of a Sean Gleeson staple than some of the previous offenses. It might not be something Dunn is comfortable calling. Additionally, on all three GT Counter plays, Sills was the pulling guard. This suggests that maybe Dickey and Dunn don’t feel comfortable with anyone else pulling at that position, which would allow the defense to key on this more if it’s ran too many times.

I’m going to keep this section short, as a good chunk of OSU’a 14 completions were targeting Wallace in one-on-one coverage, quick outs and check downs, but I did want to point out one thing that caught my eye. We did see some of the heavily-used concepts from the 2017 offense pop back up in the gameplan. This was something many people talked about in the offseason, including high school coach Wesley Ross in an article he wrote earlier this year.

For example, one of Bullock’s completions was on a Y Cross. Ross explains the play below.

The X will run vertically to try and blow the top off of the coverage.  The Y will run an intermediate crossing route going under sam and over the mike with an aiming point of 18-22 yards deep on the sideline.  This will also sometimes be complimented with a short underneath route by a receiver or back to the weak side depending on the formation/motion.  The backside split end will run a post curl.  Against free access he will take 7 steps vertical then accelerate to the post with 4 steps (2 big 2 small) then stick his foot and work back to the quarterback.  The top end of the route should be 15 yards.   It is important that he does not rush this route so that it times up correctly with the quarterback’s eyes, who will only be looking to him late in the progression.

Here’s his diagram of the play.

And, below is the clip from this past weekend’s game.

The following video shows another angle of the same play.

After this one, the focus seemed to be on the offensive line play, and although it wasn’t great, I think things started to turn around later in the game. The lineup they had out there late may not be the strongest group we’ve seen in OSU history, but I think they will continue to improve as they get some snaps under their belt.

Hopefully we see a better all around showing next week against West Virginia, no matter who rolls out as QB1 for the Pokes.