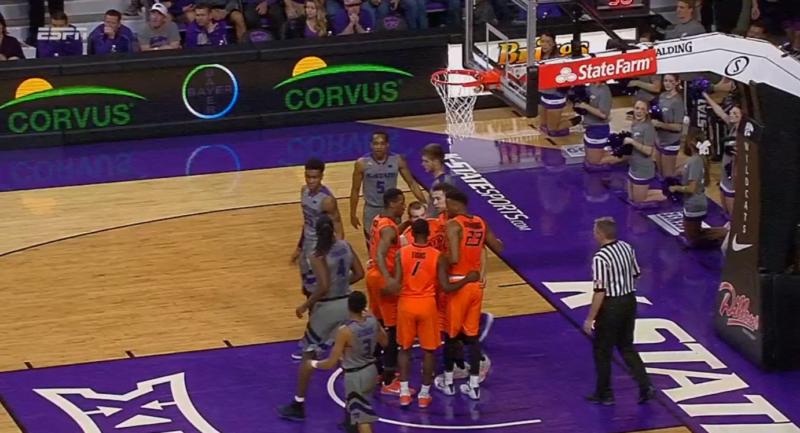 Once again, Oklahoma State overcame a deficit on the road on Wednesday night to take down Kansas State 80-68. Boy, was that fun.

Let’s break it down with a by the numbers look at some of the big numbers that shifted the game.

5: The number of consecutive road wins this basketball team has won. I thought Adam Lunt said this best on the twitter. Safe to say expectations should be tweaked.

What a great win. I fully expected to lose this game. I guess 8 years of dismal road performances will do that to you.

This current five-game road win streak in Big 12 play is the longest since the 2012-13 team which featured Marcus Smart, Le’Bryan Nash, and Markel Brown. And Phil Forte. And Brian Williams. And Philip Jurick!

It’s kind of embarrassing how loaded OSU is at the position, and will be for several years to come. Jawun Evans dropped 21 points and 9 assists, and Averette came off the bench with 21 minutes and hit all 6 field goal tries — adding 13 points and 3 assists.

That’s the type of depth that can make you a dangerous team in March.

42: You’ll never believe it, but this is the number of points scored in the paint against K-State.

Playing with Mitch Solomon and Lucas N’Guessan at the center, Oklahoma State outscored the Wildcats 42-22 in the paint, adding 11 points on second chance opportunities.

Underwood utilized Leyton Hammonds effectively as the big in some lineups, and he was all the better for it. Hammonds had a double-double and scored 18 points. He played in and around the bucket, and thrived in the paint.

14: Kansas State lead by as many as 14 points in the opening half, before Oklahoma State mounted a 14-0 run over the next five minutes to tie the game at 33 all. OSU turned what may have been a demoralizing halftime deficit into a 1-point deficit at the break.

90%: Oklahoma State has won 9 of its last 10 games, dating back to a road win over Texas Tech on Jan. 21. Simple math tells me that winning percentage is 90 percent.

After dropping the first six games in conference play, I would have never ever ever ever made that bold a prediction that it could be done. This team has gone from a potential NIT team to a potential 6-seed NCAA tournament team.