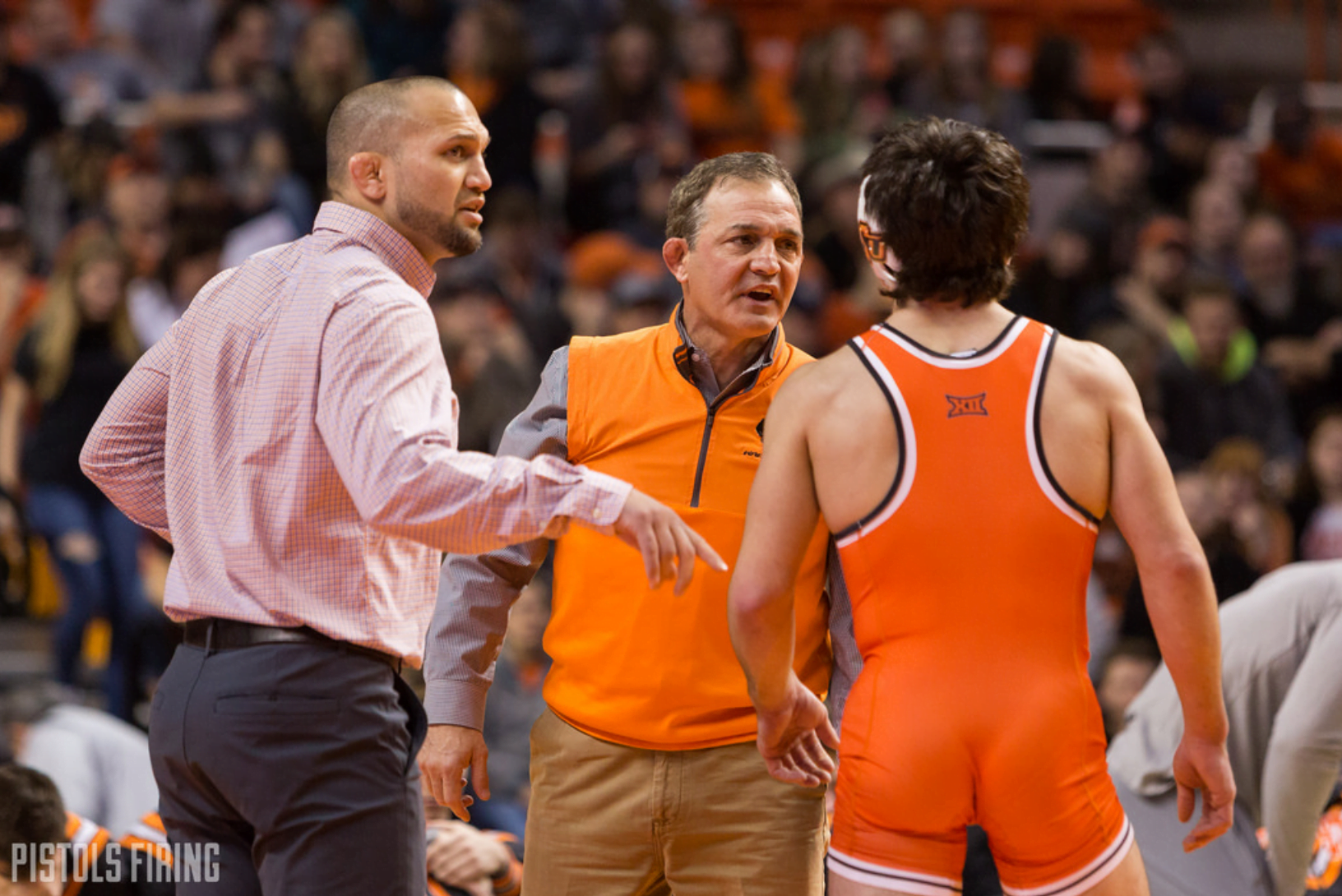 For most programs, a win is a win. For Oklahoma State, how you win is just as important as the result. The fifth-ranked Cowboys won in impressive fashion Friday, throttling Edinboro 34-6 in Gallagher-Iba Arena on Friday night to improve to 11-2. Here’s a look at five takeaways from the dual.

1. Bounce back from uninspired effort

John Smith wasn’t pleased with OSU’s performance last Saturday against Northern Iowa. He pointed to his wrestlers not scoring in the first period and alluded to the fact that it wasn’t entertaining. The dual was broadcast on ESPNU, so he might’ve taken it as a missed opportunity to promote OSU’s brand, as well as the sport of wrestling in general.

Friday was different. Nine OSU wrestlers scored in the first period, and the Cowboys looked more aggressive than they had all season. The Cowboys got pins from Chandler Rogers and Boo Lewallen, and Dean Heil had an impressive tech fall.

“We kinda took the easy road out,” Rogers said. “Me personally, I was on bottom and I was just like, ‘Well, I can’t get out.’ And I just laid there when I should have worked myself out of that position.

“This week we amped up our training and amped up the way that we think.”

Jacobe Smith’s status has been unknown since he suffered what looked to be a left knee injury against Missouri. John Smith previously said Smith shouldn’t miss much time, but he remains out 13 days after the fact. I asked John whether Jacobe’s injury is more significant than he initially thought.

Weigel, meanwhile, was a bit more of a surprise. Weigel didn’t make his season debut until Dec. 18. He won eight of his first nine matches leading into Friday’s dual, but he didn’t weigh in. Andrew Marsden wrestled in his place, taking home a 20-6 major decision.

“He could weigh in Sunday and wrestle,” Smith said. “We’ll see how it goes. That’s the plan. If that doesn’t happen, we could see him next weekend in Fresno. Don’t count him out for Bedlam.”

3. Dean Heil’s birthday present to himself

Heil’s recent slump seems much farther away than it did a week ago. Heil distanced himself from a stretch in which he lost four of seven matches, defeating Edinboro’s Nate Hagan 17-1 on Friday. The match marked the second-most points he’s scored in a bout this season, and it happened on his 23rd birthday. Heil has now won two matches in a row, and he got some props from Smith as he walked out of the mat room Friday. As Heil walked down the stairs of GIA, Smith stopped mid-sentence.

“It was nice to see that guy right there pick up a tech fall.”

Andrew Marsden has wrestled at 184 and 197 this season, but no matter the weight, he continues to put points on the board.

“It’s nice to have a body that can go up and be competitive,” Smith said. “It’s hard sometimes when your No. 2 guy can’t win. I’ve said it all along: Scoring points is really… I respond to that. Regardless of how you’re doing it, I really enjoy scoring points and some guys just struggle doing that.”

Marsden isn’t one of those guys. He has a 14-7 record this season, but a look at how he has won those matches is telling. Half of his wins have come with a pin, and he has three major decisions to go along with two tech falls. He scored at least 10 points in all of his other victories.

Nick Piccininni was the only OSU wrestler to not score in the first period Friday, but he made up for it with a victory against an opponent who had his number.
Edinboro’s Seth Russell had a 2-1 record against Piccininni going into the dual, but a strong performance on top led to a 3-1 victory.

“That was a good match for Nick,” Smith said. “That’s a tough kid. He’s been tough for Nick to score against.”

Russell escaped near the end and almost made something happen, but there wasn’t enough time.

“You just rode him for a minute and 45 seconds,” Smith said. “You got 15 more seconds, come on. He’s gonna have to break a finger to get out. Something like that.”