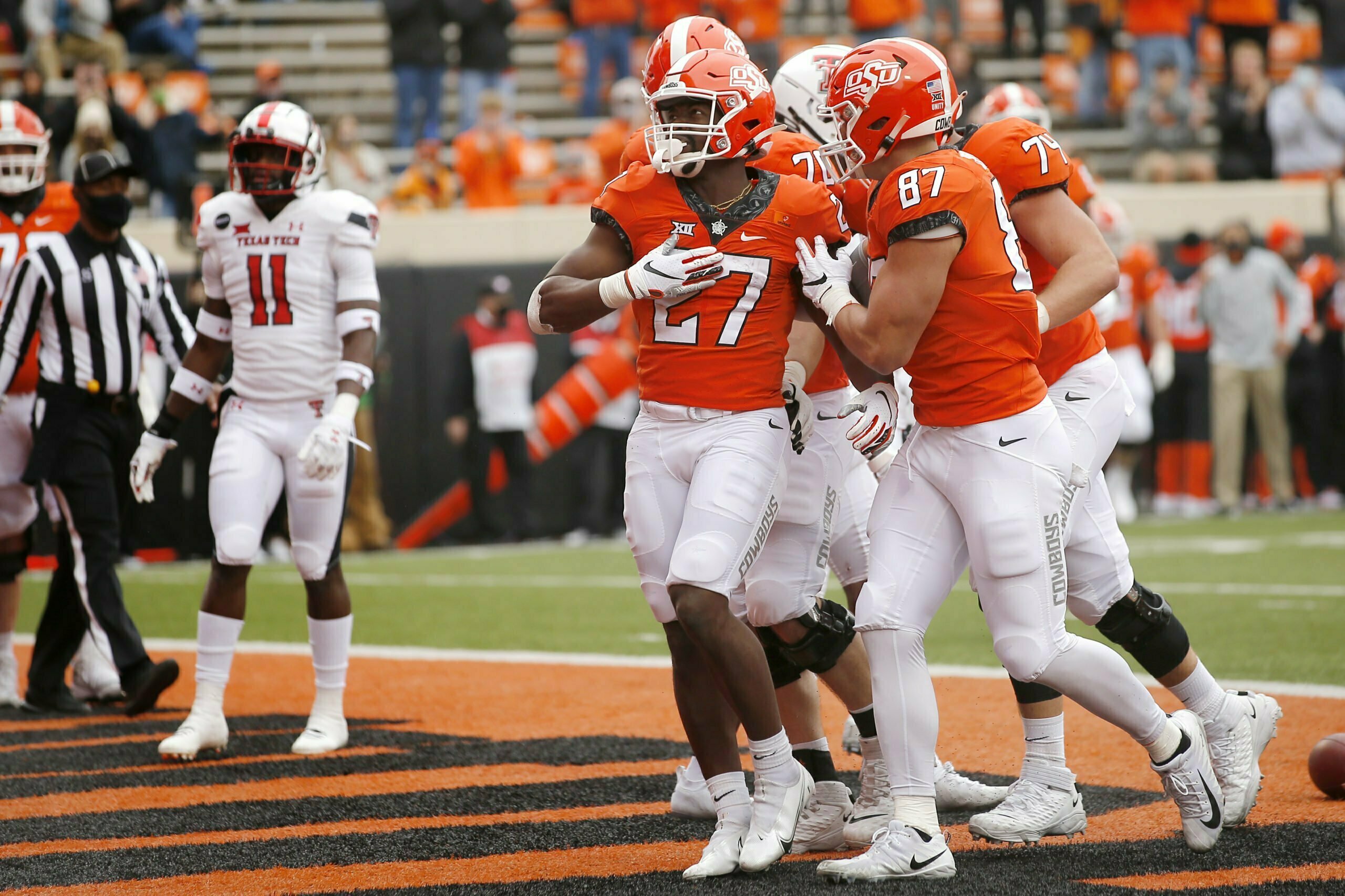 Dezmon Jackson thrust himself into elite company on Saturday. Making his first career start at running back for Oklahoma State in place of injured tailbacks Chuba Hubbard and LD Brown, Jackson rushed for 235 yards on 36 attempts, scoring thrice in what amounted to a coming out party on national television as the Pokes salted away their sixth win of the season.

His 235 yards on the ground were the seventh-most in a game by an OSU running back since 2000, putting him in the record books alongside Chuba Hubbard (twice), Tatum Bell, Vernand Morency (twice) and Kendall Hunter.

So who is this man, anyhow, and how has OSU not been feeding him the rock like candy all season? Here are five things to know to familiarize yourself with the running back that took the lead Saturday as the favorite to earn RB1 shares in 2021.

1. OSU recruited — and landed him — out of junior college

How’s this for a laugh: Dezmon Jackson was the lowest-ranked signee in OSU’s 2019 recruiting class according to 247Sports. And he was far and away the second-most prized recruit at his own position in the class, behind four-star Texas talent Deondrick Glass. Even punter Tom Hutton was ranked ahead of him!

Jackson built up a nice resume at Hutchinson Community College and garnered offers from the likes of OSU, Kansas State, Ohio, Chattanooga and a few others before picking the Pokes three months before signing day in 2018. At Hutch that year, he rushed for 1,352 yards and 14 scores on 184 attempts.

How OSU landed Jackson was remiscent to how OSU landed Chris Carson: Mike Gundy sealed the deal with an in-home visit.

“Coach (Mike) Gundy flew to my house just two days after my visit to have a sit down with my dad being that he wasn’t able to come on the visit in Stillwater due to him having to work,” Jackson told the El Dorado News-Times in 2018.

“It wasn’t a difficult decision because they made me feel so welcomed and showed that they really wanted me.”

Jackson’s experience at the junior college level put him at an advantage to earn a role earlier than others at the position, but a nagging injury — coupled with Chuba Hubbard’s emergence as a Heisman contender — ultimately led him to sit the season in 2019. He played in two games but fell below the four-game threshold required for players to retain redshirt eligibility. His only production came against Baylor when he caught one pass for nine yards.

3. He doubled his career carry, yardage total against Texas Tech

In his 2019 redshirt season, Jackson logged zero carries. In 2020 — before Saturday — he had a total of 18 carries. Then he doubled those touches against Tech, recording 36 rushing attempts (!) and added two catches for 10 yards. His 235 yards rushing more than doubled his season production after entering the day with just 135 career yards rushing.

4. He has a cousin who played for the Baltimore Ravens

The former star in Jackson’s OSU backfield, Justice Hill, now plays for the Baltimore Ravens. But a family member — Kenneth Dixon, Jackson’s cousin — also used to play for the franchise. Dixon was drafted by the Ravens in the fourth round of the NFL Draft as a running back out of Louisiana Tech. He was released from the team in 2019, just shortly after the team drafted Hill in the fourth round of the 2019 draft.

Jackson was rated as a two-star recruit coming out of Parkers Chapel High School in El Dorado, Arkansas. He rushed for 1,602 yards and 21 touchdowns as a senior while averaging 10 yards per carry and earning all-state honors. He then earned NJCAA Honorable Mention All-American honors at Hutch, but still couldn’t break out of his three-star ranking.