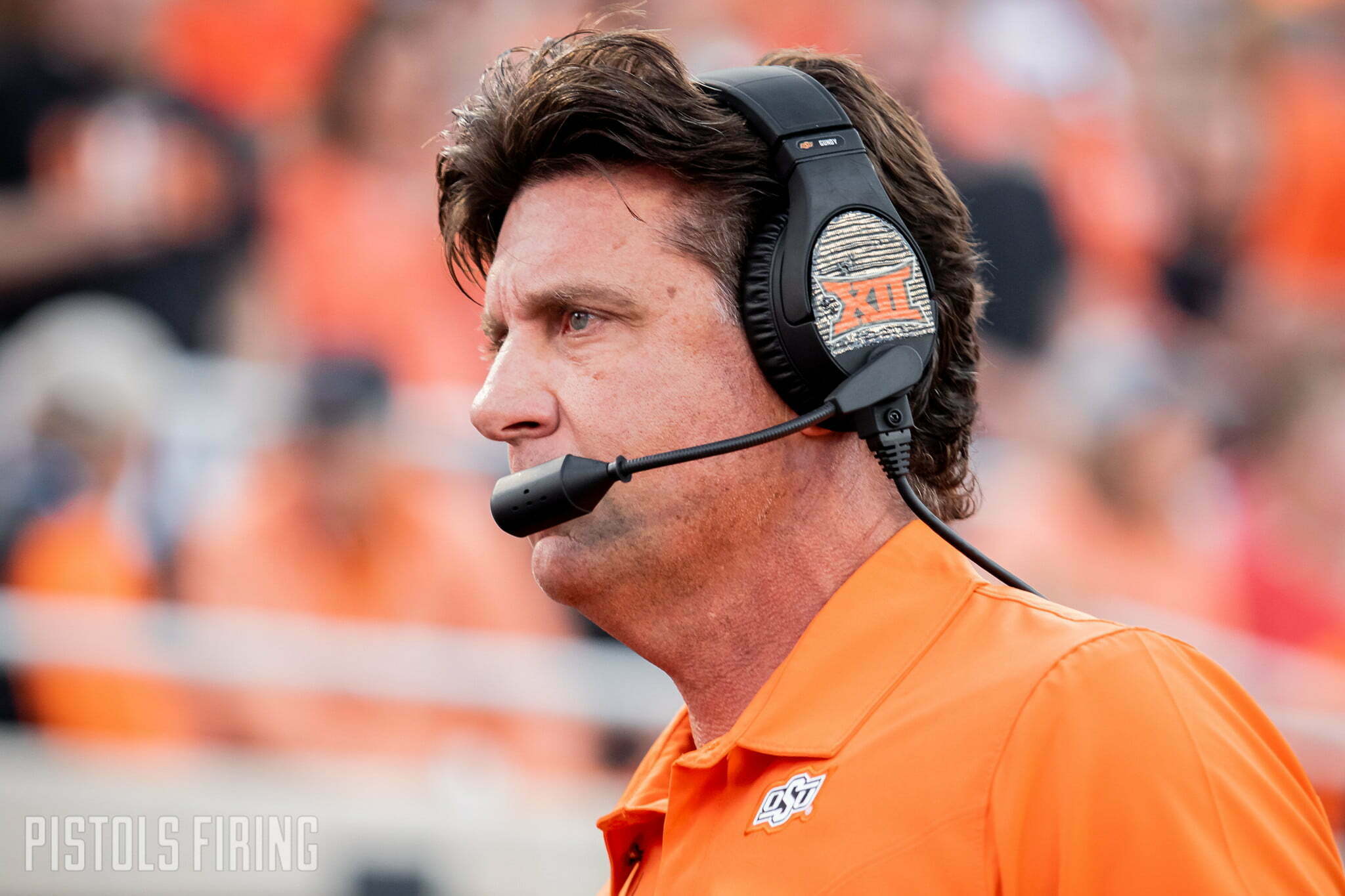 Mike Gundy inked his new deal a few months ago, but the details of his new deal didn’t come out until last week after outlets like The Oklahoman and the Tulsa World obtained a copy of the document via an open records request. After a quick look, here are five things that stuck out to me.

1. It’s Back to a Rolling Five

Gundy first inked a five-year perpetual contract in 2017. But COVID and controversy led to his deal being shortened to a rolling four-year contract and a yearly $1-million pay cut. This new 2021 agreement gives him that extra year back, as well as bumping his pay from $4.375 million for 2021 to $4.875 million. That raise was effective as of July 1, 2021 and the increase was tacked on retroactively.

With Gary Patterson leaving behind a reported $6.125 million gig at TCU, Gundy is the third-highest paid coach in the Big 12, behind Lincoln Riley ($7.857 million) and Steve Sarkisian ($5.45 million). Brent Venables’ new deal at Oklahoma is reportedly worth $7 million annually. If things were to hold, Gundy would potentially be the highest-paid head coach in the new-look Big 12. Private university BYU just inked Kalani Sitake to a new “unprecedented” deal, but reports put it at just $1.5 million annually.

2. It’s Got a Bigger Buyout

Under his previous contract, if OSU were to fire Gundy without cause, the school would owe him roughly $7.1 million to terminate the deal. According to The Oklahoman, that will increase from 50 percent of the remaining contract salary to 62.5 percent on Jan. 1, 2022, or roughly $14.7 million. On Jan. 1, 2023, that buyout increases to 75 percent of his total remaining compensation.

3. It Rewards Gundy at the Height of His Powers

Few could argue that 2021 was one of the most impressive coaching jobs of Gundy’s tenure, and not just because he earned a W over the Sooners.

There were times during the first three weeks of the season that bowl eligibility didn’t look like a given for the Cowboys. Thanks to injury troubles and inefficiency, OSU’s offense struggled to move the ball, but the Cowboys kept finding ways to win.

By the time Gundy inked his deal in October, the Cowboys were 6-0 and about to head off to face Iowa State. The Pokes fell in Ames but rebounded over the latter half of the season, rattling off five-straight wins including his third over Oklahoma to get to the program’s first Big 12 Championship as the No. 1 seed. The Cowboys were this close to a conference crown and a real shot at the CFP.

Defensive coordinator Jim Knowles was poached by Ohio State, but OSU has weathered the hiring away of coordinators before and has even come out the better for it. It remains to be seen how that works out on the defensive side of the ball but, based on his track record, OSU has the right man in the CEO chair.

4. It Further Solidifies OSU in Recruiting

The extra year that’s been added back onto his rolling deal signifies OSU’s confidence in Gundy. And, in an age of constant coaching change, it bolsters Gundy’s confidence when walking into a recruit’s living room.

After he signed the deal in October, Gundy talked about what it means for him as a recruiter and face of the program.

“It allows me to be in homes of recruits and say, ‘I’m going to be here during your time,’ which is what young people want, maybe more so now than ever,” said Gundy. “It gets brought up a lot in recruiting more so than it used to is, ‘Are you going to be the coach?’

“Most young players being recruited now don’t want to be in a position where there could be a potential coaching change. They just don’t want that because they know their position coach is gonna change, their strength coach is going to change. That allows me to say, ‘Listen, I’m going to be here until you graduate.’ That was what the goal was, and so that’s where Dr. (Kayse) Shrum and Chad (Weiberg) and myself came to a conclusion.”

To his point, since signing that deal Gundy inked one the best recruiting classes of his tenure. If you look at 247 Sports’ per-player average, the 2022 class is the best ever at OSU since the service started releasing such rankings.

5. It Kicks Off the Chad Weiberg Era

The contract’s effective date of July 1, 2021 also corresponded with the handing over of Oklahoma State’s athletic department from Mike Holder to Chad Weiberg, as well as the start of the university presidency of Dr. Kayse Shrum who took over for Burns Hargis. This Gundy contract was the first deal negotiated by Weiberg and the first under Shrum’s watch.

Gundy and Holder found a way to escalate OSU football to all-time highs despite not always seeing eye-to-eye. How well Gundy and Weiberg work together will go a long way in defining the latter’s legacy at OSU.