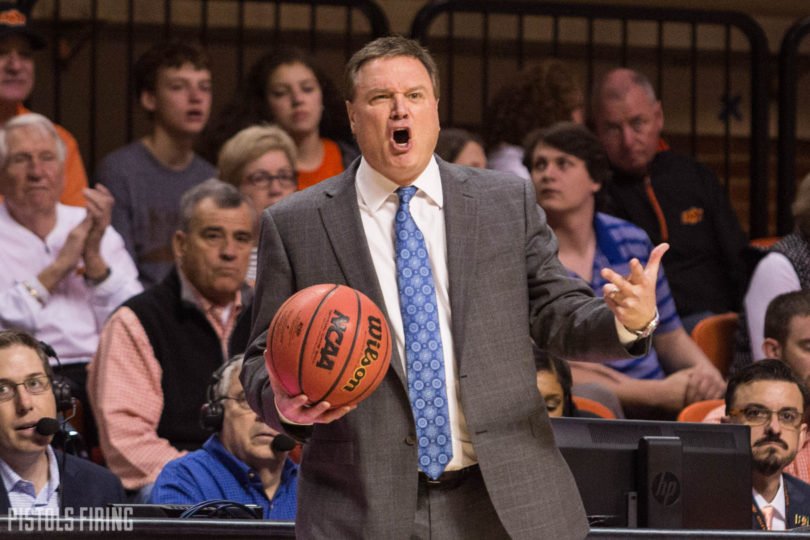 On the heels of its biggest win of the season, Oklahoma State takes on Kansas on Monday in what has historically been one of the most challenging venues to steal a win in league play: Allen Fieldhouse.

Even in a down year, KU has lost just once on its home court. But it has lost five of its last seven and walks into Monday night as a team flailing its way to the finish.

Here are five things to know before the game.

Only one Big 12 team has swept the regular-season series against Kansas since 2001: Oklahoma State. That came in Mike Boynton’s first season (2017-18).

This rocked me to my core when I saw it, but how about this: Oklahoma State’s offense — as difficult as it is to watch sometimes — ranks second in the Big 12 in scoring (76.8 PPG) and in field-goal percentage (46.2%). The offense also leads the league in adjusted tempo, according to KenPom data. So OSU is pushing the pace, scoring at a high level and doing it efficiently. It ranks just 58th nationally in adjusted efficiency at KenPom, but it continues to find ways to score as league play moves forward.

4. Self’s struggles against his alma mater

Bill Self is inarguably the most accomplished coach in the Big 12. But against his alma mater, OSU, he has struggled. Kansas under Self’s coaching is 22-14 against the Pokes, with a 6-10 record coming inside Gallagher-Iba Arena. Since 2008 OSU has defeated Kansas a grand total of nine times.

A former OSU recruiting target, David McCormack blasted Oklahoma State in the first meeting between these two teams last month, posting a season-high 24 points in the loss. It was the highest scoring total of his career in a Big 12 game, and his 12 rebounds were a career-best in a conference game, too.

In the last meeting, Kalib Boone played just 16 minutes, Bernard Kouma played four minutes and the team struggled to contain the physical 6-foot-10 big man. But Boone is coming off his best performance of the season, and Kouma’s role has increased in games OSU needed him. Matthew-Alexander Moncrieffe is dealing with a foot injury, and his status is unknown entering Monday night. It may be a team effort to trap and contain McCormack, but that’s a specific area of the game to watch after the way McCormack played against OSU in the first meeting.