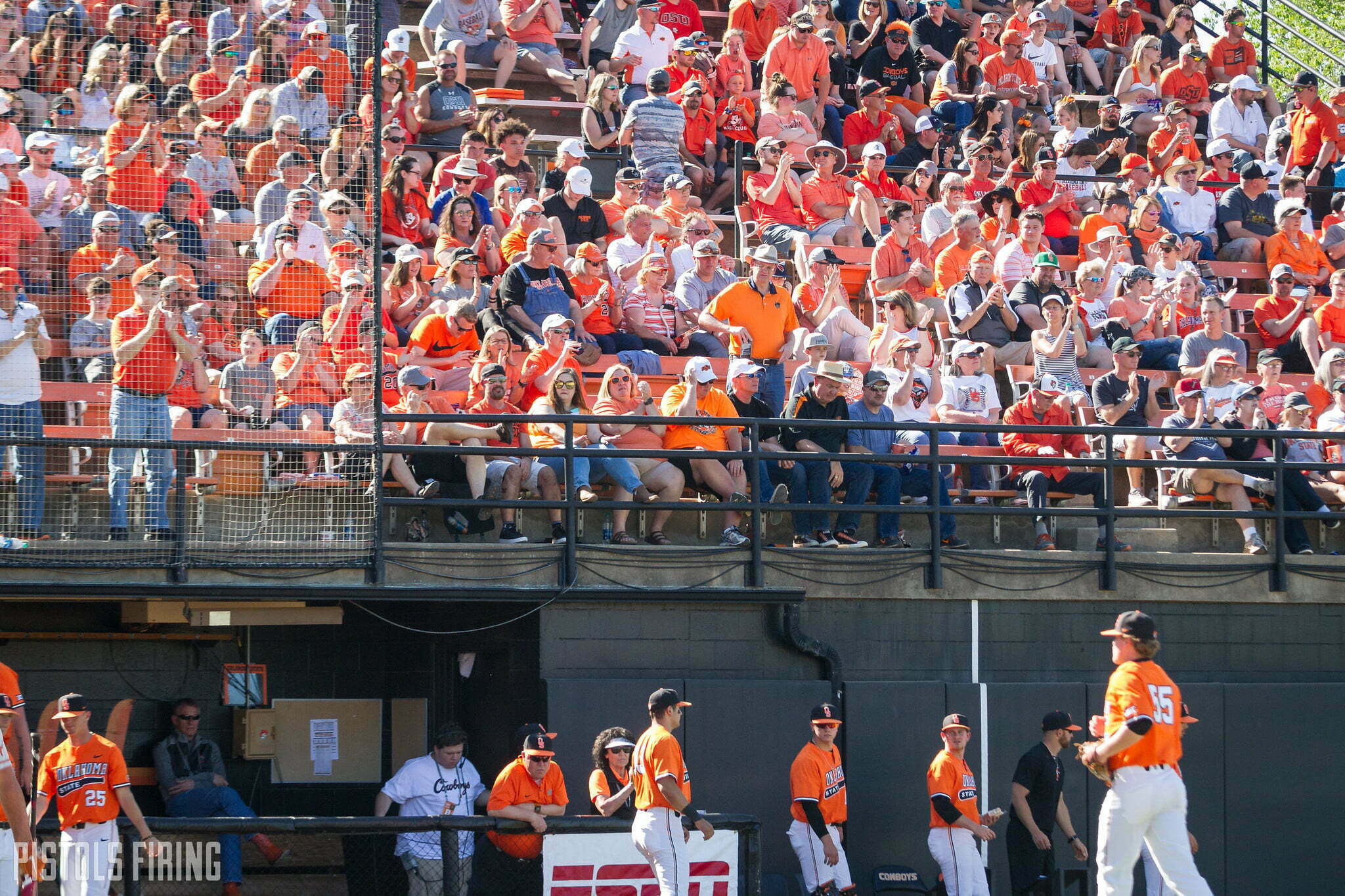 STILLWATER — Here was my view for a fine, 82-degree Stillwater evening.

What a night it was, as the OSU softball team defeated BYU 3-1 in the first round of the Cowgirls’ NCAA Regional, and the OSU baseball team thumped Big 12-leading Baylor 16-4 just a few feet away.

With my head whipping back and forth between games, here are five thoughts from a pretty cool night in Stillwater.

With the Cowgirls hosting an NCAA Regional for the first time in 7,670 days, and the Cowboys playing their final regular season series in Allie P. Reynolds Stadium, all the nice things people say about Stillwater were well on display.

It was a family affair. It felt more like one big festival instead of two separate ball games.

“It was awesome today,” OSU softball coach Kenny Gajewski said. “There was one moment where something happened and all the fans in right field that could see the baseball field were going crazy, and nothing had happened (at the softball field). I was like, ‘What in the world?’ then I was like, ‘Oh, baseball must’ve just scored again.’ It was really cool to hear it go back and forth.

“This is what college sports are all about. It’s what a Thursday or Friday night is all about. This is what makes Stillwater great is the way our people can come out and support us.”

There were two gentlemen sitting in front of me who also kept swinging their heads between the fields. At one point one asked the other, “Is there any place in the world you’d rather be?”

The OSU softball team sprints to every foul ball.

I was told it was because at one point in the year, Gajewski got on to them for not hustling, so now, somewhat sarcastically, players nearly knock each other over trying to retrieve a clearly foul ball.

The squad is also can get quite aggressive with its chants. Whether it’s shouting, “We’re gonna beat the hell out of you!” across the field at the end of “The Hey Song” or asking an opposing pitcher how many balls she plans on throwing, it can definitely raise a few eyebrows.

Some of the Cowgirls’ fun is looked at sourly by outsiders, mainly Show’s primal bat flips, but it looks all in fun.

“I think this team genuinely can’t wait to get to the field each day,” Gajewski said. “Some of the stuff that comes out of our dugout and their chants makes me shake my head at times, but it’s just fun. It’s fun to be around them.”

3. The Cowboys are Smoking Baseballs

When I was watching the softball game, I would here a loud PING behind me.

Often times I would turn around to see Baylor left fielder Mack Mueller sprinting toward me in pursuit of a baseball. At that point, I was just hoping the net separating the two ballparks would catch the small white sphere before it found my face.

The Cowboys hit four home runs Thursday night. Two of those round-trippers used the stiff Stillwater breeze to get out over the left-field wall, including Colin Simpson’s third-inning grand slam.

“I got ahead in the count,” Simpson said. “I got into a good hitter’s count, and I just told myself, I was going to look for one pitch and one pitch only, and that pitch ended up showing up, so I took a swing. I think I had a little help from the wind. I was running down the first-base line yelling at the wind to blow harder. I think it blew a little harder when it got up in the air for me.”

The Cowboys are up to 75 home runs this season. That’s the most OSU has hit since 2009 when they had 81 bombs. The program record of 154 bombs set in 1988 probably isn’t in any danger, but regardless balls are flying out of the ballpark.

4. Kiley Naomi Is and Will Be A Problem for Opposing Hitters

Apart from a first-inning throwing error, true freshman shortstop Kiley Naomi was a menace to the BYU offense Thursday.

Naomi had one putout and five assists against the Cougars including a sick double play.

Naomi, from Maurice, Louisiana, has 79 putouts and 113 assists on the season, and though her play at the plate is still coming along, she still has three more years after this season to continue to wow with her defensive abilities.

Here’s what she had to say before the series about if she ever surprises herself with some of the things she can do:

Joe Lienhard got the start Thursday for the Cowboys’ series opener against Baylor despite not having started a game since April 13.

It worked out well, as Lienhard went a season-long six innings allowing four runs off seven hits while striking out seven. That coupled with the 15 piece of run support the Cowboys provided in the first five innings set Lienhard up for his third victory of the season of four decisions.

Mitchell Stone came on in relief after not having pitched since April 10. After beginning this season as a starter, Stone fell completely out of the rotation, but OSU coach Josh Holliday said Stone has stayed positive and worked his way back in.

“He’s worked his tail off, and he’s done so with a great attitude,” Holliday said. “Just a really impressive, mature approach to working at his craft and making adjustments and being coachable. All the things in coaching you want to see out of your players, but even more exciting when he turns around and it comes back around for him. It’s awesome.”

Stone, only a redshirt freshman after breaking an ankle kept him out almost all of 2018, threw three innings where he allowed only one hit Thursday night.

Holliday said the decision to start Lienhard was to give Jensen Elliott, who normally starts series-opening games, a full week’s rest with this series getting bumped to a Thursday start.