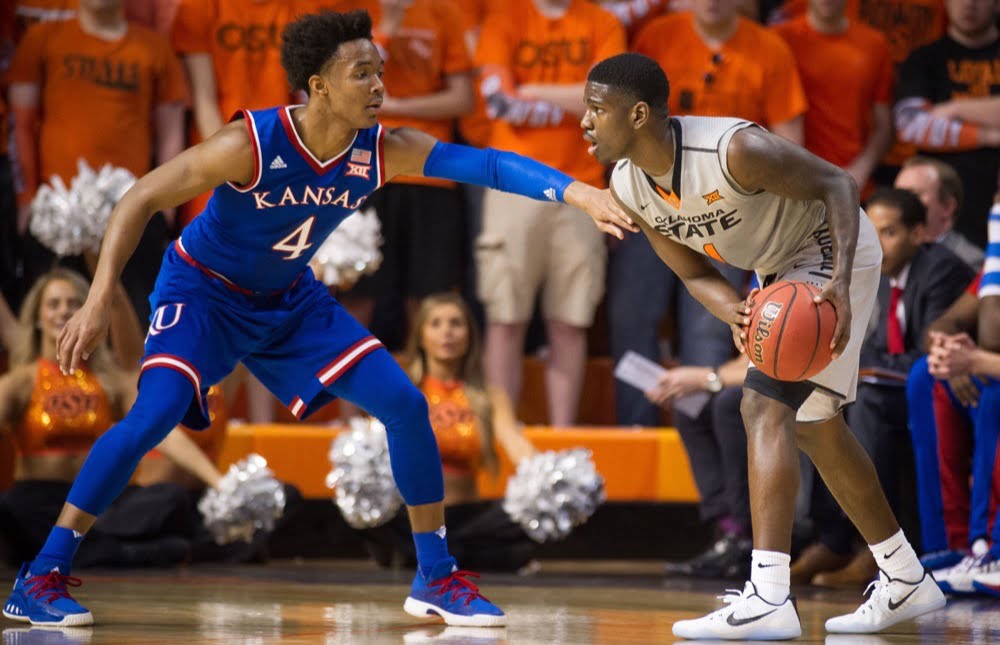 Oklahoma State and Kansas traded heavy haymakers in GIA’s swan song this school year as the Jayhawks beat the Cowboys 90 to 85 in an emotional night in the house that Mr. Iba built. Bill Self summed it up best when he met Brad Underwood at mid-court after the frenetic game.

Kansas picked up its first win at GIA since 2013 (not a typo) as Jawun Evans finished with 22 points, 4 rebounds and a career-high 15 assists. Frank Mason matched him with 27 points, 8 rebounds and 9 assists.

It was a monumental point guard matchup. The ghosts of Mo Baker and Kirk Hinrich would have approved of those two going at it for 72 combined minutes on Saturday night.

For the Cowboys, Jeffrey Carroll tossed in 27 points on 5-11 from 3-point range, Phil Forte had 13 and Leyton Hammonds had 10 in his final game in the Old Barn. It wasn’t enough, though, as OSU led for just 33 seconds over a wild two hours.

Five thoughts on the festivities.

The first half was a track meet that featured either two of the best offensive teams in Big 12 history or Pro Bowl-like defense from both sides, I’m still not sure which. The second started even quicker.

It felt like if the Cowboys could keep it close until the five-minute mark then GIA could grab a venti and shut down a fourth straight at home against KU. Alas, Kansas would not stop coming, and OSU didn’t have the goods late.

It felt like OSU started launching threes a little bit too early when it trailed down the stretch. OSU has trailed in a lot of games of late, but it has always trusted in its offense to climb back in it all the way up until the clock hit 0:00.

On Saturday, OSU shot seven threes in the last six minutes and took 36 (!) threes overall. It had only shot over 26 twice this year (33 against WVU and 31 against Iowa State). Taking 36 threes at home against the No. 1 team in the nation felt a little too panicky for my liking.

Still, they stayed in it until the very end, and Kansas could not put them away until the final seconds. Related: I’m pretty sure we just watched the most exciting 9-9 season in Big 12 history.

You’ll never convince me otherwise. I didn’t watch every game every other team in the Big 12 played, but it’s difficult to imagine a wing in the Big 12 being more consistently awesome than Carroll was this year.

He might not make the All-Big 12 team (actually, he probably won’t), but he is an All-Big 12 First Team player. His career high of 27 came on just 17 shots, and he was OSU’s only reliable threat from 3-point range (Evans, Hammonds and Forte were a combined 6-20).

He has been spectacular all season, but on a night when stars shined all over the court, Carroll rolled with some of the best players in the country for Kansas. He was not out-matched. He was not out of place. He will likely be the centerpiece for Underwood next year.

3. Jawun-Fran Mason was a war

Let me write this down in case you’ve had a few too many COOPs and don’t feel like doing the #Math. Jawun Evans and Frank Mason combined for the following:

I sure as hell don't want to face a team that has a better one https://t.co/NmOs6fz8ju

Of Oklahoma State’s 30 FGs made on Saturday night, Evans assisted on or scored 22 of them. And he did so with the best team in the country knowing what was coming on every possession. He’s special, tonight was incredible and I hope that’s not the last we’ve seen of him in GIA (although it probably is).

This was sick. Jawun is incredible. pic.twitter.com/NVKvVd99Yd

4. You Have to get stops

Oklahoma State could not get them down the stretch. They just couldn’t. Their defense was not disciplined nor intense, and Kansas just out-manned them. Kansas hit seven of its last 10 shots and closed like Big 12 champs are supposed to close.

The Jayhawks turned it over on 17 percent of possessions (which is a lot) but still averaged 1.24 points per possession (which would rank top five in the country on the year). One reason is that OSU only grabbed 60 percent of available defensive rebounds. That’s not very good.

At times OSU was feisty (see GIF below), but Eddie Sutton must have been calling for the shoulder pads and face masks from his wheelchair after watching Self’s team shoot 56 percent (!) in GIA on senior night.

5. Who Wants OSU in the Tournament?

OK, maybe North Carolina doesn’t care, but this team is not going to be very fun to put away here over the next few weeks. Carson pointed this out in our postgame show, but OSU doesn’t really get blown out anymore. This is what happens when you have one of the five best offenses in the country for the season.

On the flip side of that, they have to be better on defense. They finished the year averaging 1.15 points per possession on offense but giving up 1.13. The former number is No. 1 in the Big 12 (by far) and the latter is last (also by far).

That might win you a game or two in March, but it’s not going to win any championships (Big 12 or otherwise).

That’s a long-term problem, though, that Underwood has to address in the offseason. In the meantime, we can enjoy being the basketball version of a pretty good Texas Tech football team and pray OSU doesn’t face a front court with an average height over, uh, 6’5 in the first round.

Next game: Oklahoma State-Iowa State in Round 2 of the Big 12 Tournament at 11:30 a.m. next Thursday.