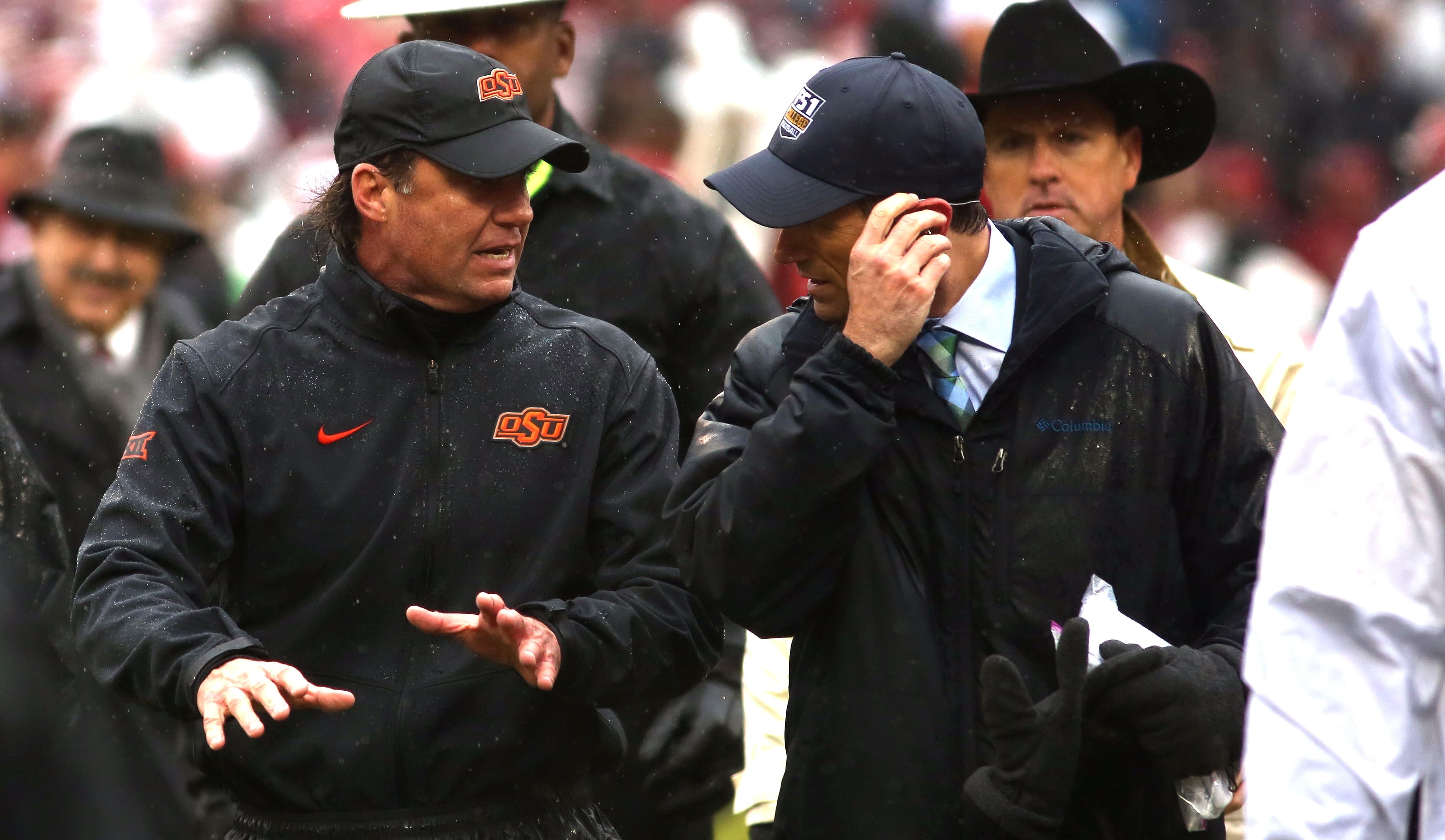 I’m sorry this is so tardy, but I was out this week as we had our third kid. I had a loooooot of time in the hospital and in the middle of the night to think about Mike Gundy, Baylor and the future of Oklahoma State football. Here is what I came up with.

Here is what I believe about what happened last week: If Mike Gundy did not want the news of him holding hands with Baylor to be made public, it would not have been made public. Did you notice the three loudest OSU-specific voices on Gundy’s supposed visit to Waco? Pat Jones, Robert Allen and Jim Traber.

Pat Jones said Gundy showed him how much Baylor allegedly offered (10 years, $60 million). Gundy is not stupid. He knows Jones talks on the radio. He also had the chance to tell him it was off the record. Same for Allen. Those were the first two people who sent the test balloon. This is not difficult to parse through. This was on purpose. I’m not breaking any news by saying that. If it was Bill Haisten or Mark Cooper or Kyle Fredrickson who first reported it, I would empathize with Gundy’s inability to maintain some privacy. But not like this.

So it’s clear Gundy wanted all of it out there. My question is, uh, why? You’re just coming off a brain-thumping by your in-state rival for the conference championship in a game on a day in which most of your decisions were questioned by all but the most irrational Gundy supporter.

This would be like me filing an incoherent 800-word piece about the 2017 Masters for CBSSports.com and then the next week making it (very) public that I was interested in jumping to ESPN.com for more money. I can do that, of course, but what am I trying to accomplish? It makes me look foolish and like I have no grip on reality. Should I not listen to ESPN.com because I flailed in my Masters piece? No, that’s not what I’m saying. But I definitely should have:

Here’s the thing. I think if Gundy was actually serious about leaving OSU then this story would not have been leaked (by him). But because it was leaked, I have to believe he wasn’t serious and was just trying to either goad his bosses (silly) or use it as leverage (he just got a contract extension last year, and there are better ways to go about doing so again).

This is not endearing, and with a 2-10 record against OU, “endearing” is one of the only things Gundy has going for him this time of year.

2. But he does have slack in the line

I wrote about this on Monday, but Gundy knows OSU isn’t going to pay him (at least) $7 million to go away so he can kind of do whatever he wants. It’s crappy that he takes advantage of this (and completely silly — when is the last time Bob Stoops legitimately flirted with another school?) but he understands the economics of it.

As an aside: He does not however understand the economics of what it takes for a lesser entity (OSU) to defeat a greater entity (OU) in an annual football game (i.e. take a risk). Someone leave directions to the Spears School of Business on his desk. I’m sure one of the professors over there would be happy to give a pro bono lecture.

Anyway, part of me thinks Gundy just does this every December to irk Mike Holder and Boone Pickens. Like, he just has a bunch of stuff floated out there until he gets a groveling text from somebody in a office at the top of Gallagher-Iba Arena telling him to stop and that yes, of course he can have a mullet-specific hairdresser brought in part-time to the barber shop inside of Boone Pickens Stadium.

3. Baylor has an overinflated view of itself

Jason King is a Bleacher Report writer who roots for and reports on Baylor. I have no issue with the former. I am a CBS Sports writer who roots for Oklahoma State. That is not a problem. My point in this is, however, that as a journalist you usually represent the more conservative, rational end of your fan base. And yet …

Baylor search reminds me of presidential election. Twitter know-it-alls laughing at the mention of big-time names are about to look stupid

Oh it's true. Fedora was never interviewed and Gundy was still in play/waffling; never told them 'no' https://t.co/lCwclYoYnB

This is supposed to be a rational voice for Baylor! Were Nick Saban and Urban Meyer just too busy with the playoff to interview?!

All of these things might be true, of course (although I’m not sure Matt Rhule is a “big boy”), but I find them very, very difficult to believe. Larry Fedora played for a conference title last year. Gundy played for one the last two years.

Oklahoma State and North Carolina may or may not be better jobs than Baylor (they certainly are right now), but even if they aren’t, it is close enough that making this move would be lateral at best. So Fedora and Gundy are going to laterally jump ship for the No. 147-ranked recruiting class in the country? Mmmmm okay.

I don’t know if Mike Gundy was or was not offered $60 million to coach Baylor. I presume, though, that Gundy has been offered more money (either formally or informally) to coach at somewhere other than Oklahoma State at some point in the last five years.

Jim Traber says that Mike Gundy turned down a 10-year, $60 million contract from Baylor. Says Oregon could be in play for Gundy.

That would mean that Gundy has turned down that money, and there is a specific reason for that.

Gundy is almost 50. He, maybe more than any other coach in the country, knows how difficult it is to turn the ship of a floundering program and make it awesome. It’s hard. It takes a ton of time and effort — two things Gundy doesn’t necessarily want to give.

This is not 37-year-old Gundy who could bang out 15-hour days and draw up plays on his Big Chief pad until all hours of the night. He has other interests. He wants to hunt. He wants to watch his kids play ball. He doesn’t want to, for example, go on a national remorse tour explaining why there will not be any more sexual assaults in Waco from here on out.

He really only has one problem to solve in Stillwater: Beat OU. Everything else has either been taken care of or is being taken care of. Every other issue he has stems from that one. You go somewhere else and you have 1,000 problems you’re not familiar with and you don’t know how to solve. I don’t really think Gundy has time or wants to make time for that. He will be in Stillwater for many more years.

I was thinking about this as all this was going on: Are we sure OSU is a stepping stone job? I made the case pretty hard earlier this year, but I’m not totally sure that’s true anymore. You can win conference titles in Stillwater. You have the facilities. You will get paid. You have so many resources. The only downside, literally the only downside, is location.

The thing that got me thinking about this is thinking about whether Baylor and Oregon are definitively better positions than Oklahoma State. Baylor is not. Oregon probably is depending on what you value. ESPN ranked the CFB jobs at the beginning of the year. Oregon was No. 13. Baylor No. 22. OSU was No. 30. But part of me wonders if second- or third-tier jobs like OSU have become like Wichita State in basketball.

WSU coach Gregg Marshall famously said a few years ago that you can eat a lot of steak with the money he’s making.

“I’m already making seven figures,” Marshall told CBS Sports. “You can eat a lot of steak and hamburger and pizza for what we’re making at Wichita State . … I live on the golf course. We have a beautiful backyard. My wife has four dogs. She gardens. We fly around on private planes to Napa and back to South Carolina. We have a good life, man.”

Gundy has a good life, too. What is the point of going somewhere else? What are you trying to accomplish? You can win conference titles in Stillwater. You have one problem to solve. You’re six inches from playing for a national championship.

Look, I’m in the bag for Gundy. I am fully intoxicated on 9- and 10-win seasons and playing in awesome bowl games every year with the occasional Big 12 title to boot. I know this is going to sound insane, but I think having a top 12 program nationally over the last decade is really good.

I think getting stroked by your rival with a trophy on the line and waltzing off to flirt with a school that itself is flirting with short-term irrelevancy is as petulant as it gets. You have one boss to please. You have one booster to placate. You can buy part of John Deere (the company, not the tractor). You have it good.

Gundy predictably dodged the questions about his fidelity to Stillwater at the end of last week. “As everybody knows, I’m fully committed to Oklahoma State,” Gundy said on Thursday.

Actually I’m not sure everyone does know that, Mike.

“[My players] know me really well and they know that if there is ever anything that they need, information, that I’m going to give it to them first. And they have never come to me about any of those situations or things that they hear, just from the relationship that I have with them. So, I don’t really see the need to address it and I don’t think they give it a second thought to be honest with you.”

For the first time during last week’s fiasco I came to the realization that Oklahoma State football will still be pretty good when Gundy leaves as long as it gets the right coach. This is a Bryan Curtis special. He wrote recently about Charlie Strong and Texas.

Here’s my theory of college football: There aren’t great programs. There are only great coaches. I know this because I spent most of my childhood watching crappy Texas football teams. They got better when Brown was hired during my junior year at UT.

When Brown’s spell wore off, Texas sunk back to a spot in the pecking order behind Texas A&M and Houston, plus Baylor and TCU. This was treated as a historical quirk; in fact, it was a restoration of the Reagan-era prime of the Southwest Conference. Magical thinking about indomitable programs is rampant across college football. [Ringer]

His annual tour de Power 5 is not only getting stale, it’s getting tiring. So while last week’s move will be viewed by some as Gundy’s latest power play in a career full of them, I take the opposite view. Gundy has been a stronghold for Cowboy football for over a decade now, but I don’t think it gets any weaker than this.