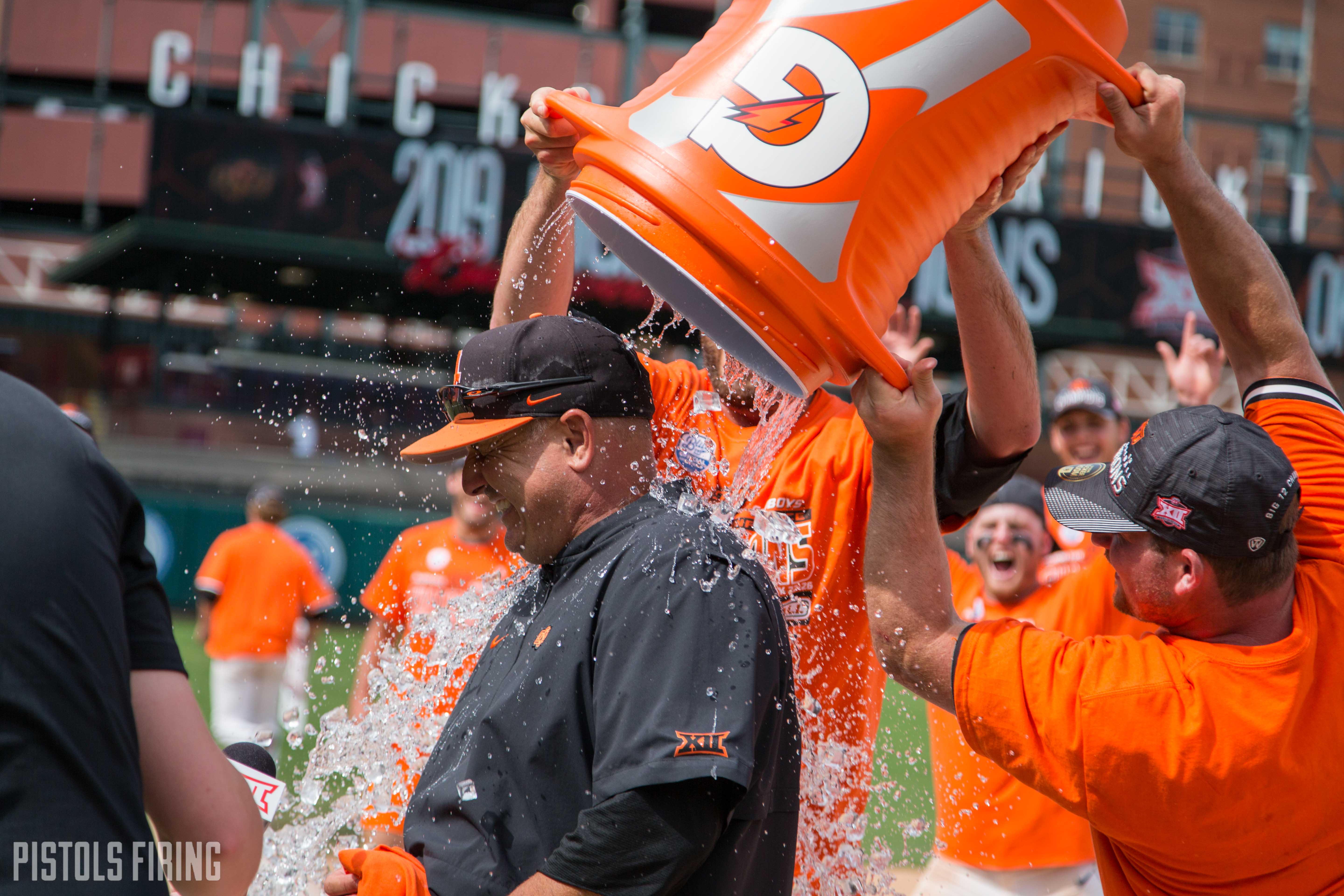 OKLAHOMA CITY — For the second time in three years, the Cowboys are Big 12 Tournament Champions.

The Oklahoma State baseball team defeated West Virginia 5-2 in Sunday’s championship game after beating TCU 7-6 in extra innings just a few hours earlier. The Cowboys played five games this weekend, only dropping one, and will now wait their fate in terms of postseason play.

Here are five thoughts from a long weekend at Bricktown Ballpark.

They call OSU pitching coach Rob Walton the wizard, and he pulled off his magic again.

Despite having to play an extra game after losing to TCU on Saturday, Walton stuck to his guns and held Brett Standlee to start the tournament’s championship game, not sure if OSU would make it. And Standlee, a redshirt freshman, delivered, throwing seven innings where he allowed one run off seven hits.

“We wanted to play it smart,” OSU coach Josh Holliday said. “We planned out what we thought was our best strategy to win (Sunday’s first game). We had some fresh arms. We used them in order. … We knew if we got to the finals, someone would have to step up. We just said that point blank, ‘Someone’s gonna step up. That’s it,’ and Brett did.”

Walton used 13 pitchers before the championship game, including using three guys (Logan Gragg, Ben Leeper and Peyton Battenfield) twice, but he kept the guy who started the past eight Sundays OSU has played for Sunday’s most important game.

“Couldn’t have scripted it out probably any better,” Holliday said. “I thought Coach Walton did an amazing job. He’s a crazy-good pitch caller. His strategy and the impact he’s had on our program the last seven years is immeasurable.”

Colin Simpson fended off teammate Andrew Navigato for the tournament’s most outstanding player, and it was a well-deserved honor.

The crowd roared when Simpson got to the plate in the bottom of the fifth with the bases loaded and two outs against West Virginia. The Cowboys were down a run at the time, and it seemed the perfect time for the man they call Tank to belt a ball to the lawn in center field, but he showed patience and watched four straight balls, drawing a walk to tie the game at 1.

“The kid couldn’t really find the strike zone,” Simpson said. “So, I just stood there and watched the ball go by four times, and that was it.”

Simpson said last weekend that he had a fracture in his left wrist, but it was what he called a pain-tolerance injury. A concern with that was catching with all the impact that wrist takes. Sunday, though, Simpson was crouched behind home plate for 19 innings. Bryce Carter, the Cowboys’ other catcher, seemed to get banged up Saturday, so Holliday had to go to his senior.

“Colin is the heart and soul of this team,” Holliday said. “He’s the heartbeat. … This in many ways is Colin’s team.

“We’re not here without him. His leadership and the impact he’s had on other kids, he’s a special kid.”

At 7:30 p.m. Sunday night, the NCAA will announce the 16 regional hosts for next weekend. OSU is a near-certain lock to be one of those 16, but if the Cowboys can land in the Top 8, they would play games at Allie P. Reynolds Stadium up to the College World Series.

The Cowboys entered Sunday ranked eighth in the RPI. Now at 35-18, OSU is the only Top-10 RPI team without at least 40 wins, but no one in the Big 12 has reached that mark.

I don’t consider myself an expert on the national scope of college baseball, so I defer to D1Baseball’s Kendall Rogers:

We will deliberate this later today, but @OSUBaseball is a Top 8 national seed for me. Incredible past month for @joshhollidayosu and the #Pokes. https://t.co/47wlpgZOTa

Rogers also tweeted that it would be hard to convince himself that OSU would be seeded ahead of Texas Tech, who won the Big 12 regular season title and swept OSU, but he said to him, both of those Big 12 schools are Top-8 seeds.

“Being able to sleep in your own bed is one of the best things ever,” Simpson said. “I like hotels, but after about a week, I really just want to go back to my own bed.

“It would be incredible to have that fanbase behind us. Our fans are incredible. They travel. They follow us. So, to be at home and be in front of all of those fans, it would be big. It would be a lot momentum. Hopefully we get that national seed and we can host a regional and a super.”

4. This Thing Needs To Be Scheduled Better

The only games that were on schedule in this tournament were the games played at the beginning of the days.

The crazy part is that the weather honestly wasn’t too big an issue this weekend apart from Saturday night. I understand that baseball is a game without a clock and thus it can be tough to tell how long a game with last, but this whole weekend got a bit ridiculous.

I got back to Stillwater about 2:15 a.m. after Wednesday’s game and about 2:45 a.m. after Thursday’s. That’s probably about an hour longer than it would take the average fan because I have to go to the news conferences and write, but still, how are people expected to be at baseball game’s that late on weeknights?

It looked as if OSU was going to have to start a game well into the 10 o’clock hour Saturday night before Mother Nature put a stop to that. That would’ve been ridiculous, as the winning team would’ve had to play until about 2 a.m., shower, sleep and be back at the field for the 1 p.m. championship game.

I’m not sure I have the correct answer to fix it. Is it making the tournament single elimination, thus having less games? Is it playing at two fields then meeting somewhere for the championship? I’m not sure.

5. This Team Is a Scary One to Play

After three innings in the championship game, OSU had no hits and had struck out seven times.

That’s definitely not great, but thanks to great pitching and defense, the Pokes were only down 1-0 after that. Then boom, a three-run fifth inning and a two-run eighth. The Cowboys are a team that often score in bunches.

This team is not afraid to swing the bat, evident by their league-leading 84 home runs. But they’re also not afraid to strike out, and that can almost be just as scary. It’s like going to war with someone who has no fear of death.

When the Cowboys are on offense it’s often a street fight instead of a boxing match. The OSU batters are going to take some major hacks, and all it takes is one to land to change the game. It’s a fun brand of baseball to watch.