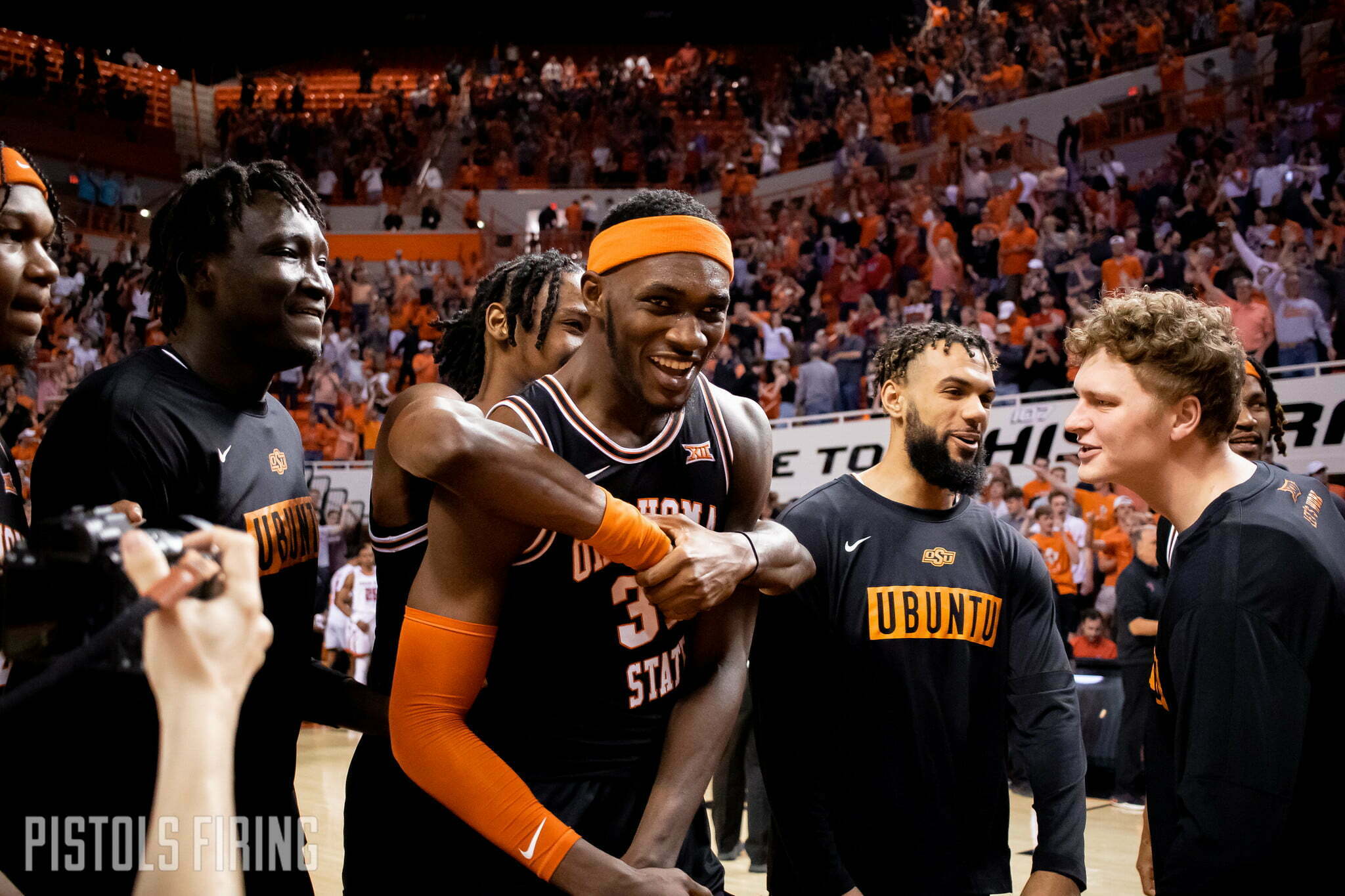 STILLWATER — The Cowboys fought to the end of a season that, on the national stage, had little importance to it.

Oklahoma State defeated Texas Tech 52-51 on Saturday in Gallagher-Iba Arena to put an end to the Pokes’ banned 2021-22 season. Here are five thoughts from Saturday that had little to do with basketball.

There have been two basketball games that have gotten away from the Cowboys this season — in Lubbock and in Lawrence.

It hasn’t always been beautiful basketball, but OSU fought despite this season being a wash. The last five games of OSU’s 2021-22 season best represent that. The Cowboys played back-to-back-to-back overtime games, they beat Iowa State in Hilton Coliseum and then they clawed out a win against a Top 15 Texas Tech squad.

It’s a shame this team won’t get to go to Kansas City and continue the fight.

Are the Cowboys an NCAA Tournament team? Probably not as things stand. OSU is 15-15. The Cowboys entered Saturday ranked 50th in the NET ranking. They’d need to win at least a game in Kansas City, but they aren’t even afforded that shot.

Kansas is the only team that swept that swept the Cowboys in conference play this year. Going through the tiebreakers is pointless, but OSU finished the year in a tie for fifth in the conference. The Pokes would enter Kansas City with a shot, but it’s a shame the road just ends here.

Going into this year, a lot of OSU fans would probably be fine with finishing fifth in the Big 12.

The 8-10 league record is respectable given the conference is as deep as OSU’s 2017 receiving corps. The 15-15 record is less sexy, and there were points along the way when things didn’t look great (a loss to Oakland, Lubbock, that second half in Florida).

But, the Big 12’s coaches picked OSU to end the year in a tie for fifth, and the Cowboys ended in a tie for fifth. Given the questions on motivation throughout the year (and the fact that OSU stunk from 3-point range), that’s not too shabby.

Mike Boynton will likely have to do some recruiting this offseason.

Five-star guard Anthony Black is still out there. Boynton said other programs are already recruiting guys off his roster. But perhaps the biggest fish Boynton could get back is Moussa Cisse.

Cisse went deep in the NBA Draft process last year before deciding to return to college basketball and do so at Oklahoma State.

Cisse started the season as a raw, long, athletic 7-footer. That’s a heck of a start, and he grew this season in Stillwater, particularly late. At the end of January, Cisse was averaging 5.9 points and 5.6 rebounds a game. He finished averaging 7.2 points and 6.5 boards a game. He had double-digit rebounds in six of his last seven games, and he had double-doubles in three of those games.

He is far from a finished product. He went from a rare to a medium in burger terms. But he is still young. This should’ve been his freshman season of college ball because he reclassified to get to Memphis a year early. Boynton has said for a while that Cisse’s best basketball is still in front of him, but will OSU be in front of him next season?

Someone, somewhere will undoubtedly pay a 7-foot athletic anomaly with a 7-6 wingspan money to play basketball — at what level that would be is the real question.

On Thursday, Cisse told the media he has a decision to make about it. He recognized he still needs to improve on the offensive end. He did, though, say that if he does come back to school, it’ll be at Oklahoma State.

“I feel like it’s a great fit for me,” Cisse said. “Everybody around here, the love is incredible, fan support. The coaches, teammates, everybody, I learned a lot. The team really made me a better person, to be honest. When I say a better person, like how I carry myself, being motivated every time. Stillwater helped me a lot. I don’t think I’m going anywhere aside from here if I decide to come back.”

The headline-worthy part of the OSU basketball program’s sanctions is over. The Cowboys played a season and didn’t have a shot at the postseason.

But there are still hurdles and hoops Boynton and his staff have to jump over and step through. The program will still lose three scholarships, be under probation and have a handful of special recruiting rules Boynton has to follow. The struggles took a big step to a conclusion Saturday, but the NCAA’s show goes on.

“I’d like to get away from the compliance guy, to be honest — not because I want to cheat just because I’m tired of being told what I can’t do within the rules,” Boynton said. “Like I can’t I use 13 scholarships. That’s what everybody gets to do. We just got to stay in communication with the people who know that area better than I do and then make sound decisions that are right for the program. Obviously, we’ll have some days we can’t go out recruiting.

“There’ll be some young person out there, three of them probably over the next couple of years, that won’t be able to go to college on scholarship. That’s another unfortunate reality of this. Our 13th scholarship player probably doesn’t play that much. But it’s one less kid out there that’s on a college basketball scholarship. I don’t know who that’s good for.”

5. But the Banned Season Is Over

Before Mike Boynton coached a basketball game as the head coach at Oklahoma State, he had to answer questions about the FBI investigation that led to his team’s NCAA Tournament ban this season. He was hired in 2017, and in 2022 the major piece of those sanctions has finally ended.

The looming threat of a postseason ban turned into a postseason ban. Then it was delayed with OSU’s appeal. Then the decision was upheld. Boynton has been candid throughout this time that it was a major piece of negative recruiting used against him. Coaches were telling kids not to go to Stillwater because the Cowboys were going to get hammered.

Unjustly, the Cowboys did get hammered. As mentioned, the residual effects of that hammering isn’t done. But the one headline-grabbing thing is over with, and for the first time Boynton is in a landscape where he doesn’t have to hear about an NCAA Tournament ban.

“If I never have to think about any sanctions again, that will be the ultimate, like, ‘It’s over,'” Boynton said. “But I still got the scholarship thing I got to figure out, there’s recruiting days I got to factor in, how many guys come visit, how many times we can go out, when you can call people — so there’s still a lot of stuff to figure out. But the big part of it, not having to worry about people telling the kid, ‘Hey, if you go there, your season’s gonna be over on March 5,’ it’s certainly something that we can feel good that’s behind us.”