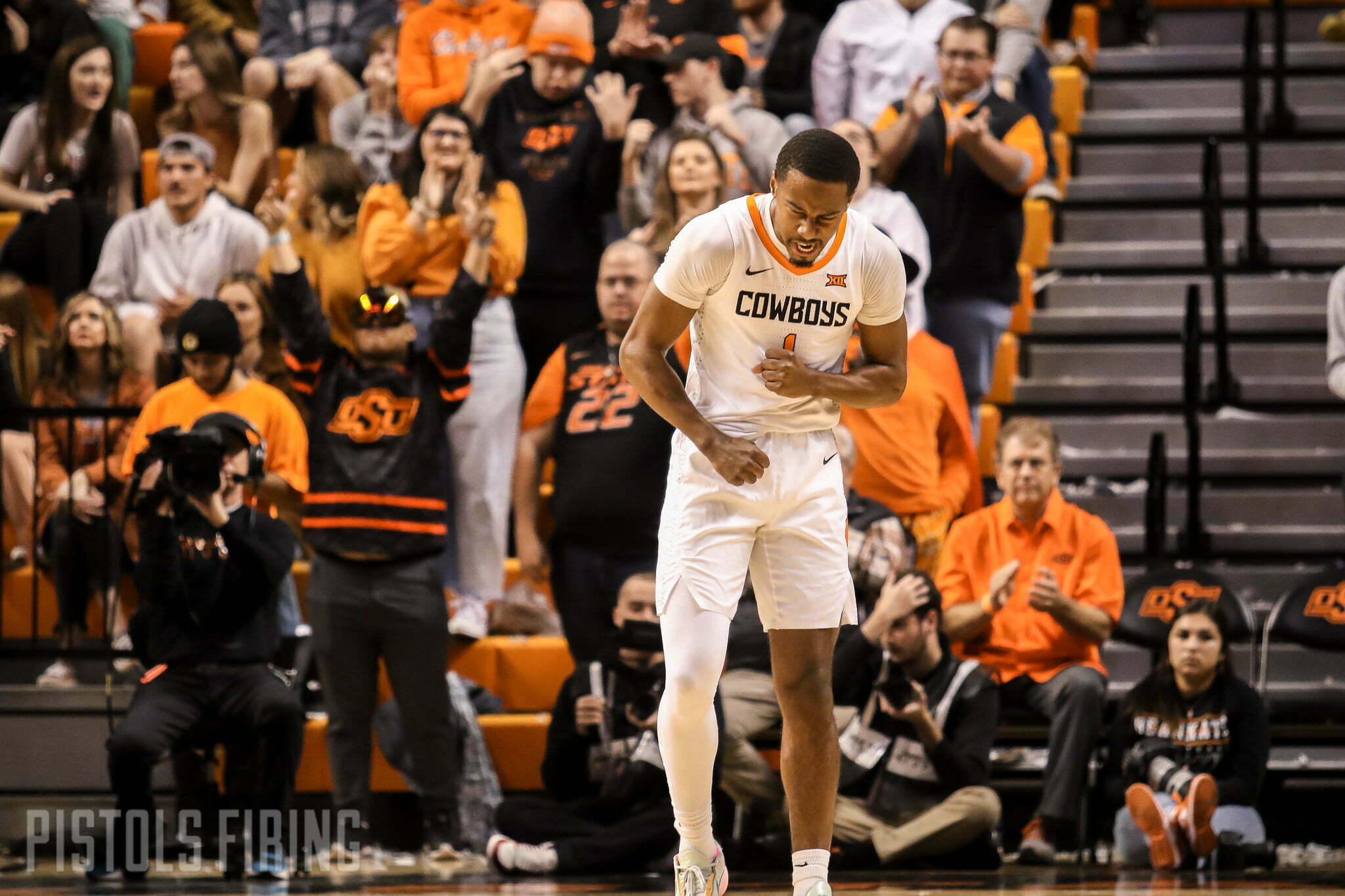 The rollercoaster that is the Cowboys’ nonconference slate continues — this time it’s another up.

Oklahoma State beat Wichita State 59-49 in Wichita on Saturday night. The Shockers never led, while OSU built its lead to 14 midway through the second half. OSU also shot 39% from 3 to the dreadful 5% (1-for-21) Wichita State shot. Here are five thoughts on the game.

1. An Embarrassing Showing from the Worldwide Leader

ESPN has about a bajillion dollars, but somehow — in 2022 — we were all gathered around our radios (streaming, sure) like it was 1922 to listen to an entire half of basketball.

Now, it isn’t ESPN’s fault that it took Memphis and Texas A&M (the game on ESPNU before OSU and Wichita State) longer to play 10 minutes of basketball than it did OSU and Wichita State to play 20 minutes of basketball. But among ESPN, ESPN2, ESPNU, ESPN News, ESPN+, some guy in the front row with a cellphone, how is it possible that nothing happens for an entire half?

The bottom of the Memphis-A&M game said OSU’s game was streaming on the ESPN App (lie No. 1). The ESPN App — for an entire half of basketball — said this (lie No. 2):

Apparently some were able to get the stream going on the app. I got messages from two people who had success, but many, many more did not.

So, it feels odd whipping up thoughts on a game I only saw one half of — but here we go.

2. Have a Day, Chris Harris

For a team that struggles with turnovers, OSU got a solid days work from Chris Harris.

Harris, a feel-good story in college basketball this season after battling through multiple season-ending knee injuries, might not have scored Saturday, but he tied a team-high with five assists and did so without committing a turnover. And in just 18 minutes on the floor, Harris was a team-best +16, meaning OSU was 16 points better than Wichita State when Harris was playing.

Before you go saying, “He should be the primary point guard!” Harris has struggled at times this year against high-pressure defenses. But his incredibly high basketball IQ allowed him to slice and dice the Shockers’ soft zone.

OSU doesn’t need Harris to be a leading scorer or leading assist man; the Cowboys just need him to fill a role and give solid minutes like he did Saturday.

Bryce Thompson has unlocked a new part of his repertoire over the past six game — the 3-point shot.

Thompson led Oklahoma State with 19 points Saturday, going 5-for-9 from 3. He is stepping into his 3s more confidently as of late, shooting 14-for-32 (44%) over the past six games. He shot only 16 3s in OSU’s first five games — meaning he is taking, on average, 2.1 more 3s a game across the past six. If the 3 can fall consistently for Thompson, it opens up the mid-range and floater game that he plays so well.

He also shared a team-high with Harris in assists with five and played some solid defense, something that has also gotten better over recent weeks. Late in Saturday’s game, Moussa Cisse helped off in the paint to go for a block, and Thompson slid under and helped off on Cisse’s man to force a Wichita State turnover — he helped the helper.

Thompson did, though, have a team-high four turnovers himself. No one else had more than two. With the improvement in perimeter shooting and defense, maybe that’s his next step. On the season now, Thompson has 25 assists and 30 turnovers — not ideal.

Although his one assist might not show it, Wright did conduct OSU’s offense more, bringing the ball down the floor and initiating offensive sets. This takes the burden off Thompson and Avery Anderson, who can focus on scoring, and it also seemed to open up things for Wright, who tied a season-high with 16 point to go with six rebounds and four made 3s.

That 3-point shooting is the primary reason Wright was brought to OSU. The Cowboys struggled mightily shooting teams out of zone defenses last season, but time and time again Saturday, Wright or Thompson made the Shockers’ soft zone pay.

The Cowboys have one nonconference game remaining before things get real and they head to Phog Allen Fieldhouse for the start of Big 12 play.

This nonconference stretch has been underwhelming — OSU is 7-4. Losses to Southern Illinois and UCF sting, and the loss to Virginia Tech last weekend was also avoidable.

But there have been some ups. As inconsistent as this team has been, you can see the potential. If OSU takes care of the ball and is average from 3, it’s a pretty good team. Against Texas A&M-Corpus Christi on Tuesday, the Cowboys have one more opportunity to build some sort of consistency before the real resume-building stretch begins.