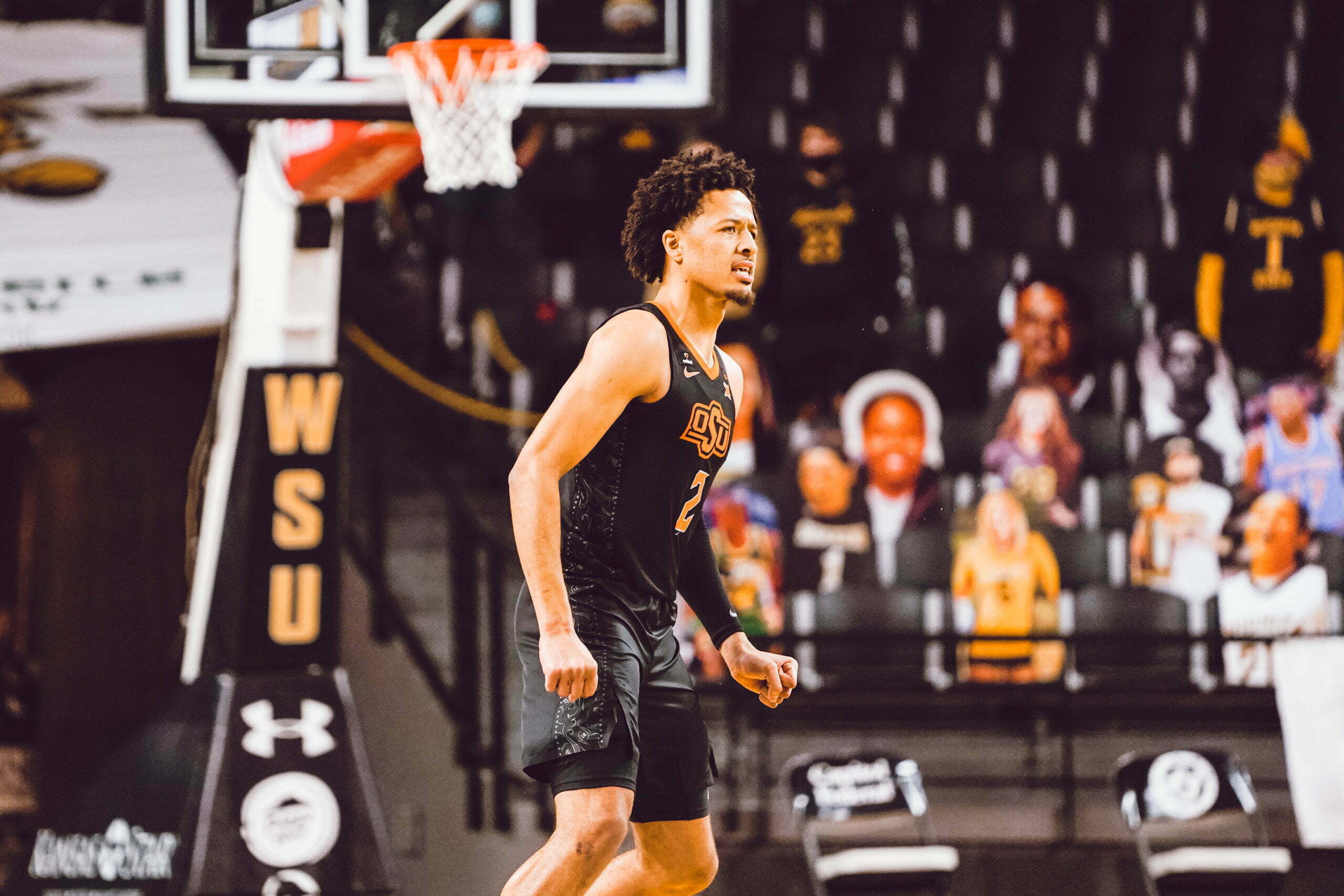 Oklahoma State beat Wichita State 67-64 on Saturday in Wichita after the Cowboys’ all-star freshman hit a go-head 3-pointer with 9.8 seconds to go.

The game was close throughout thanks to OSU turnovers and Wichita State scoring 17 points off free throws, but in the end the Cowboys’ talent was enough to leave Kansas with a victory.

Here are five thoughts on the game.

1. Cade Does It Again

Saturday was far from Cade Cunningham’s best college game, in fact it might have been his worst, but with 6-0 in the balance, Mike Boynton knew where to go to get a W.

“I knew I was gonna take the last shot,” Cunningham said. “Coach sent everybody to the baseline. I kind of struggled a little bit throughout the game, but the team kept us in it, kept my confidence high. I had full confidence shooting the shot and went down.”

Although Cunningham’s shot wasn’t particularly falling throughout the game, it showed just how cool the freshman could be that he wasn’t forcing up shots to try to find a rhythm.

It was a team effort in the second half for the Pokes with Matthew-Alexander Moncrieffe scoring seven points in the frame and no other Cowboy scoring more than four.

It happened Tuesday when Cunningham turned a down game into a good one, and it happened again on Saturday.

2. The Lineup Change No One Expected

Mike Boynton has talked this week about the possibility of changing his starting lineup. He did, but not in the way anyone expected.

Bernard Kouma started in Kalib Boone’s place at center. Entering the game, the freshman from Chad in Africa averaged just 3.5 minutes a game. He played 12 minutes Saturday, where he recorded three fouls and a turnover, but Boynton said Kouma did more than was showed up in the box score.

“Bernie’s stat line will tell you that I’m an idiot,” Boynton said. “He had three fouls and a turnover, that’s all the stat sheet says, but his 12 minutes were invaluable. We got off to a really good start offensively. He gets guys open. He’s a big man as a screener.

“… He did a really good job of setting the tone for us physically inside. I thought it’s 12 minutes were really, really valuable to our team.”

Boone scored in double figures in his past two outings, but he played just 15 minutes, scoring four points on 2-for-2 shooting against Wichita State.

The game will be remembered for Cunningham’s game-winner, but Isaac Likekele kept the Pokes afloat.

A junior and unquestioned leader of OSU’s squad, Likekele brought down a career high five offensive rebounds. For reference, Wichita State had eight as a team.

Likekele also scored a team-high 14 points on 11 shots to go with his eight total boards. Likekele hasn’t outright stuck out this year with guys like Cunningham, Moncrieffe, Rondel Walker and Bryce Williams have had more flashy standout performances. Likekele is just there making sure OSU wins.

“I have been getting a lot of questions lately about Isaac Likekele, where he is, has he deferred too much,” Boynton said. “Ice is a winner. That’s what his value is. The kid cares about winning.”

The past two games, OSU has gotten torched from 3-point range, but not Saturday.

It looked early like it was going to happen again when Tyson Etienne hit two early triples, but the Shockers made just one of their 14 attempts in the second half.

This game could’ve gotten out of hand if it wasn’t for OSU turning over the ball 15 times and Wichita State turning that into 12 points. Wichita State also scored 17 points from the foul line, the most a team has scored from there against OSU this year.

5. Anderson Back in Limited Minutes

Avery Anderson played Saturday for the first time since Nov. 28, and I forgot how fun he was to watch.

It’s believed Anderson had to sit out because of COVID-19 protocol, though that hasn’t been confirmed, so he didn’t play a ridiculous amount after being out of action for too long. But, he took advantage of his 11 minutes.

He finished 11 points on 3-for-4 shooting, hitting his only 3-point attempt.

Anderson being back also allowed OSU to play three point guards at once, with the sophomore sharing the floor with Cunningham and Likekele. With the three of them sharing the floor, Boynton can put Cunningham (6-8) and Likekele (6-5) at forward spots and force bigs to guard them in space. That won’t often end well for the bigs.

Up next for the Cowboys is Big 12 play with the shortened season.

OSU plays TCU and Texas next week, and it will be interesting to see if all these close games help or hurt the Cowboys moving forward.

On a broad look, the positives have been:

Cunningham in particular has been able to level up his game when it matters in the clutch. It makes you wonder if the Cowboys will be able to do that as a squad against Big 12 foes.