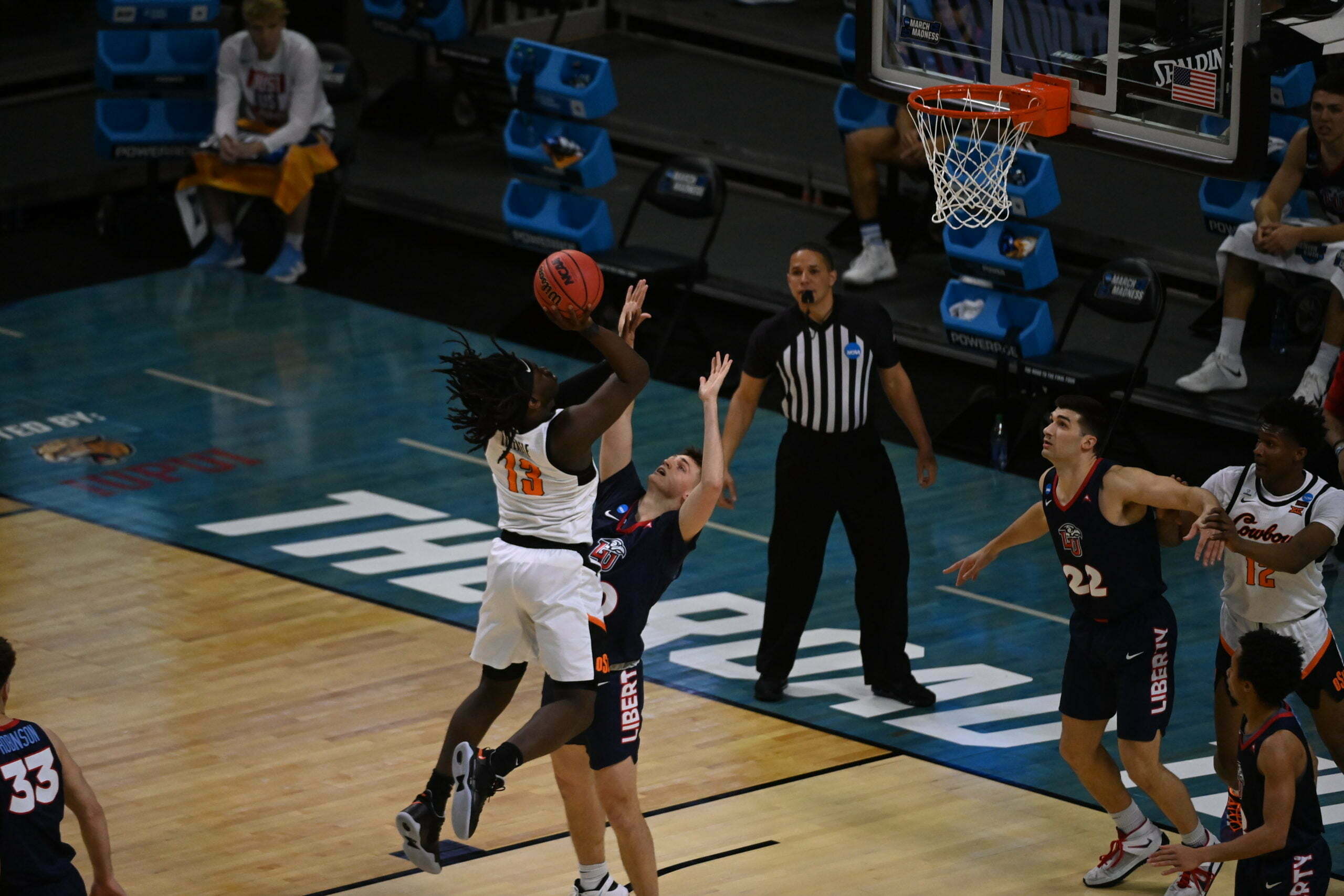 INDIANAPOLIS — The Cowboys didn’t have Friday’s cleanest win, but it doesn’t matter how they come this late in the season.

Oklahoma State beat Liberty 69-60 on Friday in the First Round of the NCAA Tournament. Here are five thoughts on the Cowboys’ 21st win of the year.

Cade Cunningham was at the foul line in the second half, and a heckler shouted “Cade! I’m not impressed! You’re 1-for-6 from 3!” That was a mistake on that Liberty fan’s part.

Shortly after, Cunningham got the ball in isolation, hit a patented pull-up 3, and sent some pleasantries back in that fan’s direction.

Cunningham didn’t flat dominate in his first NCAA Tournament game, but he closed late to finish with 15 points, five rebounds, an assist, a block and two steals. He struggled to find his shot, as he was just 3-for-14 from the field, but he did score nine of OSU’s final 11 points.

Cunningham got in some foul trouble thanks to some charge calls (at least one of which was woeful), so Liberty did a good job of keeping him out of rhythm. And Cunningham wasn’t afraid to defer to guys like Avery Anderson or Matthew-Alexander Moncrieffe when Cunningham was getting doubled anywhere below the foul line. Those guys picked up the slack.

It wasn’t the “One Shining Moment”-type night for Cunningham, but since he didn’t try to go full-blown hero mode, OSU gets to advance. So, Cunningham can try again Sunday. Anytime a player scored 15 points and people are talking about him having an off night, that probably means that player is good.

“I don’t really worry about Cade,” OSU coach Mike Boynton said. “I think everybody else worries about him a lot more than I do. First of all, I’ve known the kid since he was 14. I know how he’s wired, and I know that he wants to play to win. If that means he’s got to score 10 points and get other guys involved and allow other guys like Avery Anderson or Matthew-Alexander or Ice kind of carry the load offensively, he’s comfortable with that. That’s what’s given us a chance to have a really successful season, he hasn’t been so self-absorbed that just because he isn’t scoring that he’s not completely engaged.”

Avery Anderson isn’t on a hot streak. He is just good at basketball.

Anderson scored a game-high 21 points on 8-for-14 shooting in his first NCAA Tournament game. He also ripped down seven rebounds.

Anderson took over a stretch of the first half. Liberty had a lead, but Anderson wouldn’t let the Flames get too far away. He scored OSU’s final 10 points of the opening frame to see OSU enter the break trailing 30-27.

He put up another seven points in the second half and grabbed two second-half steals, making four in the game.

Anderson has been on this supposed hot streak for most of the season, and Boynton said after the game that it isn’t a hot streak at all.

“At some point, I would hope that people would just accept that he’s a good player and not just assume that he’s like pulling this stuff out of his butt,” Boynton said. “He’s been doing it pretty consistently here for the last month or so.”

Bryce Williams has dealt with a stomach bug since the Big 12 Tournament, which has limited his opportunity to practice. He didn’t play at Friday, but OSU got some contributions from Ole Reliable.

He was as aggressive offensively as he has been in a while, bullying his way to seven foul shots.

He was (and has been) a walking mismatch against a Liberty team that had good guard play but lacked the size to contain him.

This is OSU’s first NCAA Tournament win since the 2008-09 season, the win that made Travis Ford a wealthy, wealthy man.

It’s a little ridiculous you have to look back to Byron Eaton to find OSU’s last Tourney win.

With all the “Will they or won’t they?” from this season in regards to the Cowboys in the NCAA Tournament, Friday was a surreal day.

Through the FBI investigation years ago, to signing Cade Cunningham, to a pandemic, to a postseason ban, to getting a recommitment from Cunningham, to an appeal, it felt as if this day would never come.

Although it isn’t a normal NCAA Tournament, fans were able to watch Cunningham wear an OSU jersey and play on a court with “March Madness” across the middle.

And it wasn’t just Cunningham. As noted, he struggled. OSU has a good basketball team around him, and this proud program is playing meaningful basketball in mid-March.

“It feels good to win, but we got a lot more in store,” Anderson said. “I’m just ready to play the next game already. It’s also a blessing that we get to play in this Tournament because at the beginning, it wasn’t guaranteed. They let us in, and we just got to make the most of it.”