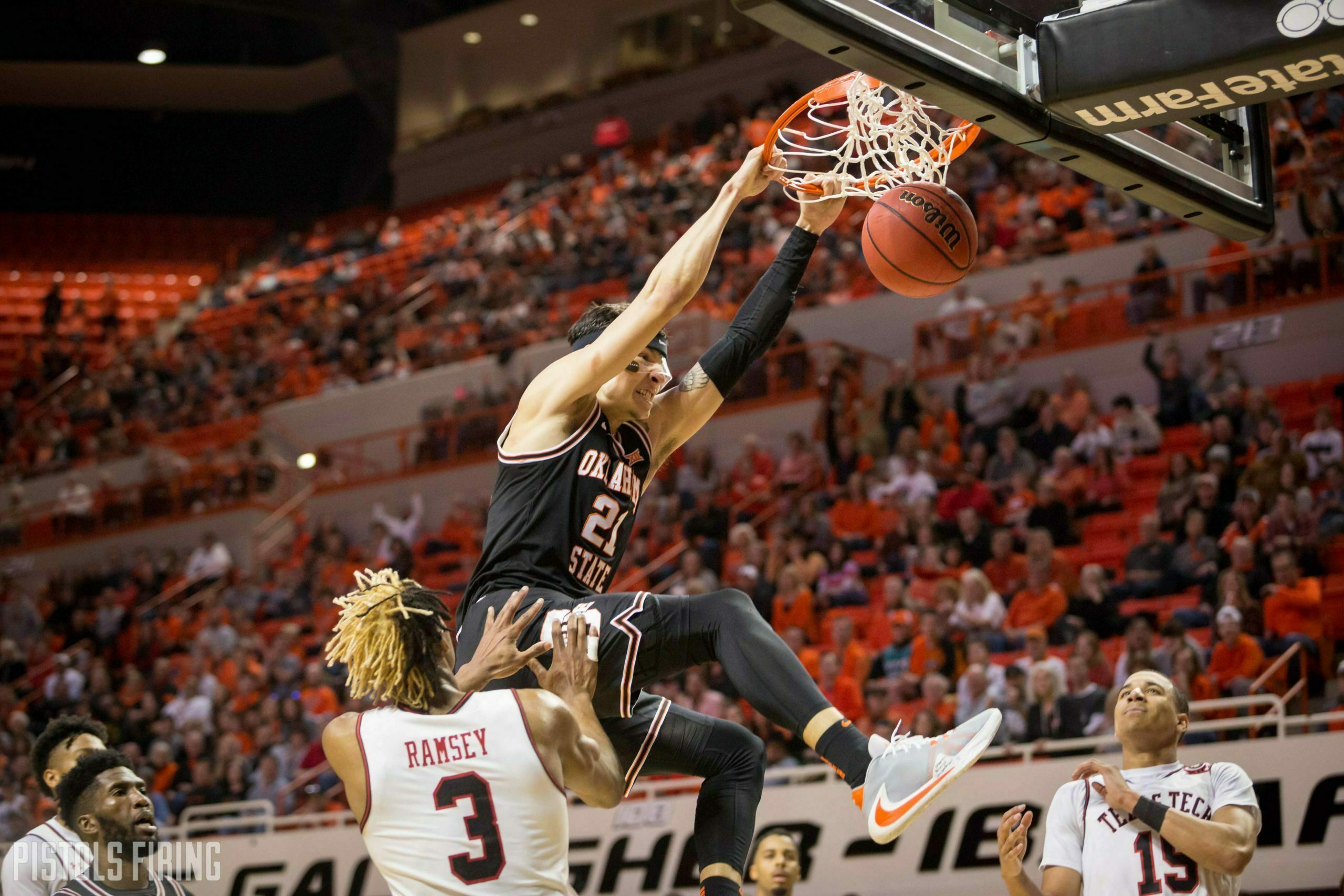 STILLWATER — Don’t look now, but the Cowboys have won three of their past four.

Oklahoma State upset Texas Tech 73-70 on Saturday in Gallagher-Iba Arena, marking the Cowboys’ first win against a ranked foe this season. The win also moves OSU to 3-9 in Big 12 play.

I mentioned this in The Chamber, but these were the best basketball uniforms Oklahoma State has ever worn (including the Cursive Cowboys), and I’m ready to defend that in a court of law.

The trim, the number clarity, the almost overwhelming (but not quite) amount of black, it was all perfect. It also matched incredibly well with Tech’s white uniforms, as they also had a retro look to the trim. 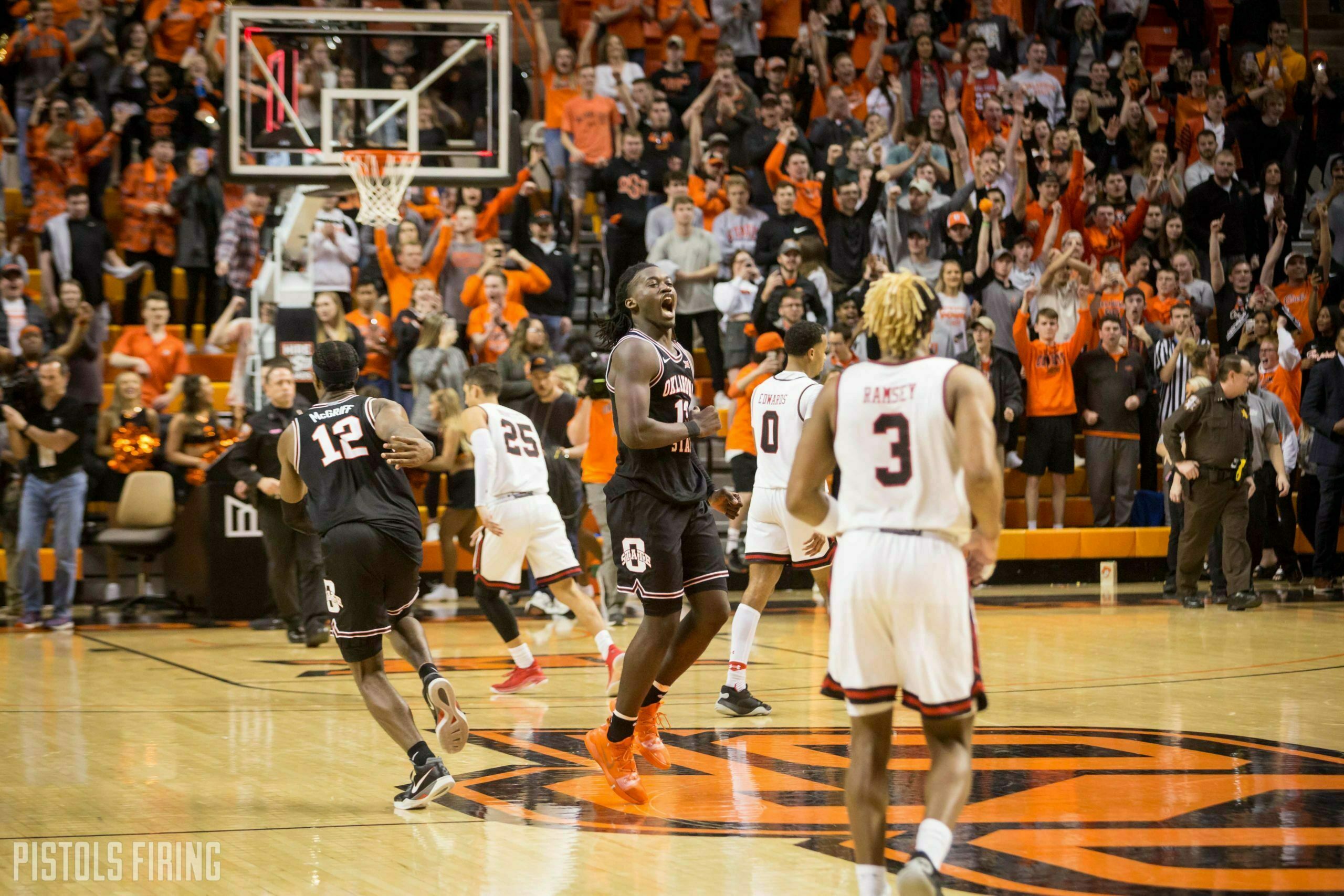 This uniform set sent the 1995 squad to the Final Four, and the current iteration of Cowboys have never lost in them. Thus, these need to be added to the rotation to at least make an “every once in a while” appearance like the Cursive Cowboys do.

It’s the same tactic that OSU won with in Manhattan earlier in the week, and it’s what this team is calling its new identity. In the past two games, OSU has shot just 18 3-pointers and 65 free-throw attempts.

The free-throw line was particularly kind to Kalib Boone and Jonathan Laurent on Saturday. Boone and Laurent scored 16 points a piece, a career-high for Boone and an OSU-high for Laurent.

Boone was a ridiculous 12-for-14 from the stripe. He got his 16 points despite recording only four field-goal attempts.

Laurent was 7-for-8 from the foul line, not missing one until there were 16 seconds left.

In total, the Pokes went 31-for-38 (82 percent) on free ones. It’s the most free throws they’ve shot and made this season.

“Our job as a staff is to find ways to still have success (despite 3-point shooting struggles),” OSU coach Mike Boynton said. “We’ve done it through our defense and rebounding and trying to get to the free-throw line a little bit more and driving the ball to the basket. Gotta give credit to those players for making the adjustment, though. It doesn’t work if they try to fight it. They’re completely bought into what we’re trying to accomplish and believe that we can continue to have success moving forward if we keep playing that way.”

Year 2 wasn’t a kind one to Boynton and Year 3’s Big 12 start had a good chunk of OSU Twitter ready to move on from Boynton.

It’s one game in the grand scheme of things, but with the spectacle that was made of Saturday, this could be a big win for the Boynton era of OSU hoops.

“This isn’t about me at all,” Boynton said. “It is about those former players and coaches and managers, whoever were here as alumni. It’s about these current players, and in a lot of ways, it’s about our fans way before it’s about me. I don’t know how long I’ll get to do this. I hope I can do it forever, until I can’t coach anymore. I’m just in place for a moment, right? Whatever that moment is, I don’t know. It may be 30 years. My son may play here one day. I don’t know if he’s good enough or not. Maybe he’s just a ball boy or something.

“It’s about the people who put that uniform on and people who pay their money to come watch those kids play hard. I’m just glad to be a part of it.”

Lindy Waters doesn’t dunk all that much, but he tried to tear the goal down in the second half.

Off a backdoor pass from Isaac Likekele, a masked Waters put the ball behind is head before throwing down and holding onto the rim for a few beats for good measure. The slam was Waters’ only made field goal of the game, and it gave OSU a 62-60 lead at the time.

Here is a conversation Kalib Boone and Jonathan Laurent had about Waters suppressing his leaping ability.

“It makes me mad,” Boone added. “He’s like Keylan. Keylan and Lindo don’t ever try to dunk on people.”

“They can jump,” Laurent said.

5. Is OSU Back in Tourney Contention?

This may seem far fetched, but stay with me here: the NCAA Tournament might not be out of the question for the Cowboys.

Having won three of their past four, the Pokes are trending up in the most competitive conference in college basketball. With six games to go, OSU plays:

Four of those six all of a sudden seem quite winnable, being OU, ISU, K-State and UT. If OSU won those four, they’d finish 7-11 in the Big 12. That paired with a 17-14 overall record probably wouldn’t be enough (it could be for the NIT).

But if OSU could upset a ranked West Virginia or a ranked Kansas on the road and a win a pair of Big 12 Tournament games, things could get a little interesting. This is obviously putting the chariot well ahead of the horse, but for a team that started the Big 12 season 0-8, it seems crazy to think the Cowboys could be in any contention for postseason play.