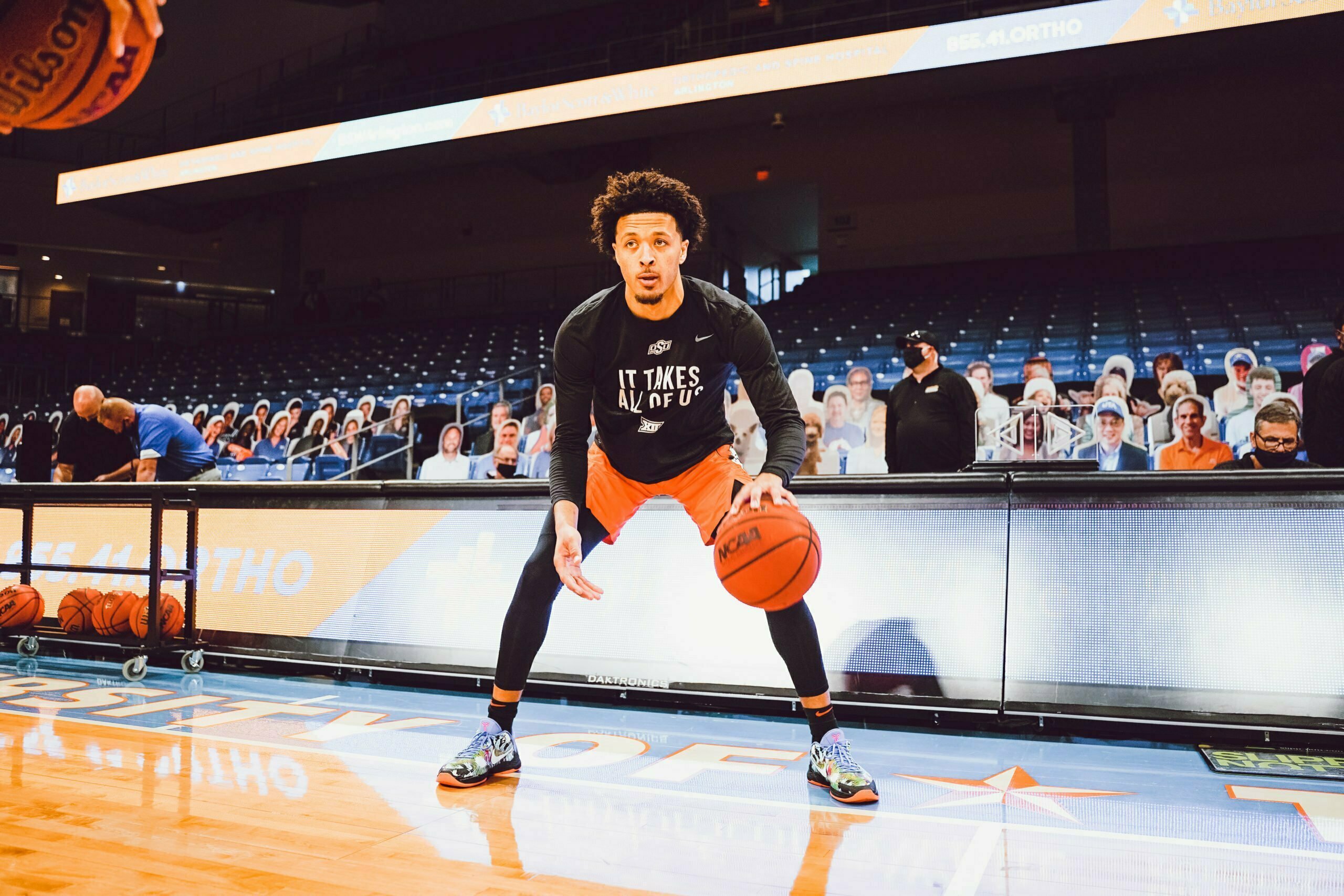 The Cowboys’ first game didn’t quite live up to expectations, but in fairness to the Pokes, expectations were irresponsibly high.

Oklahoma State beat UT-Arlington 75-68 on Wednesday in Arlington. It wasn’t the cleanest debut of OSU’s “new era,” but regardless, the Cowboys are 1-0. Here are five thoughts from Cade Cunningham’s first collegiate game.

1. It Wasn’t Pretty, but the Pokes Still Won

Turnovers, rebounds and free throws are usually some telltale stats whether a basketball team won a given game. The Cowboys didn’t do well in two of those category’s but still found a way to win.

OSU turned the ball over 18 times Wednesday afternoon to UTA’s five turnovers. The Pokes were also just 14-for-27 (52 percent) from the foul line. If OSU turns it over 10 times and is 65 percent from the charity stripe, this thing might’ve been ugly.

With all the talent this team has, especially in regards to guards, I expect this won’t be a lingering issue for OSU moving forward.

An optimist will say that this is a young team playing in its first basketball game in a long time, so those issues should get cleaned up as the season rolls along. I think I’m in that camp for now.

In his postgame news conference, Mike Boynton said he’d give Cade Cunningham a C+ or an B-. Well, I’m excited to see what an A looks like.

Cade Cunningham finished Wednesday’s game with 21 points, 10 rebounds and three assists. Did he struggle at times? Sure. He had five turnovers, but he also did stuff like this:

There were times you definitely knew Cade was adding to the stat sheet, but there were others where I figured he had two points to look over and he had seven. It lined up with what everyone has said about him in terms of him not being a ball-dominant scorer, but just a winner.

He was methodical. He showed the ability to take over when he had to. It was all incredibly promising.

In first half, OSU shot 16 3-point attempts and only one free throw.

With two big point guards who are at their best when attacking the basket, that isn’t what I expected, and Mike Boynton said it wasn’t necessarily the game plan.

“The game plan was to go inside,” Boynton said. “We got some really good looks. They packed it in pretty good. They wanted to challenge us to see if we could make them. I thought Keylan [Boone] and Ferron [Flavors] both got pretty good looks early in the game, Chris Harris, three of our best shooters. They took shots that I needed them to take. I have confidence that they’ll make them. I’d like them to take them after we penetrated a little bit more or thrown it into the post, but that’s just not what happened today.”

OSU’s go-to 3-point shooters Wednesday weren’t as hot as expected, but I wouldn’t anticipate Keylan Boone and Ferron Flavors combining to go 3-for-13 every night, especially when Flavors is capable of shots from this far away:

The Cowboys have themselves a set of sparkplugs in Keylan Boone and Matthew-Alexander Moncrieffe.

The forward tandem were relentless in pursuit of the basketball, combining for seven offensive rebounds.

Showing his development, Boone had a career night. The sophomore from Tulsa scored 10 points and had 12 total rebounds, making for his first career double-double. He snagged his double-double before Cunningham, and with all eyes focused Cunningham’s way, it sneaked up on you.

Moncrieffe started the game on the bench, but the Canadian freshman came on and had 11 points (second on the team to only Cunningham) and seven rebounds. He was also a team-best plus-14 in plus/minus.

Moncrieffe’s night could’ve been even bigger, but he went just 1-for-7 from the foul line in his first college game.

Cunningham and Isaac Likekele are expected to do most of the heavy lifting on this team, but if the Cowboys can have role guys perform like this, they should be in good shape.

5. Ice Out of Nowhere

It seemed at times Wednesday that Likekele lacked aggression when attacking the rim, but then you look at the box score at the end of the game and see all the provided OSU with.

Likekele finished the first game of his junior season with nine points (on 3-for-4 shooting), 13 rebounds and seven assists. He was also plus-13. All that, and he didn’t play particularly well.

That should be a scary thought for opponents, as should the fact that he made 50 percent of his 3-point attempts, going 1-for-2. Likekele attempted only 39 3s in his first 60 games of college basketball. Him putting two up Wednesday means he is gaining confidence in his shot.

Teams already have a nightmare of a time stopping him when attacking the basket. If he is a threat to shoot a 3, he nearly becomes unguardable.