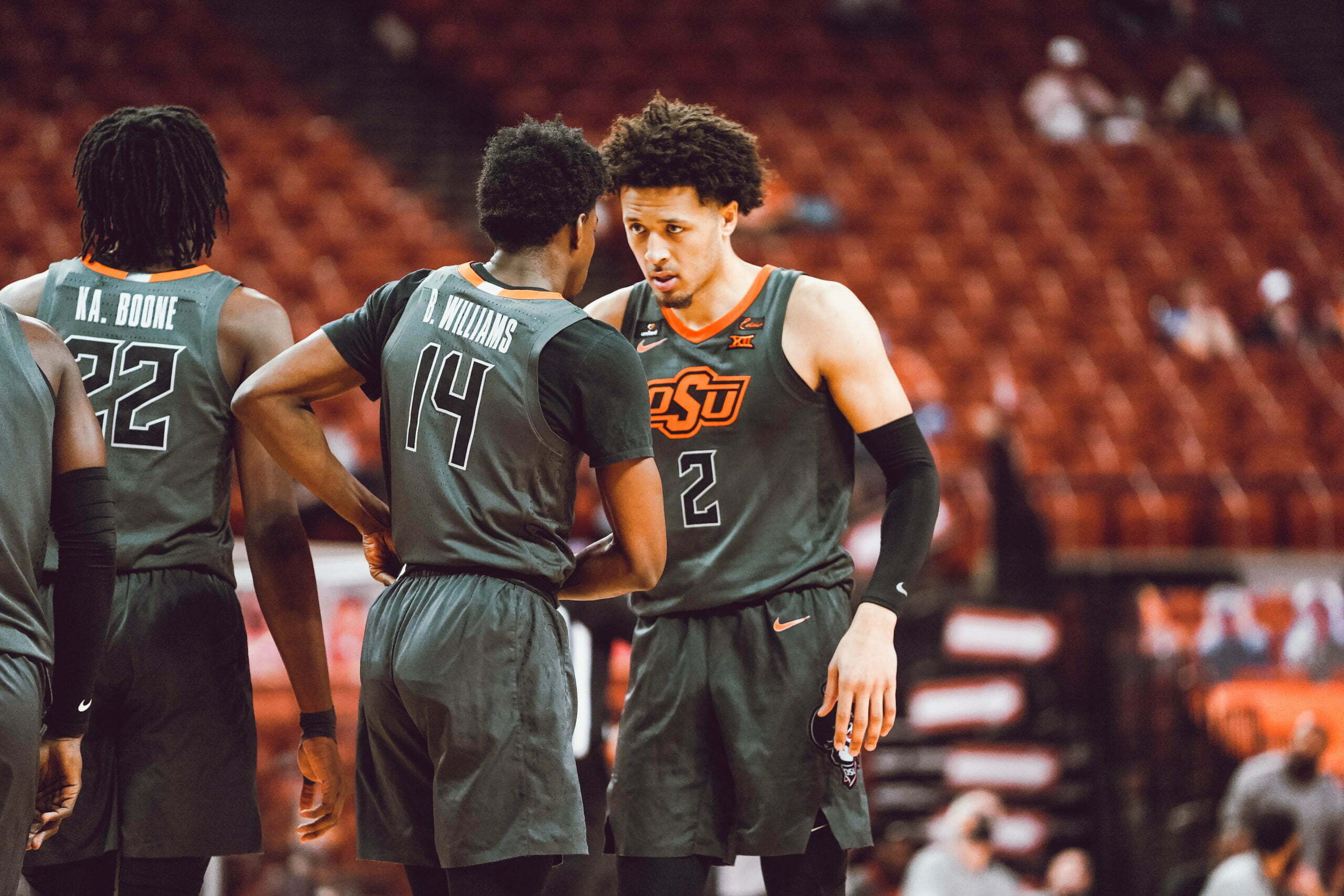 The Cowboys will enter 2021 without a conference win.

Oklahoma State fell to Texas 77-74 on Sunday in Austin in what was the Pokes’ final game of 2020. The Cowboys proved competitive with the No. 11 Longhorns, but being close to wins won’t get the Pokes in the NCAA Tournament. Here are five thoughts from the game.

There’s the old cliché that basketball is a game of runs, and those runs have stuck it to the Pokes through two conference games.

OSU led this game at the half, but the Longhorns went on a 17-0 run early in the second half that essentially put a bow on this game with 10:49 to go.

It came at a different time, but it felt similar to the 9-0 run TCU went on to close against OSU on Wednesday night.

If the Cowboys hold Texas to just a 10-0 run, they probably pick up a big conference win on the road against the No. 11 team in the country, but the Pokes can’t afford to have these woeful offensive stretches in the Big 12 conference.

Between the two-minute stretch Wednesday and the four-minute stretch Sunday, the Cowboys are about six minutes from being 2-0 in conference play, but they can’t keep having those stretches if this team wants to live up to its preseason hype.

“You’re talking about two one-possession games, right?” OSU coach Mike Boynton said. “One at home, one on the road. The one at home, you got eight-point lead with two minutes and 20 seconds to go. We’re not getting run out anybody’s gym. We’re not, not competing. There were a couple games last year where we weren’t competing this early in conference play.

“That’s not the goal. The goal is to win. I’m not accepting this, but I know we got 17 more games to play in regular season, 16 more league games and the nonconference game thrown in there. So I don’t want our guys to feel defeated. There’s a lot of opportunities out there for us to go and do what we all want to do.”

2. Cade Struggles Early, Takes Over down the Stretch

A trait of elite-level basketball players is the ability to take over down the stretch, and Cade Cunningham can do that.

Cunningham scored 13 of his 25 points in the final 5:55, but the projected No. 1 NBA draft pick hasn’t started games all that hot. He had seven at halftime, but did so on 3-for-9 shooting.

Some will say he needs to figure it out from the tip off, but it’s hard to fault a guy who is averaging 19.1 points a game on 45% shooting through his first eight games at this level.

It probably has something to do with the expectations all of his hype garnered. What would he have to do for people to feel like he live up to it? Average 40 a game and lead OSU to the Final Four. Cunningham is a proven winner, but scoring isn’t necessarily his forte (not Phil). So, asking him to put up 15 by half at every game might be an overreach.

Other guys getting going around him is something Boynton brought up as to what can help Cunningham settling into games quicker.

“Some of it is I think he’s playing like there’s a little pressure on him that he’s got to make all the plays, and he doesn’t,” Boynton said. “We had a five-point lead without him playing particularly well in the first half. We got to understand that there are other guys who can take some pressure off him in terms of playmaking.”

Boynton made some substantial changes to his starting lineup Sunday.

When I first saw that group, I told our forum that Texas was likely going to pack the lane. OSU attacked the basket rather than settling for 3s, an aspect that has lacked this season.

It provided mixed results. Obviously the loss will make it seem like it didn’t work entirely, but there is potential there to say it can work.

OSU scored 44 points in the pain to Texas’ 24. If a team is going to constantly attack the rim, though, it better make its free throws. OSU struggled from the stripe again Sunday, going just 13-for-21.

Meanwhile, OSU attempted only five 3s in the first half. The Cowboys finished the game 5-for-17 from deep, but they had to attempt some in the second half with Texas pulling away.

Flavors, who started OSU’s first seven games, played just four minutes Sunday. That exemplifies that OSU is going to work away from the 3-point shot until the Pokes prove they can hit them.

“We’re gonna always play to our strengths,” Boynton said. “We believe a strength of ours his ability to shoot it, but we haven’t shot it well. So, not going to have a team continue to shoot 30 threes a game and shoot 20%.”

Shooting and rebounds are generally two important aspects of basketball games, and the Cowboys didn’t do either well against Texas.

Some general team stats that often tell how a basketball game went are free throws, rebounding, points off turnovers and 3-point shooting. OSU lost in all of those aspects and still lost by only a 3-point bucket.

OSU got out rebounded 44-38 and gave up 18 second-chance points.

And OSU made five 3s to Texas’ nine.

With just those stats, you would’ve thought the Longhorns won this game by 40. I don’t know if that’s good or bad for OSU that the Cowboys lost in all of those statistics but kept the game close.

Not much more is needed with this one.

Maybe it’s a good deal for Texas followers to get this Texas exclusive channel, but boy, is it annoying to try to track a single game down when following another team. Luckily, that’s it for OSU and the Longhorn Network this season. Hopefully, I won’t have to try to figure it out for another 10-20 years.