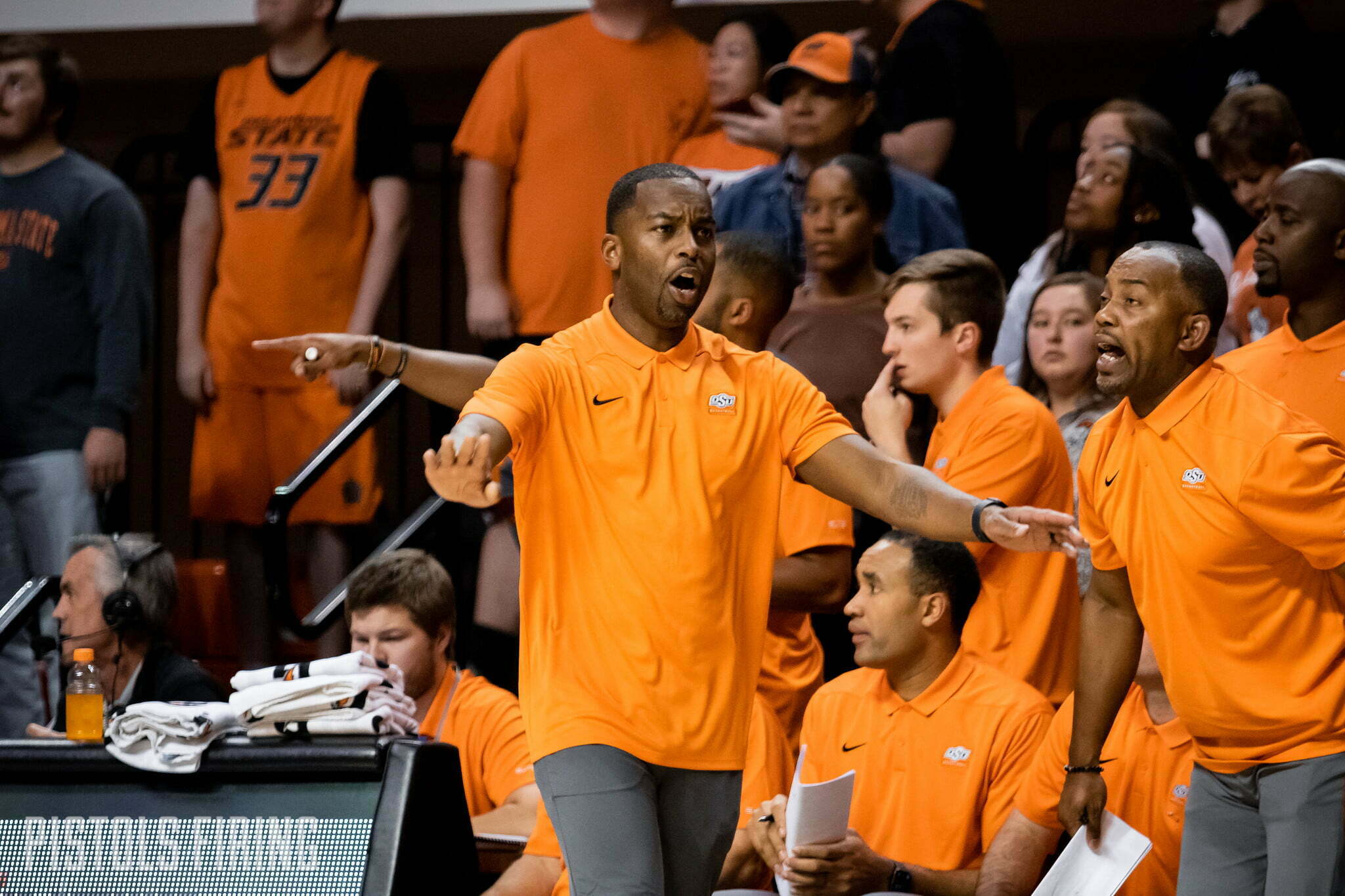 Oklahoma State needed an extra five minutes and a career game from Bryce Williams to beat Oral Roberts on the road. The Cowboys sneaked out of the Mabee Center with a 78-77 win over the 3-3 Golden Eagles.

It was a slow start for both teams, with two and half minutes escaping the clock before the first point was scored. The Cowboys (6-1) took even longer to get on the board, missing their first 11 shots from the field and falling down as much as nine points. The Cowboys slowly got going from the midrange and did some damage in the paint, shooting 42.3 percent from the field. But OSU was hapless from deep, shooting just 2-of-16 from 3.

ORU guard Max Abmas, on the other hand, was white hot in the Golden Eagles’ new icy uniform. He made a career-high seven 3-pointers on 12 attempts and finished with a game-high 29.

Bryce Williams came off of the bench and immediately gave the Cowboys life and then returned to save the game in overtime. He made a pair of tough shots to give the Cowboys the lead and then seal the win and finished with a career-high 21 points on just 12 shots and scored all six of the Cowboys’ points in overtime.

With the Cowboys swarming Abmas at the perimeter, the leading scorer found Trey Phipps for a wide-open 3-point attempt to win it with two seconds left. The career 42-percent 3-point shooter failed to connect with iron.

Here are my five thoughts on the Cowboys’ sixth win.

The Cowboys were active on the glass, out-rebounding the Golden Eagles 51-37 and owning the battle for offensive boards 17-6. According to the ORU telecast crew, the Golden Eagles were 2-0 coming in when opponents were logged an offensive rebounding percentage of less than 20 percent and 0-3 when the other team was over 25 percent. To avoid bucking tradition, the Pokes edged out a one-point win by reeling in 35.4 percent. They were at 35.6 coming in.

But speaking of that, practice makes perfect.

2. Tough Shooting for the Pokes (Especially from Deep)

The Cowboys had plenty of practice at offensive rebounding, especially early. OSU missed its first 11 shots from the field and finished 33-of-78. On the Cowboys first trip down the court they totaled five offensive boards. Great to give yourselves opportunities, but better to pay one of them off.

Things did get better. The Cowboys made some hay in the paint and hit a rhythm in the midrange. But 3-point shooting might not be this team’s thing.

On Monday, the Cowboys turned in season-high 50-percent outing from beyond the arc against Charleston. That seemed to be more the aberration than a step in the right direction. The Pokes went just 2-of-16 from deep. Even Williams, who was otherwise efficient in his career game, was 1-for-4 from 3. Isaac Likekele was 1-for-1. I’m not sure you can even count that one. Fortunately for OSU, they did.

You know who was lighting it up from deep? Max Abmas made more big shots than I remember the entire OSU roster making regular shots.

He buried a 3 with 2:43 left to pull the Golden Eagles within 69-67. Then he buried another with 2:08 left to pull them within 71-70. Abmas went 7-of-12 from beyond the arc, a career high in makes. The ORU broadcast crew called him “Midcourt Max,” which is pretty great (and accurate) nickname. He scored 33 in his game in Stillwater last year and fell just short. His team might have earned the W if he’d tried to make it 32 in Tulsa.

OSU was intent on denying Abmas a look at the basket, even when he was over 30 feet from the basket. With three minutes remaining in OT, Kalib Boone got called for a foul for staying in front of him. The two were closer to halfcourt than the arc. And on the final play of the game, Abmas was swarmed by OSU defenders. He found his teammate Trey Phipps, former Sooner and former teammate of Bryce Thompson, for a wide-open look at a game-winner that came up short.

Oklahoma State hadn’t played ORU inside the Mabee Center since 1997, but Bryce Thompson and Phipps won a state champion on this court two years ago. In his return to Mabee, Thompson mustered eight points on just 4-of-12 shooting. Phipps scored three and was 1-for-4 from the field, including that missed would-be game-winner.

To my knowledge, Bryce Williams has never played on the court inside Mabee, but he looked right at home from the moment he stepped onto it.

Williams provided an instant spark to an otherwise ailing OSU offense off the bench and then showed up in a huge way late scoring eight of the Cowboys’ final 10 points and all six points in overtime.

He gave the Cowboys their final lead with this tough shot.

That spin move in the paint gave the Cowboys a 76-75 lead, and he followed it up with a fadeaway from the top of the key to push OSU up 78-75 and seal the win.