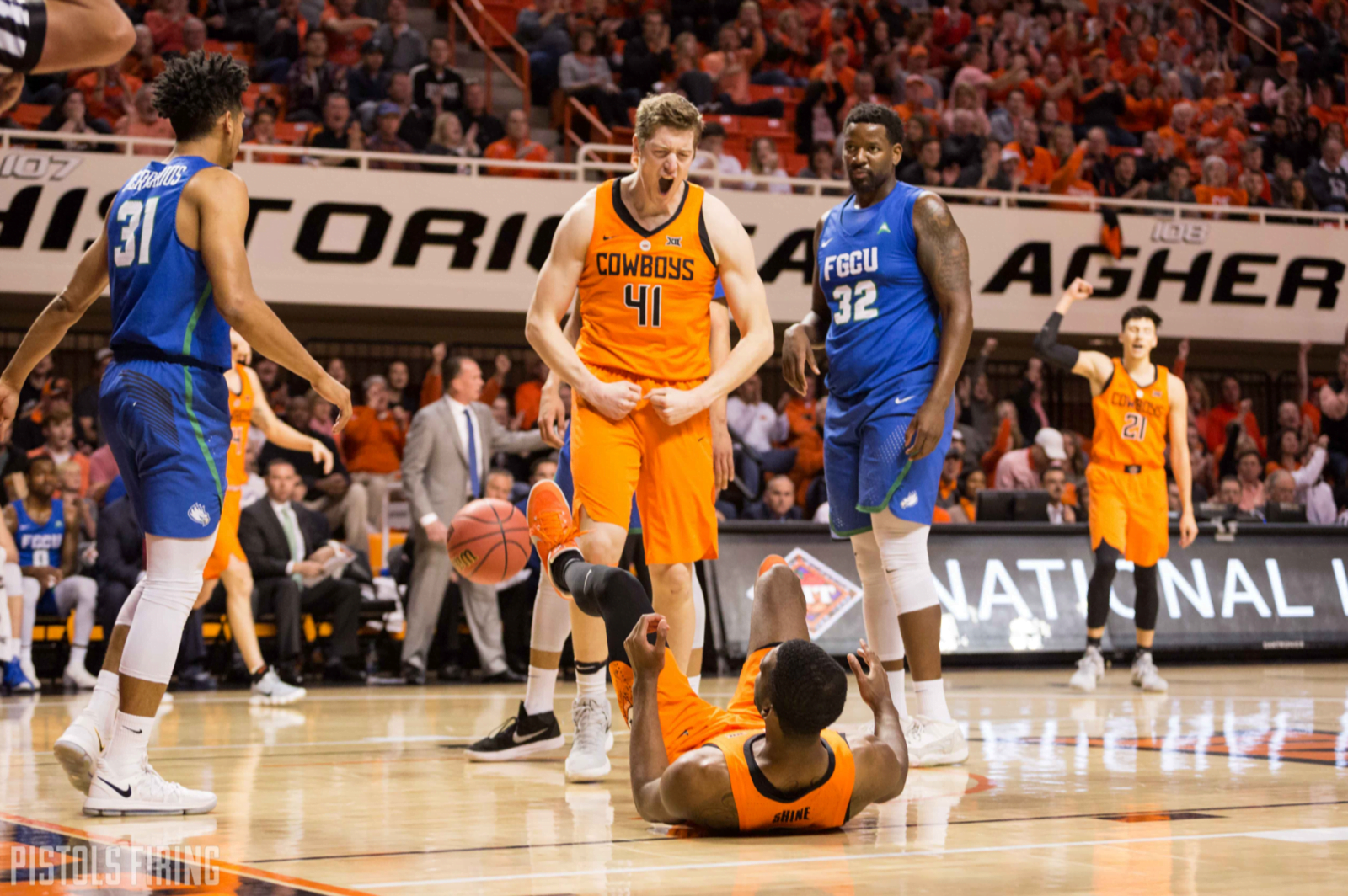 Oklahoma State beat Florida Gulf Coast on Tuesday night in the first round of the NIT in Gallagher-Iba Arena 80-68. The Pokes were led by Jeffrey Carroll who had 18 points (12 of them from the FT line, 8 rebounds and 3 assists and Mitchell Solomon, who notched 13 points and 9 rebounds. The Eagles got 23 points from Zach Johnson and 18 from Brandon Goodwin.

OSU shot 36 percent from the field, which ranks 33rd out of 34 games played this year, but FGCU wasn’t much better. The Eagles shot 38 percent and made more field goals than the Cowboys, but they only got to the line 18 times compares to OSU’s 41 (!) attempts.

After a rough start on both sides in the first quarter (yeah, quarter), it was clear from the second quarter on that Oklahoma State was the far superior squad. They asserted their will at times, but a terrible offensive night from their two offensive stalwarts (Carroll and Kendall Smith) meant FGCU hung around until the end.

Five thoughts on an easy one in GIA.

1. Lindy carried the first half

Oklahoma State only outscored FGCU by one in the second half, and they were buoyed by good defense in the first half and Waters getting after it offensively.

He only finished with 10 points, which all came in the first 20 minutes, but it was enough to set the table for Mitchell Solomon and Co. in the second. Waters can get a little microwave-y at times in that when one of them goes, it feels like they’re all going.

Midway through the third quarter, OSU was shooting 35 percent, and FGCU was shooting 46 percent. If you would have given me those numbers this morning I would have sounded every alarm at my disposal.

Kendall Smith and Jeffrey Carroll combined to go — cover your eyes — 4 for 22 from the field and 0 for 7 from 3-point range. They did have 16 boards and 7 assists, though. It was as poor an combined offensive effort as we’ve seen from them maybe all year, but it came in a game where OSU could afford it, which won’t be the case from here on out.

Two things that stood out, however, were effort on rebounding (48 boards!) and a willingness to get to the line (41 free throws!). A Travis Ford or Sean Sutton-coached team would have been AirBNBing rooms in Galveston at halftime. Mike Boynton’s squad? Not so much. Props to them for recognizing that they were the superior team physically and scoring 58 of their 80 points in the paint or at the line.

One other crazy stat: 16 of OSU’s 20 fourth quarter points came from the line. Two field goals in the last 10 minutes.

I’m guessing there aren’t too many Cam McGriffs in the A-Sun. Oklahoma State was clearly the better, more athletic team. This actually showed up more on defense than it did on offense. Once FGCU got down and had to try and go on runs and shoot their way out of it, OSU was able to converge on them and suffocate them defensively.

I think we can all agree that Mitchell Solomon is not the most athletic player in the Big 12, but even he had a clear advantage on both ends tonight on the Eagles.

OSU won’t be able to play as poorly as they did offensively and win many (if any) more games in the NIT, but on Tuesday they were simply the better pick-up team, and it showed down the stretch.

How is it that the only team OSU has stuffed in a locker this calendar year is also a No. 1 seed in the NCAA Tournament? OSU scored eight straight at the end of the third quarter, and that should have been a wrap with the Pokes up 18. But FGCU climbed within six and at least made Boynton’s pits start perspiring even if he never took his jacket off. They pulled the cord at the line late, but it would be nice to see an OSU team (in any sport) just put the throttle down on an inferior opponent.

• Color on color uniform matchups are the greatest. Fully subscribed.

• I loved watching Boynton coach like it was the NCAA title game. He was locked in!

• I’m a fan of the NIT rules experiment, but I wish they would toss a 24-second shot clock in there, too. I really enjoyed the quarters, bizarre as they were at first.

• McGriff shot kind of a sneaky 40 percent from 3-point range this year.

• Do you think a person could eat soup out of Cam’s traps?