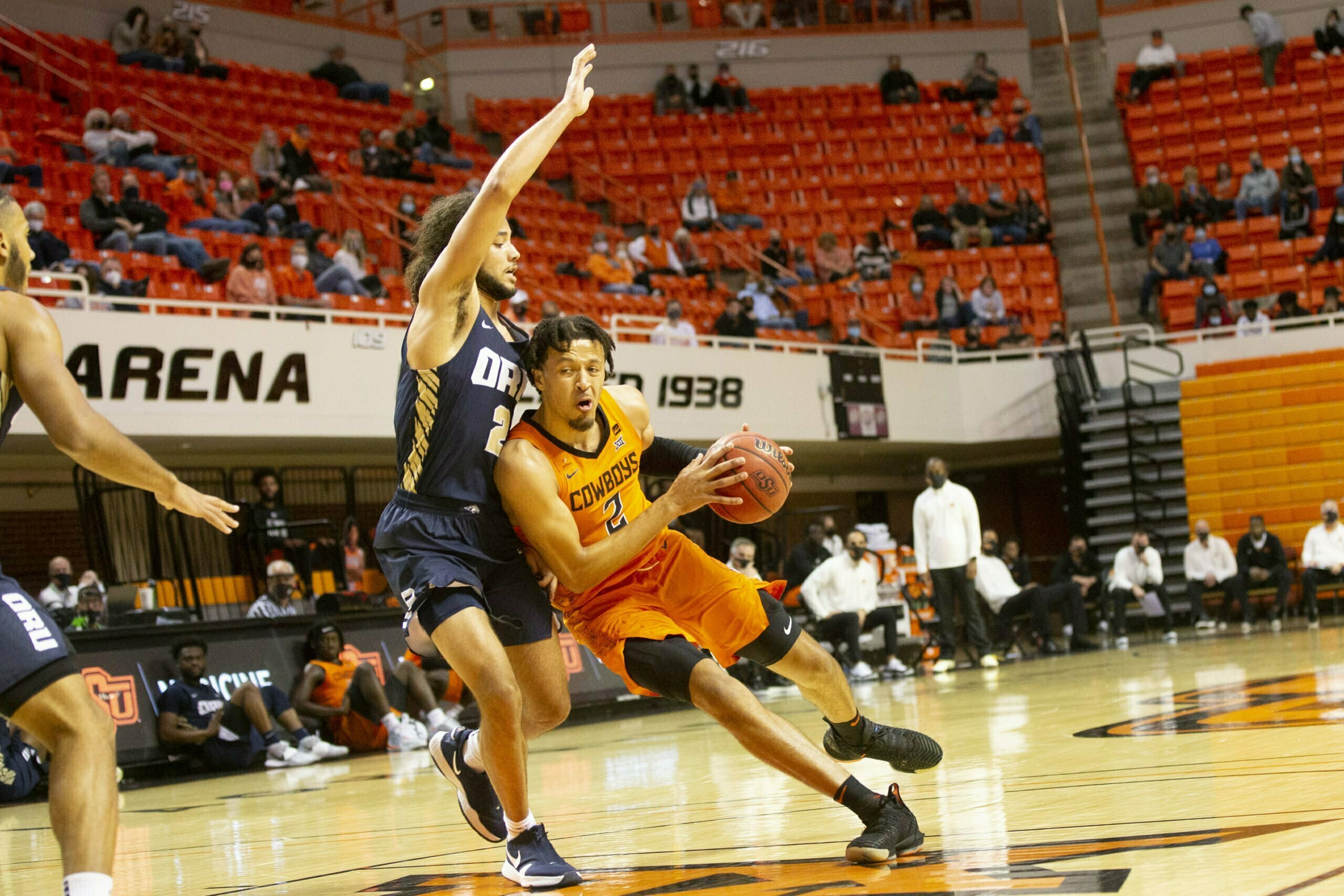 The Cowboys are up to 5-0 after another game that was closer than it probably ought to have been.

Oklahoma State beat Oral Roberts 83-78 on Tuesday night in Gallagher-Iba Arena. The game was tightly contested throughout thanks to Golden Eagle guard Max Abmas scoring 36 on the Pokes.

That marks the second straight game an opponent has scored 30 on OSU after Oakland’s Rashad Williams dropped 32 on Saturday night. Abmas, somehow pronounced ACE-miss, was an ace, but he did not miss a lot from 3-point range. He finished the evening 11-for-20 from the field including a ridiculous 7-for-12 on 3s.

Luckily for the Pokes, they have their own ace. Cade Cunningham scored the Pokes’ final 12 points of the game to hold off the flaming Golden Eagles.

The Cowboys have not started games well this season.

OSU is 5-0, but at half time the Cowboys have led opponents a combined 174-159. That’s plus-15, which isn’t great given the opponents, but it’s even worse if you take out the Texas Southern game, were OSU was up 11 at the half.

Against UT-Arlington, Marquette, Oakland and Oral Roberts, the Cowboys were up a combined 133-129 going into the locker room. That’s just 4 points.

It’s hard to tell right now if this is a legitimate trend OSU should be worried about or whether the sample size of five games is too small this early into the season.

“I’ll usually take about a five-game sample to look, so I’ll go back now probably tomorrow and look at all the things that we’ve done and try to evaluate before we go out and play again on Saturday,” OSU coach Mike Boynton said. “One of the things as hard is we got so many moving parts. We didn’t have Bryce [Williams] the first game. He only played a little bit [against Texas Southern]. Some of that stuff is hard to really manage until you get to 10, 12 games and everybody’s had enough time together. But I’ll evaluate a lot of that tomorrow.”

For the first time in his college career, Cade Cunningham looked mortal.

… But, then he dropped 29 on the Golden Eagles. It’s not too often a college basketball player struggles to 29 points. He scored OSU’s final 12 points of the game.

Cunningham’s struggles were mainly in the first half like the rest of the Cowboys. He had 11 first-half points on 4-for-12 shooting. He didn’t have an assist (OSU didn’t as a team at the break), and he had three turnovers.

For the first time this season, it felt like Cunningham was forcing things rather than letting the game flow through him.

… But then he just dominated the last five minutes. He scored 16 of his points in the final 6:31. That’s a ridiculous stat.

Keylan and Kalib Boone are twins, but the duo showed their differences Tuesday.

Keylan Boone was a glass eater en route to a career-high 12 rebounds. He was, in large part, responsible for the 43-33 rebound advantage the Cowboys ended with. He also ended with six points, two assists, two blocks and a steal.

Kalib Boone had his second straight game in double figures, as he scored 11 points on nine shots. He dominated the opening of the second half, scoring the Cowboys first eight points of the half.

Rondel Walker and Bryce Williams are an unlikely duo, but one that has been great for Oklahoma State.

One is a homegrown, in-state freshman; the other, a senior transfer who has already played at two other colleges. But when the two are hounding opposing guards, it just works.

The two came off the bench and were vital is slowing down the Golden Eagles 3-point barrage. The box score won’t show everything they did, as they combined for just 9 points, but they brought life to a COVID-hampered Gallagher-Iba Arena.

Williams is already a fan-favorite with his hustle, while Williams is somehow more lowkey with it. The pair combined for six steals, though Boynton said he is sure Walker had more.

The crowd was at its loudest when Williams and Walker were sliding across Eddie Sutton Court or running into the stands chasing a loose ball, louder than when Cunningham was taking over late.

“It just showed that that’s what the fans came here for type-thing, to see us play hard and play for them,” Walker said.

5. Time for a lineup change?

Ferron Flavors hasn’t gotten it going this year, and with the success Williams and Walker have had, it might be time for a switch.

Flavors is a floor spreader, something that is a huge positive with guys like Cunningham and Isaac Likekele attacking the rim, but he just hasn’t heated up from 3 this season.

He’s just 8-for-28 on the year from deep, and he is still drawing his man out on the perimeter.

The switch would likely be for Walker or Williams, who are better defenders than Flavors and are shooting better from 3 to start the year. Flavors is a high-level 3-point specialist, so he will likely make these words irrelevant soon. But it could also be good for him to come off the bench to maybe help him find his shot.

“I think part of it is just getting him comfortable with where his shots are gonna come from. He’s playing now with two pretty ball-dominant guards [Cunningham and Likekele]. … One of the things that’s happening, though, is he’s not getting a bunch of great looks because teams aren’t leaving him. They’re kind of banking on letting MA and Ice and Cade operate in the paint, which I’ll take that. That’s value for us.”