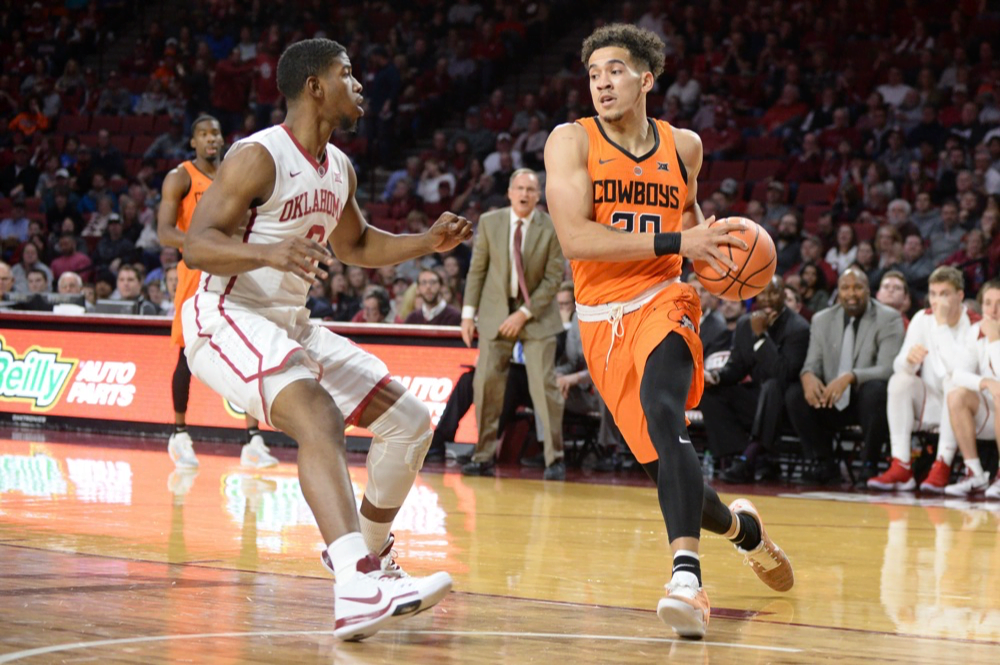 Oklahoma State got walloped in Norman by Trae Young and the Oklahoma Sooners 109-89 in a Bedlam matchup that got more out of hand than a Kansas football game in the second half. OU shot 54 percent from the field and 56 freaking percent from 3-point range in the rout.

Thomas Dziagwa (!) led the way with 19 points and 5 rebounds for the Pokes while Tavarius Shine had 16 and Jeffrey Carroll had 15 points and 10 boards. Young had 29 points, 10 assists and 9 rebounds for the Sooners (kill me) while another freshman, Brady Manek, chipped in 28 points in 23 minutes on 9-of-11 shooting (if I’m not dead, kill me again).

It was just the second time this year OSU has been really blown out, with the other coming against Texas A&M back in November. OSU could not hang offensively with the Sooners, and were clearly flummoxed by Young as he split their defense in two all night.

Young can shoot (obviously), but the real issue for Oklahoma State is that when they doubled him up top he was efficient and quick in either finding the open man (and it didn’t matter if they were open or not on Wednesday) or getting through a pair of defenders and hitting one of OU’s bigs for an easy lob.

He seems to almost supernaturally create space on the floor. It’s stunning to watch. It looks as if OU widened its court year over year with how much space the Sooners were playing with offensively on Wednesday.

This is the big conundrum with great shooters, of course, and OSU isn’t the only team that will be waylaid by Young and Co. OSU’s lack of quickness on the perimeter combined with Young’s incredible ability to turn on the jets and shoot a pass to a leaping big man or wide open guard for a 3 was not the greatest combination for OSU fans (or coaches) to experience. 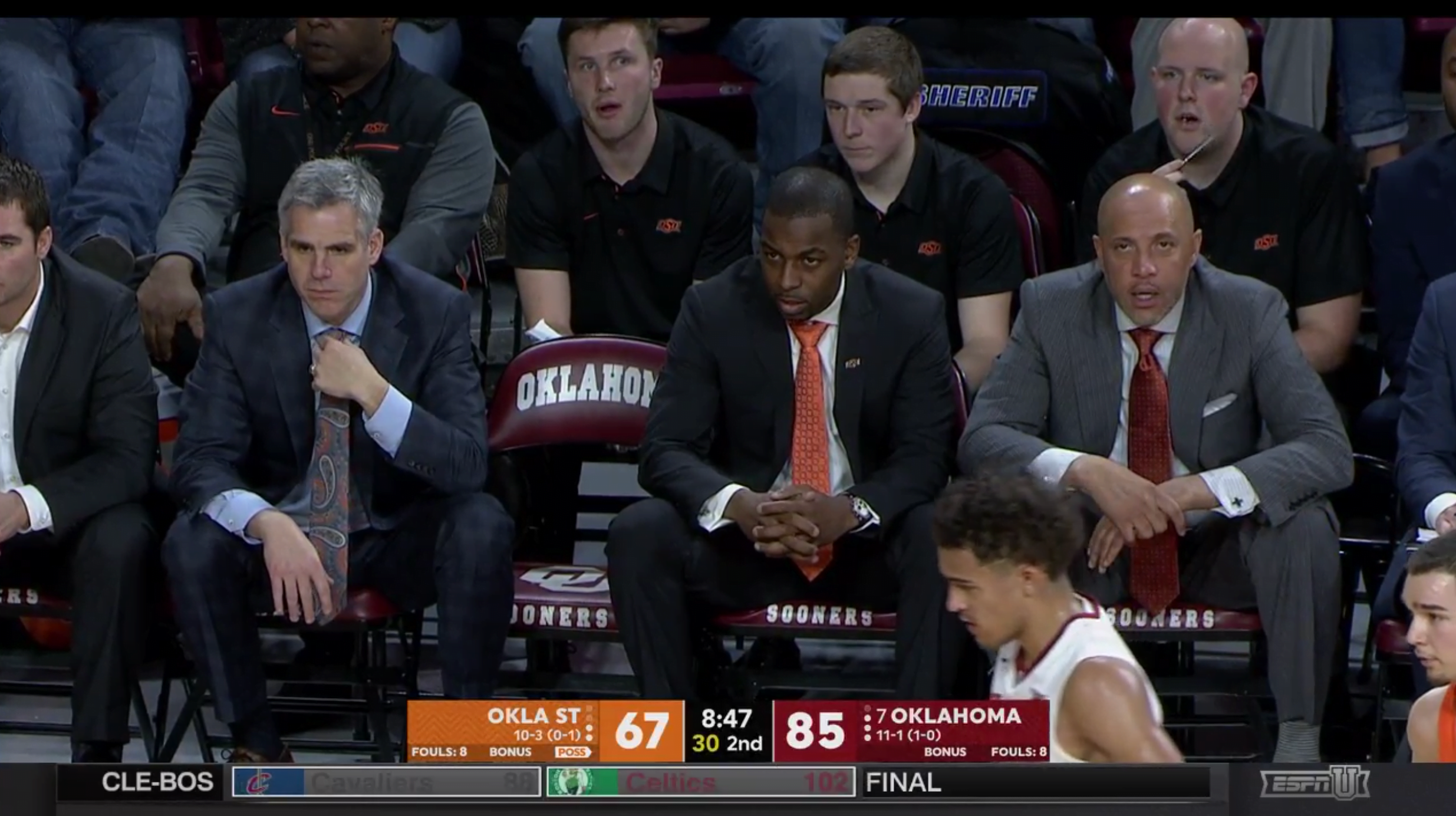 2. Where is Jeffrey Carroll?

Clip shot blanks all night, and this has become a trend against big time teams. Four points against Texas A&M. Three points against Wichita State. He had 15 on 5-of-14 shooting against OU on Wednesday. It’s bigger than that, though. He looks … lost at times. Case in point: OU went on a 23-7 run to open the second half and effectively end the game, and Carroll had three turnovers and a foul in that span. That’s not what you need from your top dog.

Last year, he looked like somebody who had graduated to All-Madden level, somebody who always knew where to be and what to do. This year, he seemingly drifts, often doesn’t flow well with his point guards and can’t find his stroke from deep. It’s not SOS time because he continues to score and be at least somewhat productive, but we should at least pull out the flare gun to see if there’s anything in it.

Bedlam was chippy (as it should be), and that did not bode well for Oklahoma State offensively. They couldn’t spread the floor with anyone other than Dizzy, and OU is just fine with OSU spreading the floor with Dizzy. As a result, OSU was just 9-for-24 on 2-pointers in the first half and wasn’t able to do much offensively until the game was already over late.

They scored a lot because the pace was insane, but nothing came easy early. OSU’s defense is good, but it’s not good enough against top 15 offenses (and especially this OU offense on this night) to make up for its inability to stretch anyone out. That became painfully clear on Wednesday.

Trae Young might be Steph Curry, but it’s Thomas Dziagwa who believes he’s Steph Curry. Dizzy had five 3-pointers on Wednesday and looked at times as if he thought this was a legit shootout between him and Young. Maybe it should have been. He’s OSU’s only consistent outside threat right now (especially without Lindy Waters), and he was the entire offense for uncomfortable stretches in both halves.

Again, this is a great asset to have for OSU. Dizzy is basically Jamal Crawford with wing tats. The obvious problem is that Jamal Crawford isn’t relied upon to carry his team for long stretches offensively. OSU’s offense has to be more robust than it was on Wednesday night.

Kendall Smith wasn’t his best on Wednesday, to put it kindly. I do think him running a pick and roll at the top of the key with Carroll or maybe Lindy or even Cam McGriff can be a real boon to OSU’s offense, but his shot is streaky and he took some more bad ones at LNC (he was 3-of-10 from the field).

Mike Boynton felt compelled to stick Brandon Averette out for most of the second half, which was fine, but Averette has a tendency to get abused on offense when there’s significant pressure from guards who can keep up with his speed.

OSU’s problems on both ends on Wednesday revolved around the point guard. Offensively the playmaking just isn’t there like it was with Jawun Evans. You would have thought Smith could give you 80 percent of that, and sometimes he does. But when he doesn’t, it’s ugly. It’s tough to compete in the Big 12 without a point guard playing at an elite level.

Ultimately, Oklahoma State let the game go during that monstrous second half run from OU that made it 71-49 OU before the 12-minute timeout. That’s partially due to those Carroll turnovers, but it’s also due to the fact that OSU couldn’t get stops. Boynton seems bent on being a team that gets stops when it needs them, and they didn’t even come close for most of the first Bedlam game in Norman tonight.

Mike Boynton said he felt like #OKState played "cautiously" to open the second half. "We didn’t play with the amount of pride that I expect us to play with."