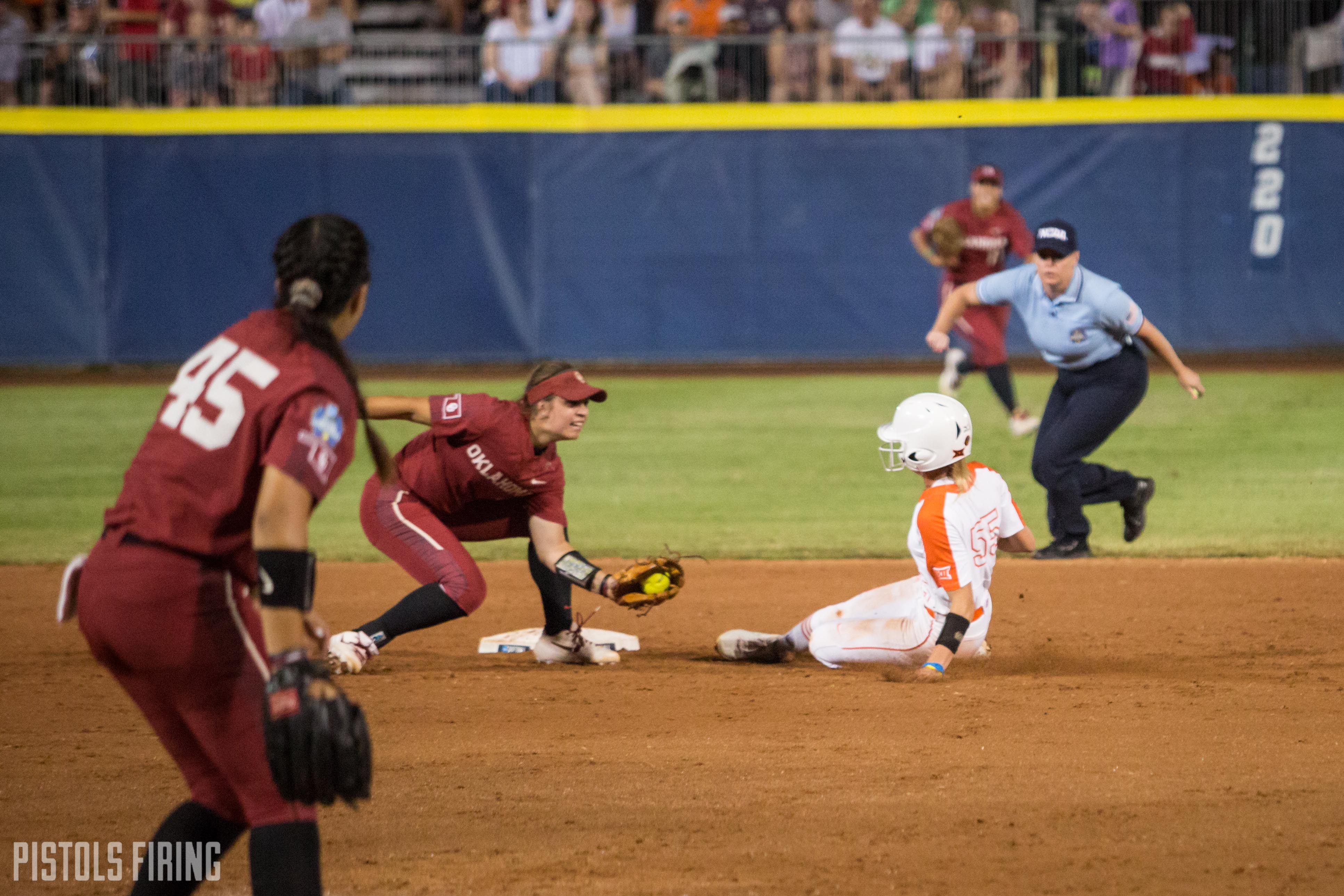 OKLAHOMA CITY — In their first meeting on such a stage, the state’s college softball blue bloods beat the upstart Cowgirls.

The Oklahoma State softball team fell to Oklahoma 6-1 on Friday night in the winner’s bracket of the Women’s College World Series. After a ridiculously emotional game Thursday night, the Cowgirls hit a brick wall in the first inning Friday.

The Sooners scored three runs in the first, and it looked as if the Cowgirls were going to get run out of the building. The Sooners’ scoring started when Jocelyn Alo ripped a single over a leaping Madi Sue Montgomery, scoring Falepolima Aviu from third and Caleigh Clifton from second. Two batters later, Shay Knighten singled up the middle scoring Alo before the Cowgirls got out of the frame with back-to-back outs.

The Cowgirls answered in the bottom of the first when Michaela Richbourg sliced a single to shallow center that scored Rylee Bayless. That’s all the scoring the Cowgirls were able to do, though, and OU put together another three-run frame in the sixth, two coming from bases-loaded walks and the other off a bases-loaded hit by pitch.

Here are five thoughts from a long (but historic) night in OKC.

1. The First Bedlam Game in the WCWS

A Women’s College World Series record of 9,280 crammed into Hall of Fame Stadium on Friday for the event’s first Bedlam.

The game ended up not being that close, but there was a definite buzz in the air especially after a four-run first inning. That buzz got less noticeable in the latter stages of the game, but it was still a historic night where two schools in the same state where the WCWS is played met there for the first time.

“It was exciting,” OU coach Patty Gasso said. “I think our team started to have a little bit of nerves. It’s hard to play the night game because you have to sit around all day and wait, wait, wait. When we got out there, the way they started attacking at the plate set a really good tone.

“Knowing this was part of history, who knows if it will happen again, hopefully it will. But the fact that the fans came out and were enjoying it, rooting for their team is what makes it special.”

2. Who Turned Out the Lights?

In the top of the fifth, OU’s Grace Green was at the plate with two runners on, one out and a 1-1 count when the lights overlooking right field shut off.

For 17 minutes, players danced in their respective team’s huddles, and OU players ran out to right-center waving towels to try to hype up their fans. Word in the pressbox was that a driver ran into a generator, causing the shutdown, but this tweet is a more fun story:

Replicating Thursday’s performance would’ve been near impossible, but Samantha Show had a tough go of it Friday night.

In her first at-bat, Show crushed a ball to center that might have gone higher than it did far, as it dropped into Nicole Mendes’ glove. She struck out in her other two at-bats of the night.

In the circle, Show was fairly solid after the first-inning struggles. After the first, Show threw three more innings where she didn’t allow a run and only two hits while also striking out two.

4. Giselle Juarez is a Buzz Saw

Any time the Cowgirls got something going, OU pitcher Giselle Juarez was there to shut it down.

A junior, Juarez threw six innings, and she allowed the single run and four hits while walking one and striking out 11. She seemed to get better as the game went on, with eight of her strikeouts coming in her final three innings of work.

She is 28-1 on the season, with her only loss coming against Wisconsin earlier this month. Her season ERA is 1.14. Juarez threw in the Sooners game against Alabama on Thursday, going a full seven innings. With the back-to-back victories, she’ll get Saturday off before the Sooners’ next game Sunday.

With the loss, the Cowgirls will play at 6 p.m. Saturday against the winner of Washington and Minnesota, which play at 11 a.m.

The WCWS bracket is a little odd, as the Cowgirls now jump from one side of the bracket to the other. If they win Saturday, the Cowgirls will play UCLA on Sunday and would have to beat the Bruins twice to advance to the finals.

Gajewski said a difficulty of flipping sides of the bracket is that a lot of their preparation entering the tournament was focused on teams on OSU’s original side of the bracket, and now that changes, having to scout three new teams.

“We’re going to have to go get on it and break down some film,” Gajewski said. “We’ve seen all these teams play a bunch, but we put a lot of our time into OU, Florida, ‘Bama. That’s kind of where you’re at. Like I said, we’ll go back. We lost last week, so this isn’t anything new. The great thing is we don’t have to turn around at noon and play. We had to do that last week. We’ll sleep in, get breakfast. Staff will be up working. It’s what we do. It’s why we get paid well to work, put our kids in the best spot to win. We’ll get to face a good team. That’s why they’re still here. They will have already played once. Hopefully that’s an advantage to us.