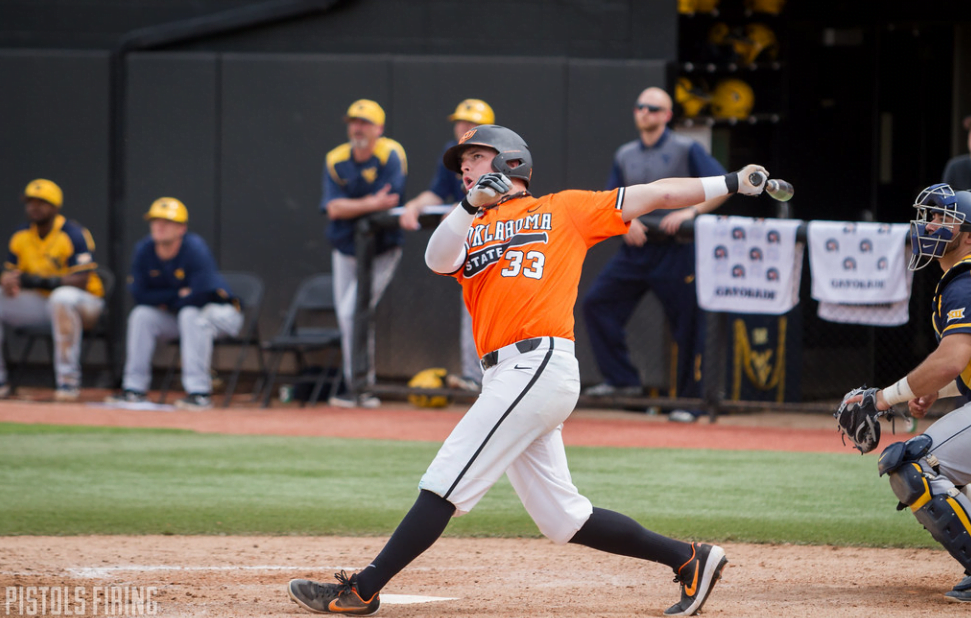 STILLWATER — The Cowboys dominated the Longhorns in every aspect of the game.

The Oklahoma State baseball team defeated Texas 15-0 in Allie P. Reynolds Stadium on Thursday night. The Cowboys advance to 23-13 on the year and 8-5 in Big 12 play. It gives the Cowboys the lead in their three-game series against No. 19 Texas. The teams will meet again at 6:35 p.m. Friday. Here are five thoughts from Thursday’s onslaught.

Texas got nothing and liked it from Jensen Elliott.

Elliott threw a complete-game shutout against the No. 19 team in the country. He allowed only one hit and two walks while striking out seven. He also worked efficiently, throwing only 113 pitches in the outing.

It was Elliott’s first complete game since 2016, the year he received freshman All-American honors. Elliott said he recently started going back to what worked for him that freshman season, and he had a conversation with pitching coach Rob Walton where the two found his arm slot again.

“He was better tonight than at any point he was his freshman year,” OSU coach Josh Holliday said. “That was a dominant performance. He did a great job. He kept a good baseball team off the bases and pitched with tremendous poise and maturity.”

There was a bit of controversy surrounding Elliott’s only hit, and some have said it should’ve been ruled an error. The play in question came in the third inning when Michael McCann singled to short. If we’re honest, I don’t remember much about the play, as in the third inning, I wasn’t exactly thinking no-hitter. But, the ruling didn’t seem to bother Elliott.

“I wasn’t really worried about it,” he said. “If I had a higher vertical, I would’ve made the play. Maybe I’ll work on that for next time.”

2. The Best Insurance Quote a Company Can Give

Starting the bottom of the eighth, the Cowboys had a 5-0 lead, and all they needed to do was get through the frame then get three more outs in the top of the ninth.

Just in case those five runs weren’t enough for Elliott to work with, the OSU bats added 10 more in the eighth.

Walton made Elliott go to the bullpen during the Cowboys’ onslaught so he didn’t go cold and was able to finish the game.

In the past week, Trevor Boone has hit seven home runs.

Boone smashed three homers Thursday, bringing his team-leading total to 13 on the season. He also became the first player in school history to have three three-home run games.

Mama there goes that man again! @TrevorBoone_33 makes history as the only #okstate player to ever have three 3-HR games as he blasts his third ? of the night. ? #BooneBomb #GapBand #GoPokes pic.twitter.com/tJfpQfBh80

“I think it’s just the adjustments we made with the coaching staff,” Boone said. “Just focusing on seeing the ball, getting a good pitch and putting a good swing on it.”

His work started in the second with a solo shot to center. His other two home runs went into the wind to left field.

He finished Thursday 4-for-5 with five RBIs and four runs scored. In the Cowboys past two series openers, he has hit six home runs. PFB’s Kyle Boone claimed Trevor Boone on Twitter.

Based off Trevor’s homerun frequency and his startlingly good looks, I feel fairly confident saying we are brothers. https://t.co/EieufuuKNR

4. Texas Didn’t Do Itself Any Favors

As noted in that brick of a paragraph detailing OSU’s eighth inning, Texas had a hard time getting the ball from the mound to the catcher.

OSU scored five runs Thursday without making contact with a bat to the ball, meaning through passed balls, wild pitches and bases-loaded walks.

The most recent Cowboy to hit a home run gets to wear a cowboy hat in the dugout. After his first home run, Trevor Boone got to where that hat for all of a few seconds before Alix Garcia hit the first ball thrown to him off the scoreboard in right.

“I had it on, and as soon as I stepped in the dugout, someone snatched it off my head,” Boone said. “I was like, ‘What in the world?'”

It was Garcia’s sixth home run of the year. He has played in only 25 of the Cowboys’ 36 games this season, leaving him with a .592 slugging percentage. That ranks second on the team behind Boone.

Garcia was also making plays at first base. I didn’t get an official count, but Garcia found himself in a full split a handful of times at Thursday night, making sure Texas stayed off the bags.

“That’s part of his job over there,” Holliday said. “Knocking in runs is one thing and preventing runs is another, so you want to be solid on both sides of the ball.”