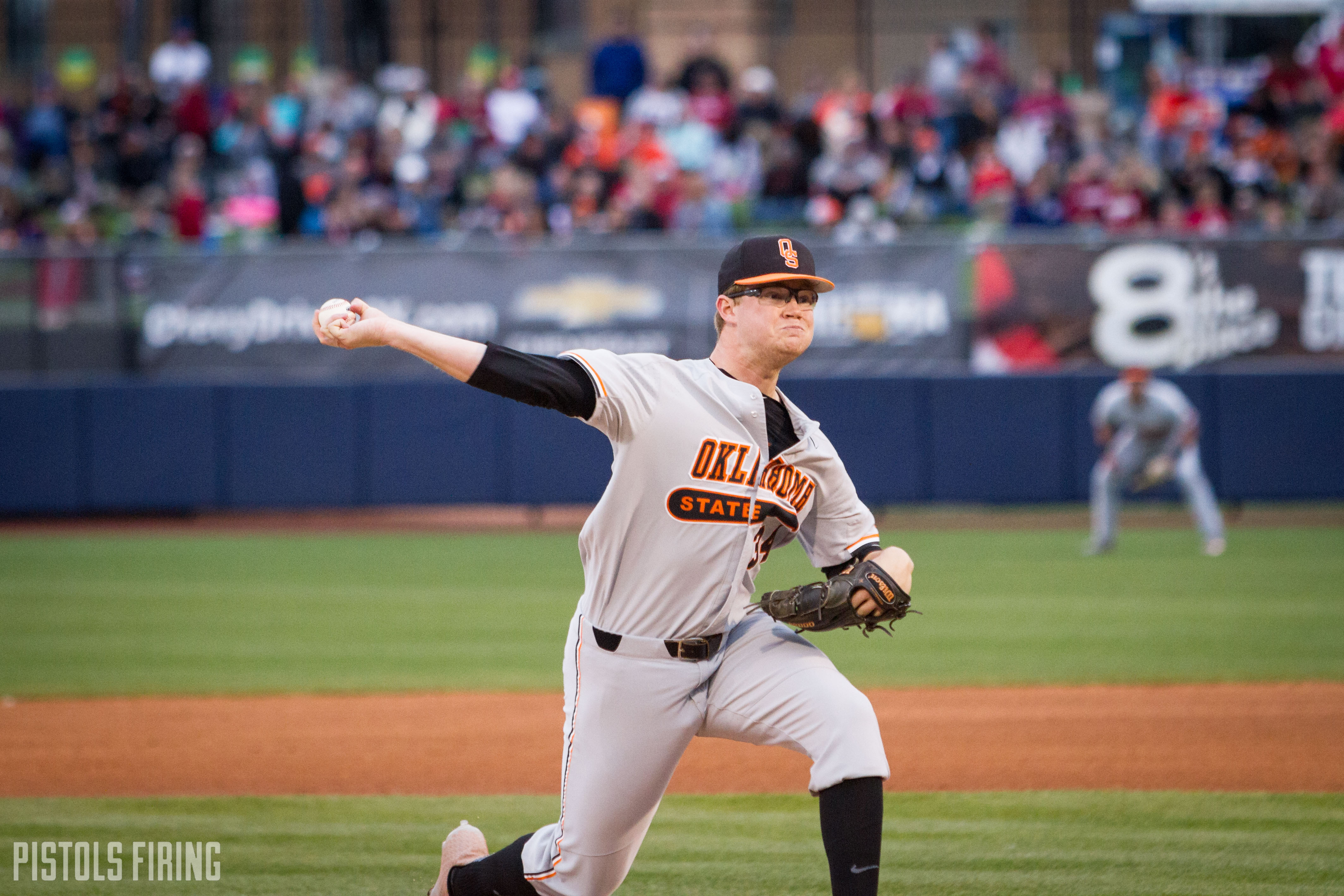 TULSA — For the ninth straight time, the Cowboys walked away with a Bedlam victory.

The Cowboys scored all they needed in the first inning, hitting three home runs in a seven-pitch span. Jensen Elliott took over from there, and the Cowboys take a series lead to Oklahoma City on Saturday night. Here are five thoughts from Game 1 of the 2019 Bedlam Series.

It’s been an up-and-down four years for Jensen Elliott at Oklahoma State.

A freshman All-American in 2016, Elliott made only four starts in 2017 before undergoing Tommy John surgery. That injury kept him out most of 2018, too, but now as a junior (he received a medical redshirt in 2017), Elliott has returned to the dominant pitcher he started his collegiate career as.

Elliott threw his second complete game of the season Friday, where he allowed five hits while striking out five, as well. He was perfect through four when Tyler Hardman hit a single to left field.

Elliott said his sinker was working for him Friday night. He didn’t keep it low enough a few times in the ninth where he allowed back-to-back hits to start the inning. OSU pitching coach Rob Walton came to the mound, and it looked as if Elliott’s day might end. But he was given the opportunity to finish.

Including his stellar game Friday, Elliott’s past four outings also include a one-hit, complete-game shutout against Texas and a seven-inning, two-hit shutout against Oregon State.

Although he is in his fourth season, Elliott has another year of collegiate baseball left if he wants it. But, if he continues what he is doing, there isn’t much of a need for it.

2. Look Out on the Right-Field Lawn

OU right fielder Brady Harlan had a nice view of baseballs flying over his head.

The Cowboys hit four home runs Friday night. All were solo shots, and all were to right field. What’s even more odd is the first three came consecutively.

After Hueston Morrill grounded out to start the game, Christian Funk smacked the first ball he saw. It was a stiff gust from landing on Elgin Avenue.

Colin Simpson was next in the lineup. Simpson took a ball before his moonshot to the crowd on the right field lawn.

Up next was Andrew Navigato. His didn’t quite have the power of the first two, and it looked as if Harlan had a beat on it. However, there was a slight breeze toward that right field side Friday night, and it carried the ball that little bit extra over Harlan’s outstretched glove and into the Cowboys’ bullpen.

“That was exciting to watch and be a part of,” Funk said. “I just found a pitch I could drive, and did what I should do with that pitch. The guys behind me, they’re both great hitters. It was just awesome to see that. That was a lot of fun.”

Deja vu looked imminent in the fifth inning when Funk drilled his second home run of the day to right, but Simpson struck out to end the inning.

The Cowboys have a home run Cowboy hat for the most recent player to hit a home run, and that thing needs a rest after the season because OSU is up to 66 homers.

3. This is a Veteran Group of Cowboys

I haven’t put too much thought into this this season, but OSU is kind of an old group.

Freshman second baseman Hueston Morrill is the only underclassman Cowboy who played Friday night, doing so with six juniors and three seniors.

4. ONEOK is a Beauty

I’m an Oklahoma City truther, and in a world where everything must be compared to something else, nostalgia will always allow me to say Bricktown Ballpark is the state’s best. With that said, ONEOK is gorgeous.

My favorite thing about the park is the view of the Tulsa skyline over the outfield. Friday was my third time at the ballpark, all having been Bedlam baseball games where I spent more time in the pressbox than anywhere else. With that said, what I’ve seen of the concourse is also nice. The entire thing is seemingly a concession stand, but in a good way.

ONEOK opened in 2010, but it still has the new-park feel. It’s pretty cool that one state with no professional team could have two of the nicer minor league parks in the country.

The Sooners are squarely on the bubble in terms of postseason play, and scoring one run is a bold strategy of getting off said bubble.

The Cowboys on the other hand are fighting to host a regional. The Pokes entered Friday’s game ranked 11th in the RPI and hope to be one of the 16 teams playing at home in the regional round.

Parker Scott is the Pokes’ projected starter for Saturday’s game in Oklahoma City. Scott has a team-best 1.65 ERA (among Cowboys with at least eight innings pitched) through his 11 appearances this season. Cade Cavalli will likely start opposite Scott. Cavalli has a 3.10 ERA through 52 1/3 innings pitched.

“Each game is its own game,” OSU coach Josh Holliday said. “Get ready to play the right way. We have great respect for our opponent, that’s for sure. So, we prepare really well. Then these kids are going out and competing at a high level. That’s just a compliment to the players.

“Tomorrow will be another chapter in this great challenge. We’ll rest and get ready to come out tomorrow against a really good OU team.”